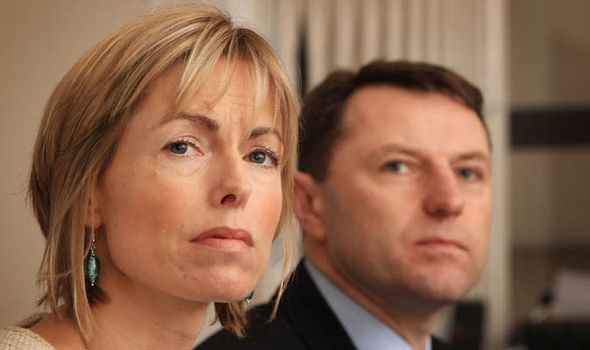 A SEX fiend who speaks English and wears a surgical mask is understood to be the kidnapper Portuguese police now fear may have snatched Madeleine McCann.

In one attack he broke into a British family’s home and loomed over a seven-year-old girl who woke up and asked “Is that you Daddy?” and he replied “Yes” in a foreign accent.

To me this sounds like Gerry McCann. A surgical mask which any cardiovascular surgeon would have easy access to, and a foreign accent, for a seven year old, could include someone from Glasgow in Scotland.

The seven-year-old girl from the UK woke to find the pervert laying next to her in bed wearing a medical mask.

Detectives have discovered a creep carried out nearly 30 attacks within a 40-mile radius of the holiday apartment in Praia da Luz where Maddie vanished from 12 years ago today.

It should be noted that the McCanns developed a relationship with well known politician Clement Freud who had a villa close to the McCann’s.

Writing about their first meeting – two months after Madeleine vanished – Kate wrote in her book Madeleine: “I’m usually very intimidated by people with brains the size of planets, but Clement was incredibly warm, funny and instantly likeable.”

He had cooked a watercress and egg salad followed by a chicken and mushroom risotto which was “the best risotto we’ve ever tasted before or since”.

Kate and Gerry were two months into the search for their daughter when they received the letter inviting them for the meal at his holiday home in Praia da Luz, a short drive from the Ocean Club, where Madeleine went missing on May 3, 2007.

He invited them for dinner again in September that year but they cancelled because they had been named arguidos in the investigation.

According to the Freud family, however, Sir Clement was in the UK at the time of Madeleine’s disappearance in May 2007.

Since the allegations came to light in 2016, Kate and Gerry McCann haven’t publicly commented about their friendship with the late MP.

The supposed suspect crept into Algarve properties rented by families and many victims were British.

And a judicial source is reported to have confirmed the unnamed man was definitely in Portugal at the time the three-year-old suddenly disappeared.

And the insider also alleged he was KNOWN to local cops and had previously been investigated on suspicion of involvement in paedophile cases.

A chilling reconstruction features in the final episode of Netflix’s recently released eight-part documentary The Disappearance Of Madeleine McCann.

Portuguese cops are believed to be working on a tip off from Scotland Yard about an alleged foreign paedophile.

Maddie’s parents Kate and Gerry are kept updated of any significant new development in the Met Police investigation, aided by their foreign counterparts.

But their spokesperson Clarence Mitchell declined to discuss the latest claim, saying: “We will not be commenting whatsoever on operational details in either Britain or Portugal.

“We are not in a position to talk about it.”

A friend of the McCann’s added: “It is just odd that news of this possible new lead has come out of the anniversary of Madeleine’s disappearance and we’re wondering if it could have been made up.”   [You don’t say]

Investigators Anthony Summers and his wife Robbyn Swan, who penned a book about the case and narrated the Netflix doc, said the masked intruder was one of at least 12 suspects police are probing.

Anthony said: “From what the little girls told their parents afterwards, the man had come into the room wearing a sort of medical mask. He had a funny smell.”

Robyn said the holiday company that operated the Ocean Club resort where the McCanns were staying had refused to comment on whether or not they knew of these sexual assaults.

She said the Foreign and Commonwealth Office had declined to comment on why British holidaymakers had not been warned.

Of the Maddie case she told the documentary: “Would they have left their children alone had they known there was a sexual predator about?”

Maddie’s parents Kate and Gerry have already slammed the new Netflix documentary saying it “won’t help” the search for their daughter.

A Met Police spokesperson said: “We have no response to this – we will not be giving a running commentary of an ongoing investigation.”

The new suspect’s nationality was not revealed in today’s reports.

Respected news website Expresso claimed: “The PJ (Policia Judiciaria) is following a tip received from Scotland Yard and sent recently to Portugal relating to the Madeleine McCann case, Expresso has learned from a judicial source.

“According to the source, it relates to a complaint made about a foreigner who was in Portugal in May 2007, when the English girl disappeared from a tourist complex in Praia da Luz.

“The suspect is no stranger to Portuguese police.

At the time the PJ investigated him on suspicion of being involved in cases of paedophilia but in light of the information coming from London, the investigators are looking into this case in more detail.”

The source told the website: “This is a line of investigation that is still open. Like others.”

The PJ are already said to have spoken to witnesses who could help in connection with the new lead.

Asked this morning to comment on the latest reports in Portugal, including the Correio story about Portuguese police having a “new suspect” and “new lead,” Portugal’s Attorney General’s office repeated an answer it gave last month to a question about whether Scotland Yard had formally requested more help via rogatory letters.

A spokesman said: “Regarding these facts, as is public knowledge, an inquiry in the Portimao section of the Faro DIAP Public Prosecutors Office is ongoing. It is under investigation.”

The news coincides with the 12th anniversary of Madeleine’s disappearance as the youngster’s parents vowed to carry on looking for their daughter “for as long as it takes”.

“As much as we’d like to fast forward the first couple of weeks of May, there’s no getting around it.

“The months and years roll by too quickly; Madeleine will be sixteen this month. It’s impossible to put into words just how that makes us feel.

“There is comfort and reassurance though in knowing that the investigation continues and many people around the world remain vigilant.

“Thank you to everyone who continues to support us and for your ongoing hope and belief.”

Three-year-old Madeleine McCann vanished during a family holiday in Praia da Luz, Portugal, in May 2007.

She had been left sleeping alone with her younger twin siblings while her parents were dining in a nearby tapas restaurant with pals at the seaside complex.

Yesterday it was revealed Scotland Yard has asked for more funding as it continues to follow up leads in the disappearance.

British police launched their own investigation,Operation Grange, in 2013 after a Portuguese inquiry failed to make progress.

Force bosses have been applying for funding from the Home Office every six months to continue the inquiry, which has cost about £11.75 million , so far.

Earlier today, Kate joined friends and well wishers to remember her daughter on the painful 12th anniversary of her disappearance.

Last November, a further £150,000 was granted  and Maddie’s parents told of their delight at being given fresh hope.