Two tankers were apparently attacked in the Gulf of Oman on Thursday, less than a month after four other ships were struck in the region.

The ships — one carrying oil and the other transporting a cargo of chemicals — were struck in international waters near the strategically important Strait of Hormuz. All crew members were evacuated and were safe, according to the owners of the two ships.

The vessels were hit “at or below the waterline, in close proximity to the engine room,” said the International Association of Independent Tanker Owners (Intertanko). “These appeared to be well-planned and coordinated” attacks.

US Secretary of State Mike Pompeo blamed Iran for the attacks, saying the assessment was based on intelligence but offered no evidence to support his claim.

“It is the assessment of the United States that the Islamic Republic of Iran is responsible for the attacks,” Mr Pompeo said.

“This is based on intelligence, the weapons used, the level of expertise needed to execute the operation, recent similar Iranian attacks on shipping, and the fact that no proxy group operating in the area has the resources and proficiency to act with such a high degree of sophistication.”

Blog Editor: This could fit several countries in the region e.g Saudi Arabia, Israel and even the US Navy?

Jonathan Cohen, acting US ambassador to the United Nations, said he echoed Pompeo’s comments in a private meeting of the UN Security Council, describing the attack as “another example of Iran’s destabilizing activities in the region.”

The security council declined to make any formal reaction Thursday.

Kuwait’s UN Ambassador, Mansour al-Otaibi, said his country was pleased the topic was discussed. He said no country produced any evidence that might point the finger at those responsible.

The crew of USS Bainbridge reported they saw an unexploded limpet mine on the side of one of the ships, according to a US defense official familiar with the matter. A limpet mine is a type of mine attached to the hull using magnets.

More US Navy ships are expected to head to the area in the coming hours for security, patrolling, helping mariners get back to port and potentially assist in arranging for tankers to be towed to port, the source said. that is where

Limpet mines were also suspected to have been used in the May attack on four oil tankers off the coast of the United Arab Emirates. The UAE concluded that a “state actor” is the most likely culprit and chemical analysis of the debris recovered in May revealed “it was highly likely that limpet mines were deployed.”

The Norwegian Maritime Agency said that three explosions were reported on board the Marshall Islands-flagged “Front Altair” oil tanker, which is owned by the Bermuda-based Norwegian company Frontline. The company said that a fire broke out after an explosion and that the cause of the blast was unclear.

The first shot hit the tanker above the sea level and the ship caught fire briefly before it was extinguished, he said. Yuube said that the incident happened off the Emirati port of Fujairah, near the Strait of Hormuz.

The vessel was carrying a shipment of methanol, he said. 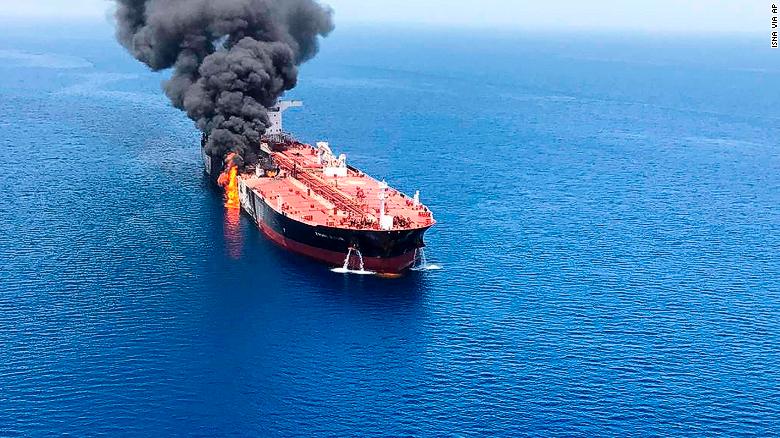 A photo released by Iranian media purports to show the fire that broke out on the Front Altair oil tanker in the Gulf of Oman on Thursday. All 21 Philippine crew members were evacuated Yuube added. The ship’s Singapore-based management company, BSM, said that a sailor had been injured and that the vessel had suffered damage to its hull.

In May, four oil tankers were attacked off the coast of the United Arab Emirates, an incident that the US suspected was the responsibility of Iran. 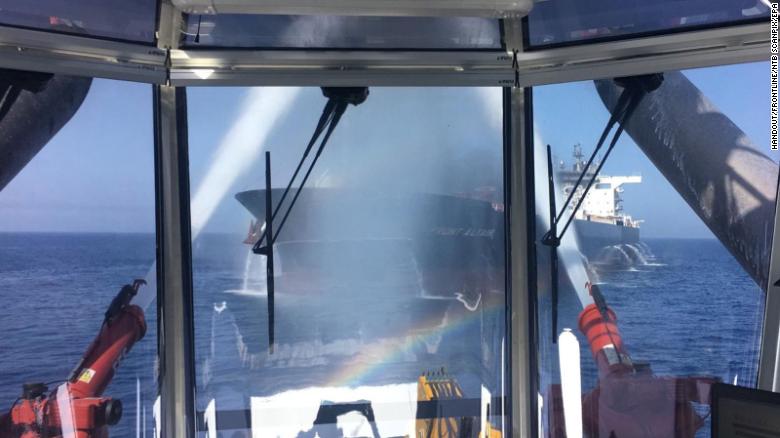 In this photo from Frontline, the owner of the crude oil tanker “Front Altair” firefighters work to entinguish the blaze aboard the ship in the Gulf of Oman on Thursday.

The Japanese government said both tankers were carrying “Japan-related” cargo. Japan’s Prime Minister Shinzo Abe is currently on a visit to Iran.

Question: Who would seek to sabotage the talks between Iran and Japan? Iran?

Japan, has been importing roughly 5 percent of its oil from Iran in recent months.

The United States, however, pursued a maximum pressure campaign against Iran and put an end to all sanction waivers for all Iranian oil buyers, beginning in May. Japan obliged and stopped importing oil from Iran

The 44 sailors and crew members of the two ships affected by the incident were rescued by Iran’s Navy and taken to the Iranian Island of Jask, according to Iran state-run news agency IRNA, citing Iranian informed sources.

Oil prices surge after attacks on tankers near the Iranian coast

The report claimed the ships were “targeted” but did not detail by whom, or what.

The US government said in a tweet the US Navy is providing assistance in the area.

According to a US defense official, the USS Bainbridge was nearby when the incident happened and a tug ferried crew members of the “Kokuka Courageous” to it.

The official told CNN that they are still trying to determine the cause of the incident and had not ruled out the idea that the ships might have hit a mine in the water, orwere attacked by a projectile. 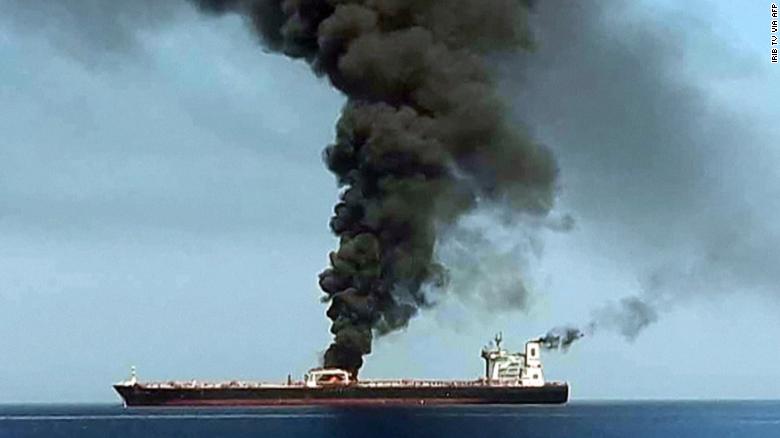 This still, obtained by AFP from Iranian State TV IRIB, purports to show smoke billowing from a tanker said to have been attacked off Oman. CNN has not independently verified this image.United Nations Secretary-General Antonio Guterres said the incident was of “deep concern.”

“Facts must be established, and responsibilities clarified. If there is something the world cannot afford, it is a major confrontation in the Gulf region,” he said.

Officials are continuing to investigate the cause of the incident, which follows the attacks on four oil tankers in the United Arab Emirates’ port of Fujairah in May.

Initial findings from an international investigation on the attack last month, concluded that a “state actor” was the most likely culprit.

The UAE, Saudi Arabia and Norway told the UN Security Council last week that there are “strong indications that last month’s attacks were part of a sophisticated and coordinated operation carried out with significant operational capacity.”

Of the four commercial ships targeted in the May 12 attack, one was flying a UAE flag, two were tankers owned by Saudi Arabia, and the fourth was a Norwegian tanker. The four ships were targeted near the strategic Fujairah port, in what the UAE described as a “sabotage attack.” 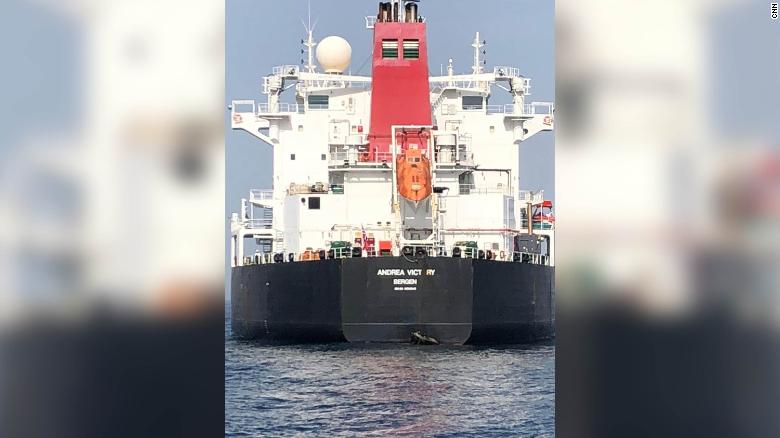 Damage sustained to the hull of Norwegian tanker Andrea Victory is seen following the attack in May.

US national security adviser John Bolton has blamed Iran for the attack, without offering evidence that Tehran was responsible. “I think it is clear these (attacks) were naval mines almost certainly from Iran,” Bolton told reporters during a visit to Abu Dhabi in late May.

Intertanko said the apparent attack “unacceptably threatens the lives of innocent seafarers, the fragile environment of the region and the economies of the world.”

Iran will get the blame, but the Gulf of Oman truth is likely a lot murkier

In a printed statement describing the conclusions, the UAE, Saudi Arabia and Norway said the attacks required trained divers, explosive charges placed under the waterline, near the engines, so as to not sink the ships or detonate their cargoes, which indicated a knowledge of the design of the targeted ships.

The countries say rapid withdrawal of the plotters by fast boats indicated understanding of the geographic area.