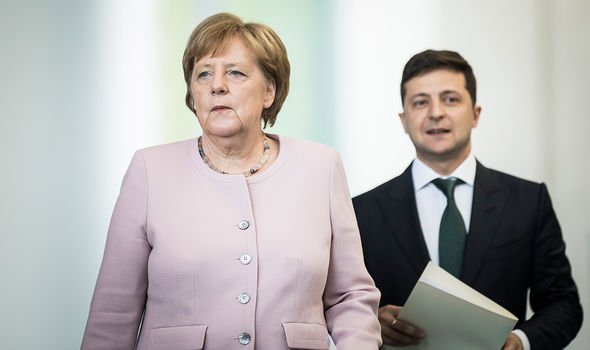 Merkel is known for being the most powerful woman in Europe (Image: GETTY )

ANGELA Merkel sparked fears for her health after she was seen shaking during a military ceremony to welcome the new Ukrainian president to Berlin on Tuesday.

Chancellor Angela Merkel is known for that no-nonsense, stoic approach to life that we’ve come to associate with Germany.

She’s held office for the last 14 years, and during that time has never shown stress and rarely taken a sick day.

So when she was filmed visibly shaking during a military parade welcoming the new Ukrainian president to Berlin, everyone was very concerned, reports The Telegraph.

Now for some speculation.

As is usually the case when politicians exhibit any kind of illness, online commentators have descended on Merkel, with alternative explanations ranging from the unlikely (she might have Parkinsons; you’d see a slower, less pronounced shake emanating from one side of the body) to the truly ridiculous (she hates her own country’s national anthem and couldn’t bear to listen to it.)

Merkel held a press conference after the parade where she suggested that it was all due to dehydration.

“I’ve drunk three glasses of water in the meantime, clearly that was what caused it. And in that respect I’m doing much better,” she said. Colleagues were quick to point out that Germany is in the middle of a serious heat wave with temperatures reaching 30 degrees centigrade.

Dr. Mike Fitzpatrick weighed in with a different theory.

“I read that there’d been some mention of dehydration but I don’t think it looks like that to me. You wouldn’t normally get shaking like that with dehydration. If you were starving, maybe, but thirst wouldn’t do that to you.”

Dr Fitzpatrick is mystified by the idea that Merkel says she was fine after a couple of glasses of water. “Honestly, to me it looks like an infection. Sometimes when you have an infection, you’ll find the body will shake.”

Such rigors are caused by a fever: when the body experiences a sudden increase in temperature, the sufferer will feel like they’re freezing and start to shiver very intensely.

He also says it could be malaria, but that is unlikely.

Whatever it was, I’m sure she’ll power through it.

Concern is now growing over the health of Angela Merkel after the German Chancellor was overcome by a shaking fit for the second time in a little over a week on Thursday.

Eight days after footage showed Ms Merkel desperately trying to maintain composure as she shook from head to foot at a reception for the Ukrainian president, she has suffered another bout of trembling.

Footage from Thursday morning shows Ms Merkel’s legs shaking as she stands through a swearing-in ceremony in Berlin for the country’s new justice minister, Christine Lambrecht.

Ms Merkel can been seen clutching her arms in an attempt to control herself while glancing uncomfortably to her side. An aide then offers her a glass of water which she turns down.

The chancellor looks wobbly throughout the entire video of roughly one minute and ten seconds, which was shared by the German Press Association. According to journalists present at the occasion, the 64-year-old quickly regained her composure after the ceremony was over.

Ms Merkel’s office immediately moved to dampen speculation that the incident was the symptom of an underlying health problem.

“The chancellor is doing well,” spokesman Steffen Seibert said. Mr Seibert also made clear that Mrs Merkel would be flying to Japan later on Thursday to attend the G20 summit in Osaka.

Last week Mrs Merkel could be seen shaking during a ceremony to welcome President Volodymyr Zelenskiy to Berlin. The jitters led to immediate concern over the veteran chancellor’s health.

Abraham Lieberman wrote a classic treatise entitled, ‘Adolf Hitler had post-encephalitic Parkinsonism’ in 1992 that was published in the journal Parkinson’s Disease & Related Disorders.[5]

Kuru is a rare and fatal nervous system disease. Its highest prevalence occurred during the 1950s and 1960s among the Fore people in the highlands of New Guinea.

The Fore people contracted the disease by performing cannibalism on corpses during funeral rituals.

The name kuru means “to shiver” or “trembling in fear.”

The symptoms of the disease include muscle twitching and loss of coordination. Other symptoms include difficulty walking, involuntary movements, behavioural and mood changes, dementia, and difficulty eating. The latter can cause malnutrition. Kuru has no known cure. It’s usually fatal within one year of contraction.

The identification and study of kuru helped along scientific research in a number of ways. It was the first neurodegenerative disease resulting from an infectious agent. It led to the creation of a new class of diseases including Creutzfeldt-Jakob disease, Gerstmann-Sträussler-Scheinker disease, and fatal familial insomnia. Today the study of kuru still impacts research on neurodegenerative diseases.

What are the symptoms of kuru?

Symptoms of more common neurological disorders such as Parkinson’s disease or stroke may resemble kuru symptoms. These include:

It’s usually preceded by headache and joint pain. Since these are common symptoms, they are often missed as clues that a more serious disease is underway. In the first stage, a person with kuru exhibits some loss of bodily control. They may have difficulty balancing and maintaining posture. In the second stage, or sedentary stage, the person is unable to walk. Body tremors and significant involuntary jerks and movements begin to occur.

In the third stage, the person is usually bedridden and incontinent. They lose the ability to speak. They may also exhibit dementia or behavior changes, causing them to seem unconcerned about their health. Starvation and malnutrition usually set in at the third stage, due to the difficulty of eating and swallowing. These secondary symptoms can lead to death within a year. Most people end up dying from pneumonia.

What are the causes of kuru?

Kuru belongs to a class of diseases called transmissible spongiform encephalopathies (TSEs), also called prion diseases. It primarily affects the cerebellum — the part of your brain responsible for coordination and balance.

Unlike most infections or infectious agents, kuru is not caused by a bacteria, virus, or fungus. Infectious, abnormal proteins known as prions cause kuru. Prions are not living organisms and do not reproduce. They are inanimate, misshapen proteins that multiply in the brain and form clumps, hindering normal brain processes.

Creutzfeldt-Jakob, Gerstmann-Sträussler-Scheinker disease, and fatal familial insomnia are other degenerative diseases caused by prions. These spongiform diseases, as well as kuru, create sponge-like holes in your brain and are fatal.

You can contract the disease by eating an infected brain or coming into contact with open wounds or sores of someone infected with it. Kuru developed primarily in the Fore people of New Guinea when they ate the brains of dead relatives during funeral rites. Women and children were mainly infected because they were the primary participants in these rites.

The New Guinea government has discouraged the practice of cannibalism. Cases still appear, given the disease’s long incubation period, but they are rare.

How is Kuru diagnosed?

Your doctor will perform a neurological exam to diagnose kuru. This is a comprehensive medical exam including:

Tests such as electroencephalogram (EEG) are used to examine the electrical activity in your brain. Brain scans such as an MRI may be performed, but they may not be helpful in making a definitive diagnosis.

What are the treatments for Kuru?

There is no known successful treatment for kuru. Prions that cause kuru can’t be easily destroyed. Brains contaminated with prions remain infectious even when preserved in formaldehyde for years.

What is the outlook for Kuru?

People with kuru require assistance to stand and move and eventually lose the ability to swallow and eat because of symptoms. As there is no cure for it, people infected with it may lapse into a coma within six to 12 months after experiencing initial symptoms.

The disease is fatal and it’s best to prevent it by avoiding exposure.

One thought on “What is the Cause of Angela Merkel’s Shaking?”