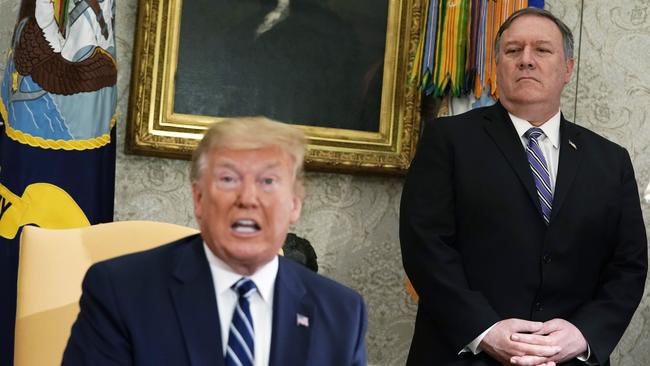 US Secretary of State Mike Pompeo looks on as President Donald Trump speaks during a meeting with Canadian Prime Minister Justin Trudeau in the Oval Office on Thursday.Image:Getty

Update (0905ET): President Trump has tweeted, in an extreme show of transparency, why he decided against airstrikes on Iran:

“President Obama made a desperate and terrible deal with Iran – Gave them 150 Billion Dollars plus I.8 Billion Dollars in CASH! Iran was in big trouble and he bailed them out. Gave them a free path to Nuclear Weapons, and SOON. Instead of saying thank you, Iran yelled ‘Death to America’.

I terminated deal, which was not even ratified by Congress, and imposed strong sanctions. They are a much weakened nation today than at the beginning of my Presidency, when they were causing major problems throughout the Middle East. Now they are Bust!

On Monday they shot down an unmanned drone flying in International Waters. We were cocked & loaded to retaliate last night on 3 different sights when I asked, how many will die. 150 people, sir, was the answer from a General.

10 minutes before the strike I stopped it, not proportionate to shooting down an unmanned drone.

I am in no hurry, our Military is rebuilt, new, and ready to go, by far the best in the world. Sanctions are biting & more added last night. Iran can NEVER have Nuclear Weapons, not against the USA, and not against the WORLD!”

We are sure Bolton and his warmongering friends will be upset that after all this instigation, Trump still won’t pull the trigger, but perhaps this is the less-warmongery president that many voted for?

President Trump reportedly gave the order to attack Iran Thursday night in response to its downing of a US drone that Washington claims was in international waters at the time. The US went so far as to maneuver planes and ships into position before the strike was called off.

“The operation was underway in its early stages when it was called off, a senior administration official said. Planes were in the air and ships were in position, but no missiles had been fired when word came to stand down” the NYT reports, citing an unnamed official.

The New York Times and WSJ report, citing a handful of senior officials, that the president was prepared to attack a number of Iranian targets, including radar and missile batteries. However, he eventually gave the word to stand down, with  the NYT reporting that Trump chose to pull US military forces back, though it isn’t clear why.

Earlier in the day, Trump said during a press conference with Canada’s Justin Trudeau that it was possible that a ‘rogue’ general had authourized the drone take-down, and that the whole incident might be some kind of mistake. The strike was still in motion as late as 7 pm ET (just before dawn Iran time), and officials were surprised when it didn’t happen, given the intense discussions between top national security personnel. 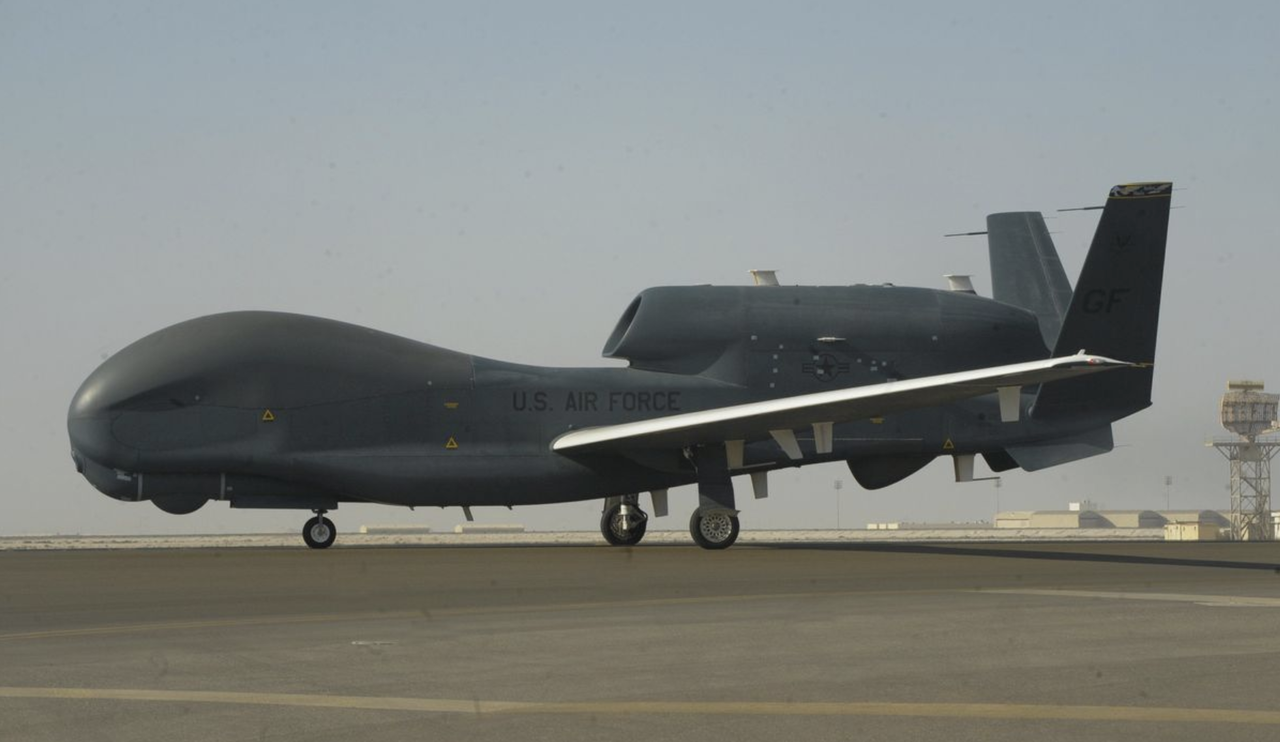 Reuters confirms the big picture, reporting that a senior administration said US warplanes took to the air and ships were put in position for a retaliatory attack only for an order to come to stand down, without any weapons being fired. Strikes had been set for early in the day to minimize harm to civilians and the military, and it was unclear if the administration would move ahead with attacks at a later date. Trump made clear that the situation would have been much more tense if the unmanned $130 million surveillance drone had been flown by a pilot. Washington had warned Tehran of the attack via Oman.

The attack would have been the third strike ordered in the Middle East by Trump, following two missile strikes in Syria in 2017 and 2018. It wasn’t clear whether Trump simply changed his mind on the attacks, or whether the military was embracing a different strategy.

Trump’s national security advisers split about whether to respond militarily. Senior administration officials said Trump’s neocons – Secretary of State Mike Pompeo, National Security Advisor John Bolton and CIA Director Gina Haspel – predictably had favored a military response. But top Pentagon officials cautioned that such an action could set off a spiraling escalation that could draw in American forces in the region. 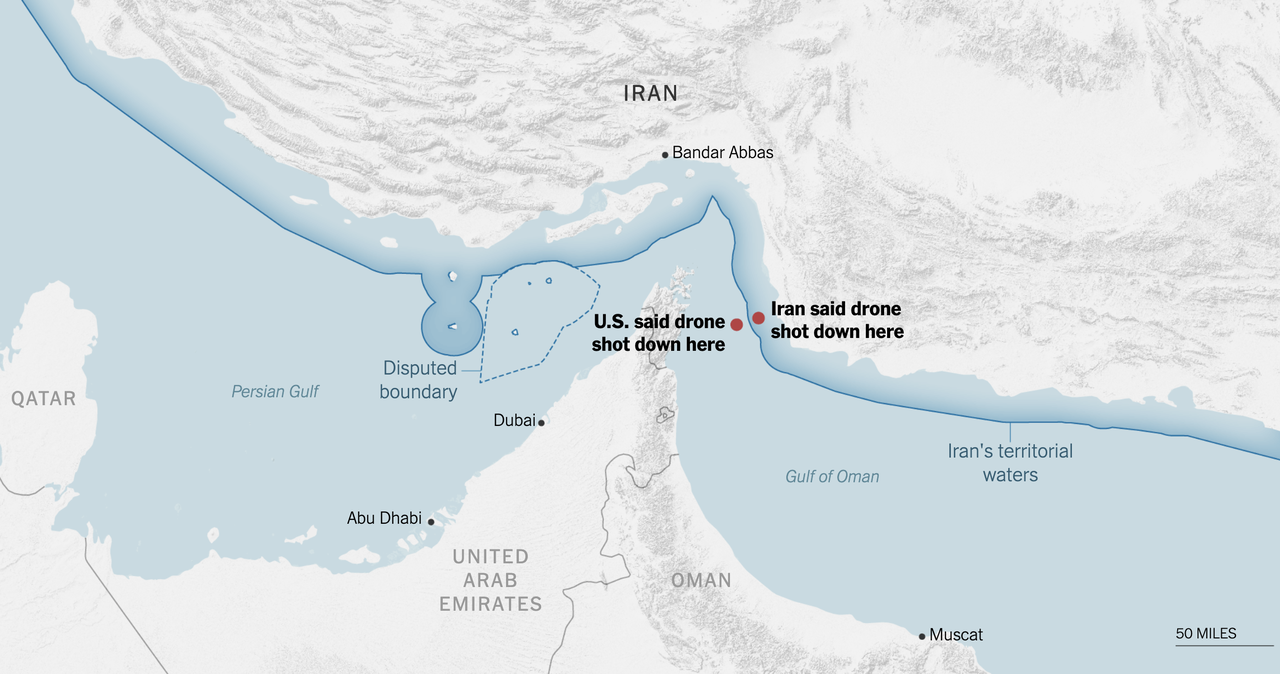 As the news of possible military action against Iran emerged, the FAA issued an emergency notice barring US airlines from flying in airspace over parts of the Gulf.

“All flight operations in the overwater area of the Tehran flight information region…above the Persian Gulf and Gulf of Oman only are prohibited until further notice due to heightened military activities and increased political tensions,” the FAA said, per the FT.

The FAA order came as United Airlines suspended its Mumbai to Newark flight that passes over Iran.

For what it’s worth, Trump’s decision to cancel the strike will please international officials who had urged the US to exercise restraint.

Chinese Foreign Ministry spokesman Lu Kang on Friday urged the US and Iran to resolve issues through dialogue in response to a question Friday about reports of an aborted American military strike.

After the strike was called off, Washington reportedly followed up with a ‘show of strength’ to the Iranian regime that involved running flights of B-52 bombers (which were stationed in the area after tensions started flaring) across the Persian Gulf. 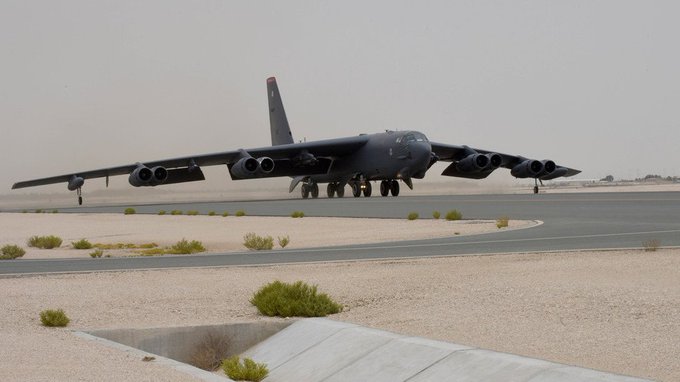 #BREAKING: As a show of force to #Iran‘s Islamic Regime, #USAF is now flying a pair of B-52H bombers with 60-0032 & 60-0058 serial numbers escorted by four F-15Cs over #PersianGulf almost a day after shot-down of #USNavy‘s RQ-4A drone over #Oman Sea near #HormuzStrait by #IRGC.

Still, with Iran set to breach its limits on enriched uranium set out in the Iran deal within the next few days, the prospect of military escalation is hardly off the table.

Update (1030ET): China has weighed in again on the tensions between the US and Iran, and its position is clear: If violence breaks out, it’s solely the responsibility of the US.

Even without violating Iran’s airspace, the US drone must have flown very close to it. Trump administration abruptly changed Iran policy, leading to tensions in the Persian Gulf. If war breaks out there in the end, Washington will be primarily responsible for it.

How Will Iran React to Trump’s U-Turn on Military Strike?

Update (0944ET): Citing sources familiar with the administration’s decision-making, Vox reports that the US military could go ahead with the strike on Friday.

“Two US officials and one person familiar with deliberations tell me that there are still plans for striking Iran on Friday night, but it’s possible that plan won’t be put into action.”