The San Andreas Fault is visible on California’s desert plains.

Back in July this year a magnitude 4.3 earthquake shook the eastern San Francisco Bay area.

Four minutes later, a magnitude 4.5 quake hit near Ridgecrest, which was rattled by a pair of massive temblors, including the most powerful shaker (a magnitude 7.1) to strike California in 20 years.

And, then, at 1:24 p.m., the Bay Area felt another rumble, this time a magnitude 3.2, again centered near Blackhawk, an unincorporated community east of Oakland. It was originally reported as a magnitude 3.5.

Does this mean “The Big One” is coming? Don’t panic, the U.S. Geographical Survey cautioned.

“This specific sequence of earthquakes – the ones in Ridgecrest and the ones in Blackhawk – are not indicative that ‘The Big One’ is coming,” said Rafael Abreu, a geophysicist with the USGS National Earthquake Information Center in Colorado.

There were no immediate reports of damage or injuries after any of Tuesday’s quakes.

Were the earthquakes connected?

According to the report in USA Today  the answer is NO.

The earthquakes near Blackhawk are a different set from the aftershocks following the 7.1 Ridgecrest event on July 5, Abreu said.

They also occurred near different fault lines. About 270 miles lies between the centers of the quakes in northern and southern California.

Ridgecrest: Earth is still rumbling, but worst should be over for California quakes

The Ridgecrest quake occurred near the Little Lake fault zone, according to USGS maps. Geophysicists recorded the Blackhawk quakes near the Greenville fault zone. Neither are connected and both have a slip rate of 1 to 5 mm a year.

By comparison, the San Andreas Fault, which serves as a tectonic boundary between the North American and Pacific plates, moves more than 5 mm per year. California has gone past the average time between large earthquakes along the San Andreas, leading some to say the area is overdue for a massive temblor.

Is California experiencing an unusual number of earthquakes?

This is all normal, according to the USGS.

“We’re having quakes exactly where, geographically speaking, we’d expect these quakes to happen,” Abreu said. “And we’re having the amount of earthquakes we’d expect to see.” 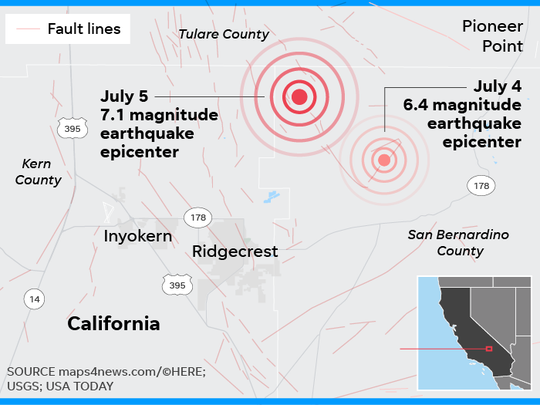 In terms of magnitude and number of quakes, Abreu said the Ridgecrest sequence has actually decayed faster than expected, but the variation isn’t unusual for the geological setting.

Four other quakes registering magnitude 3.5 or greater occurred in the Ridgecrest area Tuesday: one in the early morning, one in the afternoon, and two at night.

What are the aftershock predictions?

Northern California has a 4% chance of one or more earthquakes stronger than magnitude 4.3 over the next week, the USGS said. Smaller earthquakes are likely over the same time period, with up to five magnitude 3 or higher aftershocks predicted near Blackhawk.

‘I hope this is not the end’: Trona, California, was trying to bounce back. Then an earthquake hit. Then a bigger one.

To figure out what could realistically happen when the Big One finally strikes, a team of earthquake experts sat down sat down several years ago and created the ShakeOut scenario. Seismologists modeled how the ground would shake and then other experts, including engineers and social scientists, used that information to estimate the resulting damage and impacts. The detailed report examines the effects of a hypothetical 7.8 quake that strikes the Coachella Valley at 10 a.m. on November 13, 2008. In the following minutes, the earthquake waves travel across California, leveling older buildings, disrupting roads and severing electric, telephone and water lines.

But the quake is only the beginning.

Hundreds of fires start, and with roads blocked and the water system damaged, emergency personnel aren’t be able to put them all out. Smaller fires merge into larger ones, taking out whole sections of Los Angeles. The lines that bring water, electricity and gas to Los Angeles all cross the San Andreas fault—they break during the quake and won’t be fixed for months. Though most modern buildings survive the shaking, many are rendered structurally unusable. Aftershocks shake the state in the following days, continuing the destruction.

The scenario is actually somewhat of an underestimate, notes one scientist behind the ShakeOut, USGS seismologist Lucy Jones. The report’s team was surprised by the extent of the fire damage from the quake, Jones says, but it could be worse if the Santa Ana winds are blowing when the event happens. These seasonal winds blow dusty, dry air from inland toward the coast, increasing risks of wildfires. And while Los Angeles keeps a supply of water on its side of the San Andreas, the reservoirs have been drained by the current drought—if the quake struck today, water reserves wouldn’t last the maximum of six months that they would when full, she notes.

Overall, such a quake would cause some $200 billion in damage, 50,000 injuries and 2,000 deaths, the researchers estimated. But “it’s not so much about dying in the earthquake.

It’s about being miserable after the earthquake and people giving up on Southern California,” says Jones. Everything a city relies on to function—water, electricity, sewage systems, telecommunications, roads—would be damaged and possibly not repaired for more than a year. Without functioning infrastructure, the local economy could easily collapse, and people would abandon Los Angeles.

“Imagine America without Los Angeles,” Jones posits. While the fictional disaster in San Andreas could be an additional wake-up call for Californians, Jones worries that its unrealistic scenario could lead people to believe that there’s nothing to worry about or nothing they can do about it. Moviegoers may think that scientists will be able to give them fair warning of the Big One, even though earthquake prediction is currently an impossibility.

But Californians can prepare for what will come. Jones spent most of 2014 working with the LA mayor’s office to identify vulnerabilities and better prepare the city for the inevitable. The task force reported that building codes could be changed to require retrofitting of older structures so that they would withstand powerful shaking. The Los Angeles aqueduct could be fortified so that it won’t break when the San Andreas ruptures. Power, telecommunications and internet systems could be strengthened or have backup systems to ensure that people would be able to communicate. The plan would take billions of dollars and several decades to implement—and would have to overcome many obstacles—but it would improve the city’s ability to survive a quake catastrophe.

California is home to two of the world’s most prominent examples of Modern Christianity: Harvest International Ministry (HRock Church), based in Pasadena, and Bethel.

“California is not the only incubator of Pentecostal/Charismatic Christianity,” says Richard Flory, “but it is one of the most important. There’s less religious infrastructure that tells you what you can and can’t do here.”

In general, Flory says, Pentecostalism is associated with specific denominations like the Assemblies of God, while Charismatic tends to refer to a more independent form of Pentecostal Christianity that exists beyond traditional denominational bounds. But both emphasize miracles, prophecy and other gifts of the Spirit.

In the popular imagination California may not be a particularly religious place, but there are more than 200 megachurches here (churches with regular attendance of more than 2,000 people), more than in any other state. Pentecostalism itself was born here. “California has, for everybody, been a land of opportunity, not just liberal hippie types,” Flory says.