An editorial in the official Iranian Fars News today tacitly admits the goal of the Saudi attack this past weekend was to bring down Donald Trump’s 2020 Presidency.

The title of the piece:
The Iranian who Overthrew Carter Also Overthrows Trump
Here is a translated version of the editorial from Fars News:

Mike Pompeo, the US secretary of state, immediately accused Iran of seizing an attack on Saudi Arabia’s largest oil field, claiming that there was no evidence that the drones were fired from Yemen, Iranian soil had been fired. However, he did not provide any evidence for his allegations, and his remarks were still under investigation.

Also, Col. Turki al-Maliki, spokesman for the Saudi-led coalition, also accused Iran of involvement in the attack, saying preliminary investigations showed the weapons and explosives used in the attack were Iranian-made.

Of course, the Houthis, in response to al-Maliki’s statements, may say that the advanced weapons and equipment used by Saudi forces in their attacks on Yemen is also American-made, but where is the problem?

“The drones that attacked Saudi Arabian oil and gas refineries were Yemeni-made and were fired from Yemeni territory,” said Brigadier General Yahya Fast, Yemen’s military spokesman Ansarullah. The five UAVs were equipped with jet engines and were made with materials that Saudi Arabian radars could not detect and steered control systems in Yemen. “

“We do not lie and have the courage to speak the truth without any hesitation,” said John Fast. “We are planning to announce a major military operation in the future, in which we will control 2 kilometers of Saudi territory and our troops will capture thousands of Saudi troops…

…The attack on Saudi oil facilities, no matter who did it, represents the transition from traditional to cyber warfare or a combination of the two, and may be the precursor to further attacks on other Saudi infrastructure such as water and power stations at a later stage, and Certainly, Trump, who exacerbated the situation by withdrawing from the nuclear deal and imposing severe sanctions on Iran, is responsible for such attacks, and the Iranian who overthrew Jimmy Carter will overthrow Trump in the next election. God knows.

Editorial in Iran’s Fars News Agency (affiliated to the IRGC) says Saudi oil attack “may be followed” by strikes on its infrastructures inc water/power stations, adds: “Iran brought down Jimmy Carter & will bring down @realDonaldTrump in the 2020 election” https://www.farsnews.com/news/13980627000227/ … 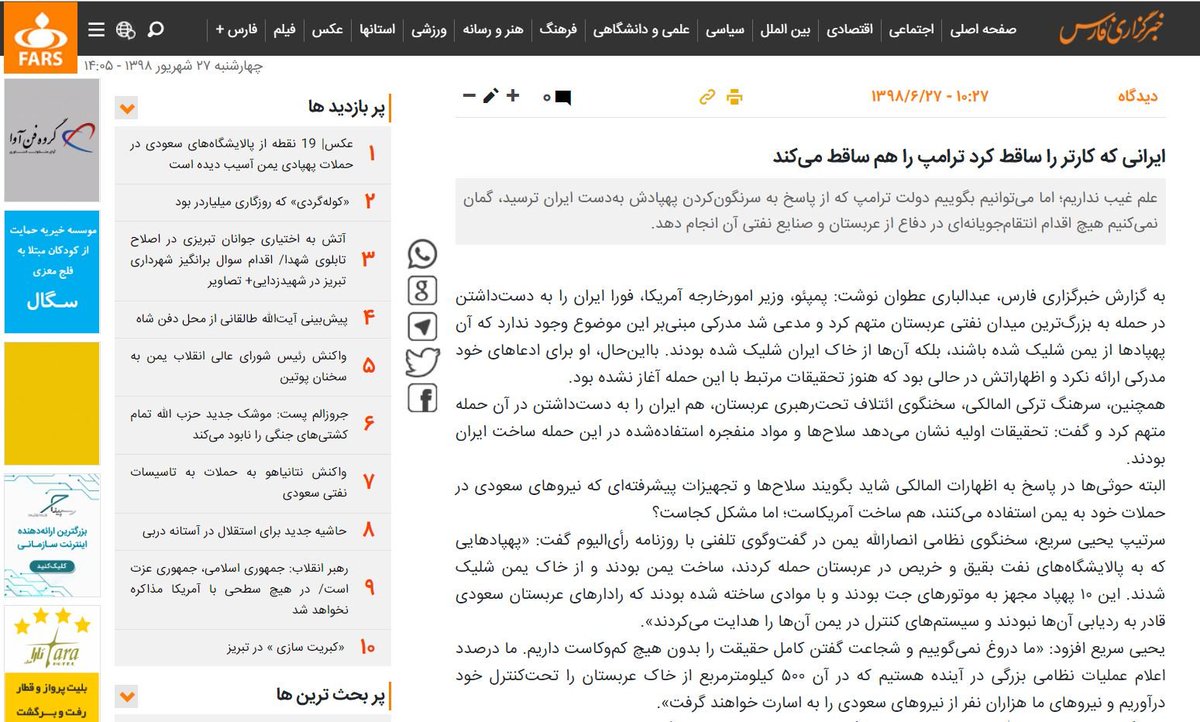