The highest total was recorded at a station east of Blackall, which received 50mm of rain.

Jess Gardner from the Bureau of Meteorology said there were also decent falls at Fairview, Quilpie and Blackall, which had not recorded any rain for months.

“There was widespread falls of a few millimetres and then underneath the storms we’re seeing some of those larger totals as well, which is great for those people who really need them,” she said.

Blackall Airport has recorded falls of 48mm since 9am after lighter showers overnight.

The system is expected to ease tomorrow and finish on Friday but there is a chance of another system coming through over the weekend.

“So we would see more rainfall over the weekend and into early next week. At this stage it is looking like that won’t be quiet as a significant system as this one but fingers crossed it will bring some more rainfall to those people that need it,” Ms Gardner said.

A severe storm warning may be issued around Longreach this afternoon.

“There is the chance of seeing some severe storms through today and tomorrow. The biggest hazard with those is going to be heavy rainfall so there is a chance of seeing a warning come out this afternoon,” she said.

She said due to the moisture she is not concerned about dry lightning.

“We’re hoping this will be a benefit for the areas that are fire-affected rather than making them worse,” said Ms Gardner.

‘This will replenish our water supply’

Blackall-Tambo Mayor Andrew Martin described the weather as “extraordinarily beautiful” and “worth waiting for”.

“A couple of good storms can set us right up, right through the Christmas period coming into the expected wet season you know, get us through two, three or four months if you can get enough rain.

“I’m a great believer in yellow-tailed cockatoos and I saw I great big flock of them out at the wool scour in Blackall just the other day, there might have been 12 or 13 of them.

“I nearly fainted. I got so excited, they’re a really good sign”.

“It just blew in as a storm — thunder and lightning — which we haven’t had here for a long time.

“[It] caused all the streets and gutters to fill and certainly people are happy about it — just to see the rain,” he said.

“For a lot of the region it has been many, many months since they have seen anything decent.” 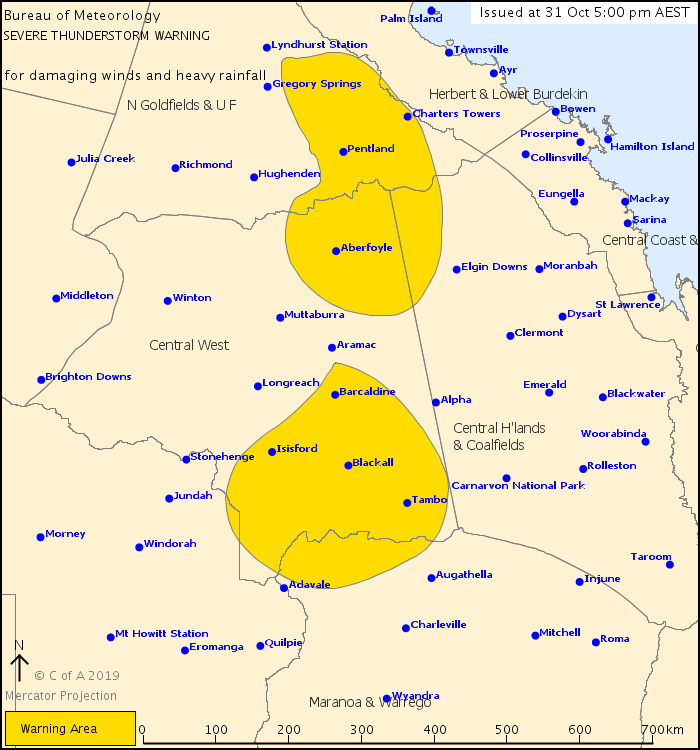 VIDEO: The first fall in the small town of Ilfracombe since 3mm was measured in March. (ABC News)

Longreach grazier Jenny Gordon said she was “chuffed” by the start of the wet season.

“It’s not everywhere but just in patches you’ll just see green shoots, so this 18mm is just going to be a bonus for us,” she said.

“We’re not in November yet, so fingers crossed this is the start of what’s going to be a more positive season.”

“We picked up 78mm … a bit of drizzle through the day yesterday and yesterday evening — then about one o’clock the storm kicked in and it’s been rattling around until about 6am this morning. We’ve done extremely well out of it,” he said.

“Since about March, early April maybe there hasn’t been hardly any rain at all since then so the place was starting to dry out and get a bit dusty, so this will replenish our water supply a little bit and certainly clean everything up.

“Nearby has still got a bit of feed going, but this will certainly give that a bit of a kick along and certainly should improve things, I just hope that it’s spread out and that it’s not just in this little isolated area.”

Space to play or pause, M to mute, left and right arrows to seek, up and down arrows for volume.

VIDEO: Rain started just before midnight in the drought-affected town of Longreach in Queensland. (ABC News)

Several people took to Facebook to celebrate the downpour.

“What the heck is this stuff falling from the sky?” Blackall resident Wayne Smith wrote.

Avril Fazel said the rain at her property, south of Blackall, brought hope for the change of season.

“It’s not the smell, it’s not the sounds, it’s not the cooling effect — it is all of this, but mostly how intangible and esoteric the falling of rain is to the soul during a drought,” she wrote.

Chrissie Bunter at Ilfracrombe said her property measured 5mm of rain — the first fall since receiving 3mm on March 29.

“There is a chance of seeing some severe storms as well — we could even see some stronger winds and hail as well this afternoon,” she said.

“Hopefully this is a sign of things to come for the next few months, but it is definitely a very welcome change to the long spell of dry weather that we’ve had.