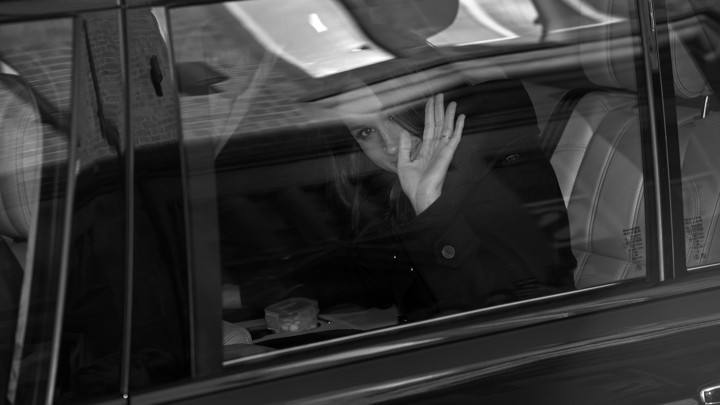 Prince Harry and Meghan, the Duke and Duchess of Sussex, who have announced that they are stepping back as senior members of the royal family, taking on fewer duties while continuing to “fully support” the Queen. The pair will split their time between Britain and North America in order to pursue more “cause-driven activities” and take greater control over their public engagements.

Johnson, who once described his policy on cake as “pro–having it and pro–eating it,” appears to have fellow cakeists in the Sussexs. It doesn’t take a royal kremlinologist to work out that you can’t step back from your duties and fully support the person in charge of doling out those duties, or retain the privileges of a constitutionally apolitical institution and promote causes that stray into politics.

It’s rather like me suggesting to my editor that I intend to step back from my daily duties as a journalist, while insisting I remained fully supportive of his vision to publish stories and to pay me anyway. Perhaps I should try?

Harry and Meghan are easy to sympathize with. Who isn’t in favor of having cake and eating it, too? In politics, after all, everyone is a cakeist: No one wants to pay more tax, but everyone wants better services. Conservatives espouse self-sufficiency and a small state—but not for their voters, who rather like universal benefits. Young liberals, meanwhile, beat their chests for redistribution—as long as it flows in their direction.

But just because everyone is a hypocrite doesn’t make hypocrisy a virtue. And like many vices, hypocrisy is often expensive, which means lots of people can’t afford it. Most, for instance, don’t have the money to fly on a private jet; therefore they’re unlikely to become a climate-change activist and a frequent luxury flier (as Harry and Meghan stand accused of). This, in essence, was Ricky Gervais’s point at the Golden Globes about hypocrisy in Hollywood. From here in London, Gervais’s monologue had a particularly British edge to it. Is any other country on Earth so obsessed with hypocrisy?

Perhaps we Brits are because we know it so well: We make our money in part by accepting cash and investments from countries we regard as rogue or nasty; we profess pride in gentle manners and temperament but have been among the most violent nations in Europe; and, of course, we got rich through plunder. Which gets us back to Harry and Meghan. What is it that they’re asking for? They have, they tell us, “chosen to make a transition,” which will see them “carve out a progressive new role” within the “institution.” Remember, that institution is monarchy: the system of inheriting authority as well as a whole range of other titles, wealth, land, and property. Harry is a duke and Meghan a duchess—not your classic progressive positions.

This, then, is perhaps the most problematic part of their plan. They want to remain in the royal family, retain the titles of the English aristocracy and the houses renovated with public funds, but step back from the duties that come attached to these privileges. Harry would not have got very far in the military asking whether he could stay but step back from his duty to serve. (Except, and this is a deeper problem, perhaps he could.)

To be fair to them, Harry and Meghan have seen the potential problem with their plan and declared their intention to “become financially independent.” But can they do this without trading off the institution they hope to step back from?

Their opening move in this direction doesn’t suggest so.

As my colleague Helen Lewis points out, the domain name of their new website is SussexRoyal.com.

Another problem the pair appear not to understand is their desire to be progressive—but seemingly without the controversy and criticism that comes from taking a stance on issues of public debate.

At heart, it’s unclear whether Harry and Meghan realize being progressive is not an apolitical act. Climate change is not apolitical. Even mental health is not apolitical. These issues, which the couple have voiced their opinion on, come with real, important, and political questions attached. On climate, it’s one thing to say it’s important, another to say what should be done about it. Who should bear the costs of tackling it, for instance? Mental health also comes with big, unanswered, and deeply political questions: Who should pay for treatment? Should it receive parity of funding with physical health? None of these questions have universally agreed-on answers—they are political

In Britain, royalty and politics are not supposed to mix. The monarchy has a defined constitutional role as the “dignified” branch, symbolizing the state through ceremony and duty; the government as the “efficient” branch, running the country by passing laws through Parliament, which is elected. The two cannot mix. One is apolitical and unifying, the other political and inherently divisive.

The royal family’s website puts it succinctly: “As Head of State The Queen has to remain strictly neutral with respect to political matters.”Harry and Meghan’s popularity is, in part, tied to this unifying neutrality. Choosing to intervene politically might give them a quick hit of satisfaction but erodes the basis of their popularity. Once they start to behave like ordinary people, giving ordinary opinions, then people will treat them as ordinary. Certainly, anyone can understand Harry and Meghan’s desire to be independent, to say what they believe, to give themselves something to do and stand for. But ask any politician: That is not cost free.

What complicates the cakeist charge against the pair is that Harry did not get a choice in this.

He is not alone in the world being born into wealth, but he had no choice in the role assigned to him. Harry, like anybody else, can want privacy, hate criticism of his wife, try to protect his child, mourn his mother, and loathe the people who chased her through the streets of Paris and took pictures of her as she lay dying. He can love his country, his family, and even the institution he wants to step back from at the same time that he longs for the freedom he has tasted in North America alongside his wife. He can strongly want to keep it all—and, perhaps, more than most, he might be able to.

But he can’t escape the cost of his choices entirely. He and his wife will be pilloried for their decision, for their hypocrisy or greed, sanctimony or privilege, depending on who is dishing out the criticism. Some of the commentary will be unfair and hurtful, even sexist and racist—as indeed it has been. Some will be out of bounds, defamatory, and a breach of their privacy. But some will be fair, and the life they have chosen means they are potentially more open to legitimate critique than before.

“You say you’re woke, but the companies you work for [in China are] unbelievable,” said Gervais on Sunday night, tearing into the cream of Hollywood. He was right to say Hollywood is pro–having cake and pro–eating it.

But so too, it seems, are Harry and Meghan.

5 thoughts on “The Hypocrisy of Harry and Meghan’s Decision”