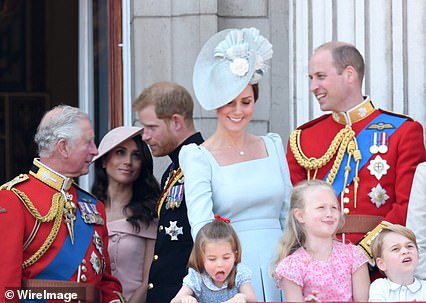 Prince Charles is ‘hurt’ by Harry and Meghan‘s decision to quit as senior royals because he has secretly given them millions to fund their lavish lifestyle and furnish their Windsor home in a show of ‘love’ for the couple since they married 20 months ago, it was claimed today.

Harry’s father has reportedly tapped into private income from his £1.2billion Duchy of Cornwall estate to support the Sussexes because he was desperate to keep them happy in the UK and particularly to support Meghan after she moved to Britain from Toronto.

A source told the Evening Standard: ‘There is a great deal of hurt given that the Prince of Wales has gone out of his way to help his son who he loves dearly and embrace his daughter-in-law into the family’.

Harry and Meghan already claimed £2.4million of taxpayers’ money to carry out building works on the grace-and favour property given to them as a gift by the Queen.

The insider said: ‘The figures quoted on the Sussex website are wrong. It does not take into account security for one thing and much of the travel. Also talk of what the Prince of Wales only pays towards both his sons from the profits of the Duchy is simply not true. He has paid out considerable sums from his private investments and money too. These are not small sums. It should not be a surprise that he is upset by all this given the truth about how he has supported his son.’

Another insider added: ‘On top of that he paid out a small fortune for their wedding’.