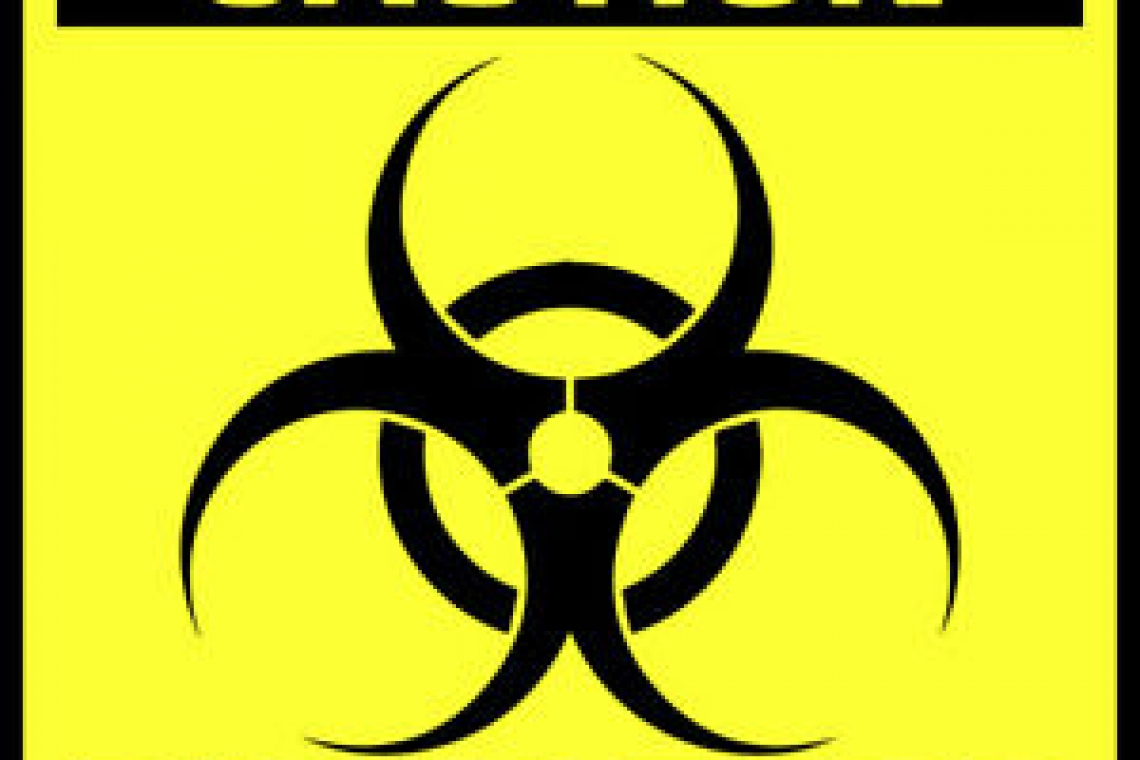 The “novel Coronavirus” outbreak affecting China and many other countries right now, has been determined to be a military BIO-WEAPON, which was being worked on at the Wuhan Virology Laboratory by China’s People’s Liberation Army, Nanjiang Command.

Somehow, it got out.  The world is now facing a massive wipe-out of humanity as a result.

The proof that this virus is a genetically-modified Bat-SARS-Like Virus, manipulated by the Chinese Army, appears below.  The evidence is irrefutable.

Two separate components of genetic sequencing from HIV-1,  the virus which causes AIDS, were added to Bat-SARS-Like coronavirus in the laboratory, thereby allowing it to infect human lungs via the ACES2 receptors in our lungs, and to disrupt the human body ability to fight it off, by reducing human leukocytes.

Make no mistake: this disease is, in fact, a MILITARY biological weapon.   The disease sequence from the original Bat coronavirus was uploaded to the National Center for Biotechnology Information at the US National Library of Medicine, in the year 2018 by China’s Institute of Military Medicine, Nanjing Command.  The image below from the National Center for Biotechnology Information proves the upload 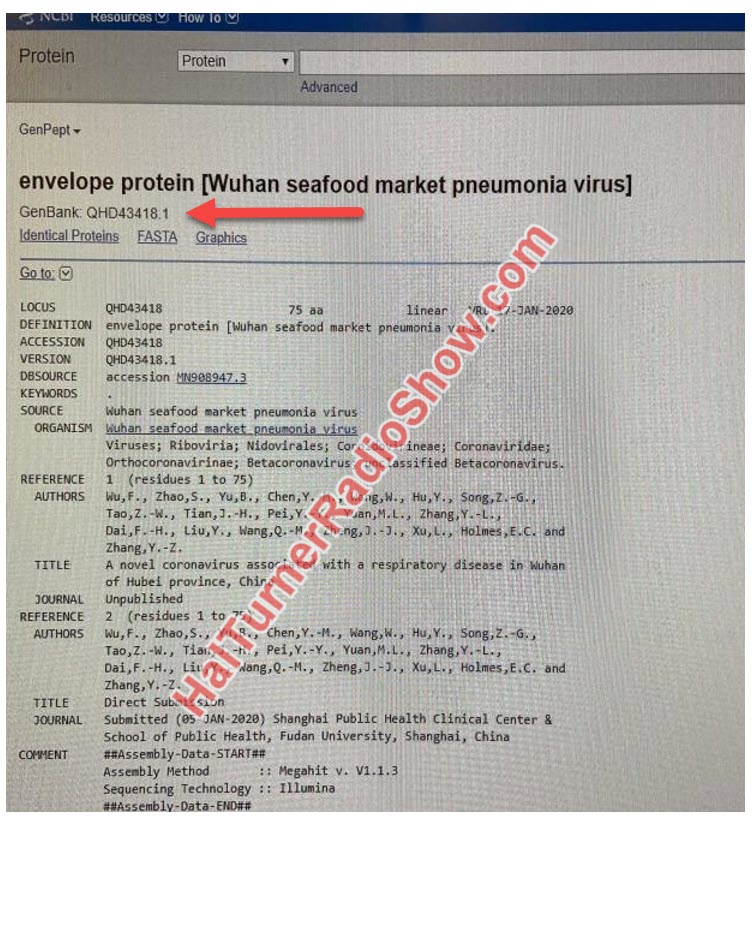 That Bat-SARS-Like coronavirus was issued Reference ID: AVP 70833.1 by the National Center for Biotechnology Information at the U.S. Library of Medicine.

The present outbreak of “novel Coronavirus” was uploaded to that same National Center for Biotechnology Information in January of this year by the Shanghai Public Heath Clinical Center and was issued Reference ID: QHD3418.1.  Here is proof of THAT upload

Using the test facilities known as BLAST (Basic Local Alignment Search Tool) from the U.S. National Library of Medicine researchers have determined that the “virus envelope” of those two separate diseases, are 100% identical!   Here is the BLAST Test result (Click image to enlarge):

MORE:  a new study shows that elements of HIV have been found in the new “novel coronavirus!”

We are currently witnessing a major epidemic caused by the 2019 novel coronavirus (2019- nCoV). The evolution of 2019-nCoV remains elusive. We found 4 insertions in the spike glycoprotein (S) which are unique to the 2019-nCoV and are not present in other coronaviruses.Importantly, amino acid residues in all the 4 inserts have identity or similarity to those in the HIV-1 gp120 or HIV-1 Gag. Interestingly, despite the inserts being discontinuous on the primary amino acid sequence, 3D-modelling of the 2019-nCoV suggests that they converge to constitute the receptor binding site. The finding of 4 unique inserts in the 2019-nCoV, all of which have identity /similarity to amino acid residues in key structural proteins of HIV-1 is unlikely to be fortuitous in nature.

There is no way in nature that the Bat coronavirus could fortuitously acquire the HIV genetic sequences, without causing a mutation of the Virus Envelope.

The ONLY way the virus envelope could obtain the HIV genetics and still remain 100% identical to the 2018 sample, is if the HIV genes were added in a laboratory.

So what the human race is now facing, is an accidentally-released military bio-weapon.  The original Bat-SARS-Like Coronavirus was identified by China’s People’s Liberation Army, through the Institute of Military Medicine, Nanjiang Command in the year 2018.  They uploaded the virus sequence and they were the sole entity in possession of the virus.

Here we are, two years later, and the virus they had has been changed in a way that cannot occur in nature without mutating the virus envelope protein.

This isn’t rocket science; this is as plain as day.  China conducted genetic manipulation of their Bat-SARS-like virus and created a new virus capable of infecting humans.  That new virus was apparently accidentally-released and is the “novel coronavirus” the world is now battling.

I am sorry to have to report, many of us are very likely to LOSE this battle.  Just like many are already losing their battle inside China and elsewhere.

Within the first month of this outbreak in China, the government there effectively QUARANTINED more than fifty-six MILLION people (56,000,000) in nineteen (19) major cities, even though China reported publicly that only a few hundred were infected and only about 25 had died by that time.

Why would China lockdown 19 cities and effectively Quarantine 56 Million people for such a trivial disease?   Because China KNEW it wasn’t trivial.  China KNEW it was a military bio-weapon which had accidentally gotten out.  And China also KNEW how far this would spread and how fast.  China is guilty as sin.

Here are the now-established FACTS about this disease:

This disease has an eighty-three percent (83%) infection rate.  That means if 100 people are EXPOSED to this virus, 83 WILL get sick from it.

The Disease can spread by AIR.  It is HIGHLY, HIGHLY contagious.

When a person breathes, virus comes out with those breaths.  Same thing when a person sneezes or coughs. Same when urinating or having a bowel movement.

ALL OF IT HAS VIRUS IN IT.

The virus can live OUTSIDE a person, in the air or on a surface, for a minimum of five days, and a maximum of twenty eight days.

So if an infected person goes into a store or supermarket, or public bathroom, or a school, office, warehouse . . . . or anywhere . . . . touches products on shelves and puts anything back, or sneezes or coughs, his virus gets on the products in that store or supermarket, bathroom, school, office, warehouse, etc., and can survive.

YOU walk-in a couple minutes, hours or even DAYS later, and pick up the same item, or even smell their stink in the bathroom – POW, you’re infected.

WORSE: This virus can infect others through the eyes and ears.

Let’s say you’re walking inside somewhere and an infected person was there minutes earlier and coughed or sneezed.   The cough or sneeze threw microscopic droplets into the air, which float for awhile.  A few minutes later, you walk through that air.  One or more of the microscopic droplets gets on your eye.  You don’t even KNOW it because the things are so small.

You blink.  We all blink.

Your eye lid pushes the virus off the surface of your eye, down into the bottom eye area, and the virus washes down into your tear duct.  POW- you’re infected.

It cannot be overstated that this virus is the worst public disease crisis the world has faced in over 100 years.  Not since the Spanish Flu of 1918 has the world faced such death and this is already heading toward being far WORSE than the Spanish Flu.

The Spanish Flu spread worldwide during 1918-1919.  In the United States, it was first identified in military personnel in spring 1918. It is estimated that about 500 million people or one-third of the world’s population became infected with this virus. The number of deaths was estimated to be at least 50 million worldwide with about 675,000 occurring in the United States.

When a disease outbreak occurs, one of the measurements that scientists use to see how badly the disease will spread is known as R0.

The 1918-1919 pandemic-causing Spanish flu is estimated to have had an R0 ranging from 1.4 – 2.8, with a mean of 2.  This means that for every person infected, that person could be expected to infect another 1.4 to 2.8 additional people.

According to TrendingEconomics, Hospital beds (per 1,000 people) in United States was reported at 2.9 in 2013, according to the World Bank collection of development indicators, compiled from officially recognized sources. Hospital beds include inpatient beds available in public, private, general, and specialized hospitals and rehabilitation centers. (Here)

Using the Infection Rate of 83% listed above, out of 1,000 people exposed to this Bio-Weapon, 830 will become infected.

What happens to the rest?   They cannot get hospital care.

Right now, when a person cannot get hospital care for this disease, the death rate for such people is 65-70%.

That means me and you.  Dead.

IT CAN (AND PROBABLY WILL) HAPPEN HERE

Many of the 56 Million people in 19 Quarantined cities have not eaten in days because there is no food remaining in the cities.  This is causing rioting.

6 thoughts on “PROOF: “Coronavirus” Infecting the World is a MILITARY BIO-WEAPON Developed by China’s Army”