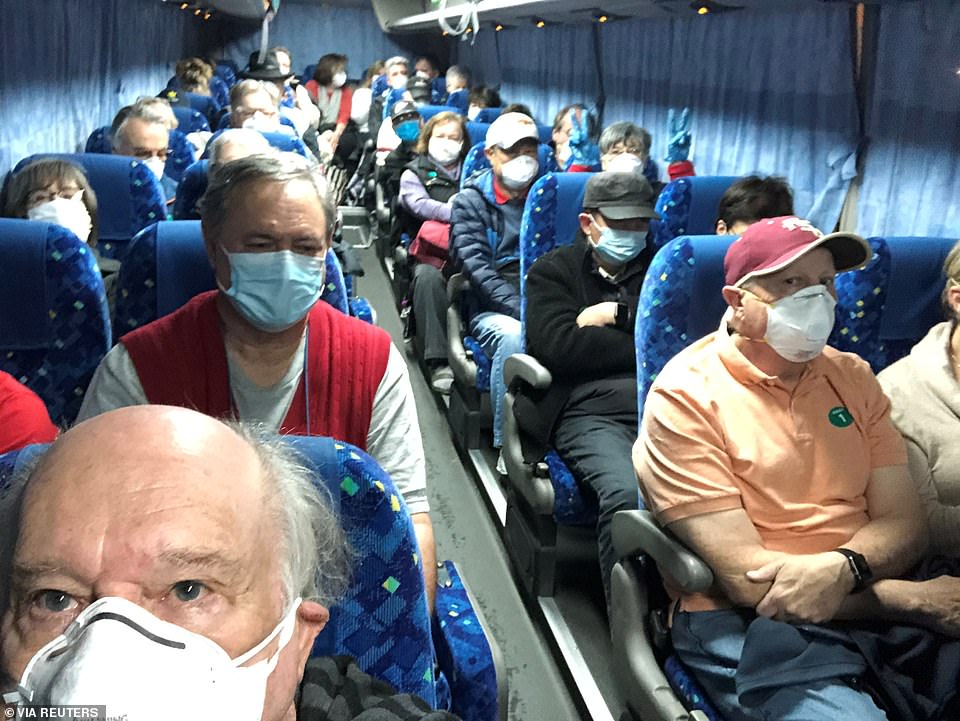 They Escaped an Infected Ship, but the Flight Home Was No Haven

The U.S. had said cruise ship passengers infected with the coronavirus would not be allowed on evacuation flights, but the decision was apparently reversed at the last minute.

As we first reported on Monday, shortly after the US decided to break the quarantine surrounding the Diamond Princess cruise ship which had emerged as the single-biggest locus of coronavirus cases outside of China, hundreds of weary, homesick Americans were on their way home.

And as more than a dozen buses sat on the tarmac at Tokyo’s Haneda Airport with 328 Americans wearing surgical masks and gloves inside, awaiting anxiously to fly home after weeks in quarantine aboard the Diamond Princess, U.S. officials wrestled with troubling news: new test results showed that 14 passengers were infected with the virus.

The problem: the U.S. State Department had promised that no one with the infection would be allowed to board the planes.

A decision had to be made. Let them all fly? Or leave them behind in Japanese hospitals?

At this point, according to the Washington Post, a fierce debate broke out in Washington, where it was still Sunday afternoon: The State Department and a top Trump administration health official wanted to forge ahead. The infected passengers had no symptoms and could be segregated on the plane in a plastic-lined enclosure (something we mocked on Monday when we said “we can only hope that “plastic divider” was enough to keep the virus confined to its own class aboard the aircraft.”).

At this point, officials at the Centers for Disease Control and Prevention disagreed, contending they could still spread the virus. The CDC believed the 14 should not be flown back with uninfected passengers.

“It was like the worst nightmare,” said a senior U.S. official involved in the decision, speaking on the condition of anonymity to describe private conversations. “Quite frankly, the alternative could have been pulling grandma out in the pouring rain, and that would have been bad, too.”

In the end, the State Department won the argument. But unhappy CDC officials demanded to be left out of the news release that explained that infected people were being flown back to the United States — a move that would nearly double the number of known coronavirus cases in this country.

In retrospect, the CDC will soon be proven correct in its dire warning that repatriating a full plane of both infected and healthy individuals could be a catastrophic error, because it now appears that not only can the virus remain latent for as long as 42 days, 4 weeks longer than traditionally assumed, resulting in numerous false negative cases as infected carrier slip across borders undetected, but far more ominously, it now appears that the diseases can re-infect recently “cured” patients, because as Taiwan News reports, the following

A Chinese patient who just recovered from the Wuhan coronavirus (COVID-19) has been infected for the second time in the province of Sichuan, according to local health officials.

On Wednesday (Feb. 19), the People’s Daily reported that a man in Sichuan’s capital Chengdu had tested positive for the virus during a regular check-up just ten days after being discharged from the hospital. The report said he had previously been cleared of the virus by medical staff.

The Sichuan Health Commission confirmed the news on Friday (Feb. 21) and issued a community warning announcement in the patient’s neighborhood.

The announcement said that the man and his family had been transported to a nearby health facility on Thursday morning (Feb. 20) and that health officials had sanitized the entire community, reported Liberty Times.

According to ETtoday, the patient and his family had been under home quarantine and had not left the house since Feb. 10. The authorities are still investigating the cause of the reinfection.

The news has stirred up heated reactions from Chinese netizens.

Some suspect that the hospital discharged the man before he was fully recovered, and many have expressed concern about the worsening epidemic.

Several doctors from Wuhan, the epicenter of COVID-19, said last week that it is possible for recovered patients to contract the virus a second time. They warned that a recurring infection could be even more damaging to a patient’s body and that the tests are susceptible to false negatives.

Needless to say, with the US now repatriating over a dozen coronavirus-infected individuals, it will be absolutely critical to keep a close eye on any deemed healthy or cured, because it now appears that not only can the virus stay latent for nearly a month longer than previously expected, but cured patients can also get reinfected.

And all of this is probably why, in a far more gloomier sounding press conference, today the CDC warned that:

In short, it’s only a matter of time before the pandemic, which is already “contained” in nearly 30 cases in the US as of this moment, becomes uncontained, and the exponential chart of cases away from China, includes the US in it.