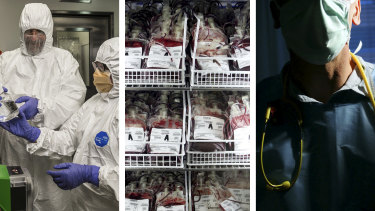 “The COVID-19 plan”, the blueprint outlines a strategy in the event of a large-scale coronavirus outbreak as world leaders and biosecurity experts warn a pandemic is almost inevitable.

The international fallout of coronavirus is sparking fears of a global economic slow down.

The document flags a “precautionary approach”, emergency pandemic legislation, and provisions for the Prime Minister to assume prime responsibility for efforts to contain the disease.

“The novel coronavirus outbreak represents a significant risk to Australia,” the document reads. “It has the potential to cause high levels of morbidity and mortality and to disrupt our community socially and economically.”

The plan lists three possible best-to-worst case scenarios the healthcare system could face depending on the severity of the disease and how quickly it spreads.

If the severity is ‘low’, the impact would be similar to a the 2009 H1N1 pandemic or a bad flu season, stretching hospital and primary care services.

A ‘moderate’ outbreak would put hospitals under “severe pressure”, health authorities would mobilise dedicated coronavirus clinics, elective surgeries and other non-urgent procedures could be “scaled back”, and new pandemic legislation could be enacted.

A ‘high’ severity outbreak – the most extreme scenario – assumes an outbreak would reach a magnitude not seen since the 1918 ‘Spanish Flu’, which infected one third of Australians, and killed between 50 million and 100 million globally.

GPs, pharmacies, nurses, aged care facilities, blood banks and diagnostic services would be stretched to capacity to prioritise essential hospital services, and “mortuary services will be under pressure”.

The government triggered the plan on January 21 when Australia became the first country to declare the COVID-19 a disease of pandemic potential, Health Minister Greg Hunt said on Tuesday.

“We are not immune but we are as well prepared as any country in the world,” he said.

“In Australia, there is no great risk at this point in time when it comes to human transmission,” he said.

Is it a pandemic?

While the World Health Organisation has already declared COVID-19 a global health emergency, whether or not it is a “pandemic” is another matter.

According to the WHO, a pandemic, colloquially, refers to “a new pathogen that spreads easily from person to person across the globe”.

But since the world’s last pandemic – swine flu in 2009 – the organisation has moved to a different “phasing system” to measure such outbreaks, meaning pandemic is no longer a designation triggering a formal response.

The WHO may use the word, spokesman Tarik Jasarevic says, but it has already put the world on alert in declaring an emergency last month.

As for whether the word “pandemic” fits the current coronavirus outbreak, WHO director-general Tedros Adhanom Ghebreyesus says the window to contain the virus has not yet closed though further investment from countries is still needed to stop it in its tracks.

The transmissibility of the virus is still not known. The government is working under the assumption that an infected person has the potential to infect 1.4 to 2.5 people, in line with the most recent advice.

Under the plan the Prime Minister “can assume primary responsibility” for leading efforts to quell an outbreak “should circumstances warrant it” and the Department of Health’s “National Incident Room” will be command central, coordinating staff, supplies and communication.

As the severity of the illness increases, so will the strain on intensive care units, paediatric hospitals, the limited number of specialist equipment – particularly extracorporeal membrane oxygenation (ECMO) for heart and lung failure – and services for “management of the deceased”.

NSW and Victorian hospitals are increasingly swamped by unprecedented numbers of seriously ill patients without the additional stress of an outbreak.

The government has the power to fast-track approvals if an effective vaccine is discovered, and mobilise a national immunisation plan.

Medical stockpiles have been taken out of storage and transported to state and territories ready for use, and the health system is bracing for the potential need to surge staff numbers.

Professor Raina MacIntyre, head of the Biosecurity Program at UNSW’s Kirby Institute said Australia could still manage the virus, but widespread transmission could result in 25 to 70 per cent of the population getting infected.

Professor Kanta Subbarao, Director of the WHO Collaborating Centre for Reference and Research on Influenza explains what we do and don’t know about the 2019 Novel Coronavirus.

Professor Nigel McMillan, director in Infectious Diseases and Immunology at Griffith University said if a pandemic reached Australia, authorities would need to prepare for a large influx of patients.

“[But] we don’t wish to induce panic food or petrol stockpiling … when for 95 per cent of the population, this will be a mild cold,” he said.

Senior researcher at the Marie Bashir Institute for Infectious Disease and Biosecurity Professor Lyn Gilbert said Australia’s stringent infection control measures may not stop the virus from entering Australia, but they would slow it down, giving the health system time to mobilise.

“Given no one in the population has encountered [this virus] before, everybody is pretty well susceptible, and could be a fairly big strain on the health system unless we are very well-prepared,” she said.