Almost 60 million people have been placed under an unprecedented lockdown in China’s Hubei province since the novel coronavirus broke through its capital city, Wuhan. A month on, here’s a look at what life in the usually bustling transport hub has been like.

It’s a city more populous than London or New York, and in recent months, it has rivalled the two metropoles for global attention — albeit for the wrong reasons.

This city is Wuhan — the Chinese provincial capital of Hubei — which has recently come to be known as the epicentre of an outbreak of a new coronavirus, known as COVID-19.

More than 2,000 people are believed to have died as a result of the strain, while more than 70,000 people are infected, according to World Health Organisation (WHO) data.

The bulk of fatalities have been in Hubei, with 2,029 people killed and more than 62,000 people infected so far.

It is predicted these numbers will rise.

EMBED: By February 17, infection rates appeared to spike, but the rise was due to the WHO counting clinically-reported cases of COVID-19.

The outbreak has prompted unprecedented virus control measures, which have plunged Wuhan and Hubei into lockdown for the past month.

In all, some 58 million people have been placed under unprecedented restrictions, with public transport, shops, supermarkets and flights all suspended.

For those who have remained in the province, some describe a world akin to a horror film, where the buzzing of food delivery bikes and local birdlife are the few remaining audible parts of once-bustling Chinese megacities.

Here’s what the experience is like for some people located in Wuhan.

Space to play or pause, M to mute, left and right arrows to seek, up and down arrows for volume.

VIDEO: Medical staff in Wuhan and surrounds have said health infrastructure is failing to accommodate the influx of new patients.(ABC News)

Despite Wuhan’s unprecedented quiet, all is not serene in Hubei’s capital.

Weeks after news of the outbreak hit, screens around the world were awash with vision of Chinese construction workers rapidly putting up new and makeshift hospitals to accommodate the raft of COVID-19 cases.

PHOTO: Hubei province has recorded the most infections and deaths as a result of COVID-19.(Supplied: Johns Hopkins University)

The outbreak has placed an unrelenting strain on the region’s existing health infrastructure,which has also seen health professionals infected with the disease.

The ABC understands that doctors and nurses in Wuhan have all signed confidentiality agreements with health officials, which are designed to prevent them from speaking out about local working conditions.

The repercussion of breaching these obligations risks a jail term.

But one nurse, who spoke to ABC Chinese on the condition of anonymity, said conditions at her hospital in Wuhan were at breaking point.

“We aren’t given any essential medical goods and materials … starting from the moment the city was under the lockdown, [people] are angrier, despite the sense of gratitude,” the nurse said.

Many colleagues in our department have been isolated. Many of them belong to the hospital executive team who are critically ill. Colleagues at work feel very emotional and cry every day. 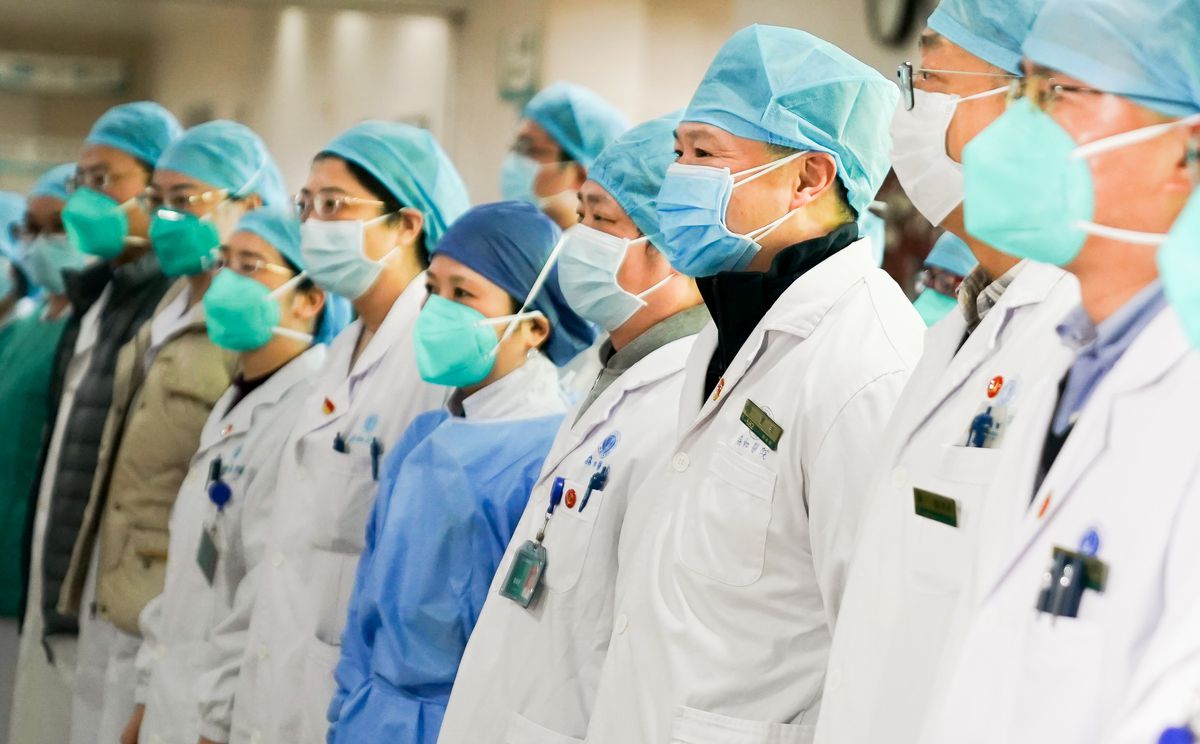 The nurse added that a number of nurses and cleaners had fled the hospital since the outbreak began, adding that they had been considering doing the same.

I either want to desert the battlefield at this time of crisis … or be the hero.

However, the ABC has not been able to independently verify the nurse’s claims.

‘They believe that staying indoors is a contribution to the motherland’

For some, China has been praised for its unprecedented efforts in enforcing a lockdown the scale of which the world has never seen before.

Matthew Kavanagh, a researcher in global health, politics and law at Washington DC’s Georgetown University, said in medical journal The Lancet that the lockdown reflected a “level of control only available to authoritarian governments“.

However, he said that the very same structures that were able to pull off the lockdown were also its Achilles heel, as “authoritarian information politics inhibited a rapid response to the outbreak”.

Governments can be the victims of their own propaganda, because the country’s political institutions provide incentives to local officials to avoid sharing bad news with their central bosses and await instructions before acting,” Mr Kavanagh said.

Mr Kavanagh’s sentiment is one shared by Lu Xinhua, a Wuhan-based dissident who spent four years in a Chinese jail after being sentenced for subversion for establishing the Chinese Democratic Party in 1998.

“At first, the Government concealed the truth,” Mr Lu told ABC Chinese, adding it only sounded the alarm when information became “uncontrollable”.

The Chinese political system favours people who singing praises to the leadership, but nobody dares to point out the truth — the Government claims telling the truth could create fear and panic.

He claimed that Beijing’s relative success in enforcing the lockdown was because some of his compatriots were “often brainwashed and educated to cherish collectivism”.

“They believe that staying indoors during the epidemic period is a contribution one can make to the motherland,” Mr Lu said.

He added that being forced to stay at home reminded him of being back in prison, and didn’t blame other Chinese nationals for their acquiescence to Beijing’s lockdowns, as “they have little awareness of protecting their own rights”.

These measures are of course effective, but they can be taken more humanely, rather than being forceful.

‘Psychologically it is tough’

Melbourne racehorse trainer Rui Severino unknowingly stepped into the epicentre of the outbreak.

But he has chosento stay in Wuhan in order to be together with the horses and his horse training team.

Psychologically it is tough for me — you are in lockdown, can’t go anywhere,” Mr Severino said.

“[But] I have a big team here and a lot of responsibilities. I just couldn’t turn my back on them.”

He and his team are now locked in their racehorse training centre, continuing to train horses, while also staying faithful to lockdown controls, which includes conducting body temperature checks twice daily.

He said these measures weren’t draconian.

“I don’t believe [the lockdown] intrudes my human rights,” he said

Nobody forced nobody … It’s not like people with guns enter buildings and say, ‘you can’t get out’.

He said he thought the measures had worked, and that a lockdown of such a scale would not be possible anywhere else.

‘The price of the lockdown is huge’

PHOTO: Australian photographer Ke Mo (pictured) was supposed to be in Wuhan for a week.(Supplied: Ke Mo)

Ke Mo is an Australian photographer who has been stranded in Wuhan.

He was only supposed to be in the city for a week as he was there on an assignment to photograph Hubei’s Lunar New Year celebrations.

He has missed out on multiple Australian-chartered evacuation flights from the city, as priority has been given to the elderly, women and children — something he said he understood.

“I’m happy to let people in need of help leave first,” he said, adding that he estimated that about 100 Australians were left in Wuhan.

In the interim, the photographer has stayed in his hotel free of charge, after staff made the decision to put all guests in their dormitories.

As he has been photographing the lockdown, he told the ABC the efforts had been effective in preventing virus transmission, albeit at a “huge” price.

Mo said authorities revoked all passes allowing people to go outside on Saturday, February 15, which made getting food a complex task.

The meat I bought earlier has all gone. Now there are only eggs, vegetables and a little bit of fruit left and may last for only four or five days,” he said.

He added that groceries have been organised by groups of 10 households, where each household nominates someone to collect supplies.

However, as a foreign citizen who was supposed to be in Wuhan for a week, Mr Mo said he had begun borrowing money from friends and colleagues to keep himself afloat.

He said he was unsure when he would be able to travel back to Australia, and was building “psychological and emotional” resilience to prepare for more weeks spent under Wuhan’s lockdown.