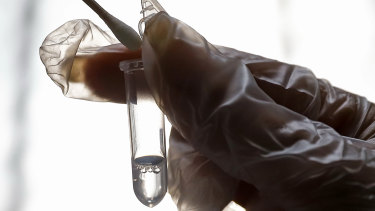 Two more people have tested positive for COVID-19 in NSW.CREDIT:AP

By Rachel Clun and Kate Aubusson

Multiple patients and staff at Ryde Hospital have been quarantined after coming into contact with a doctor diagnosed with COVID-19 as the number of cases in the state of New South Wales jumps to 13.

Hospital emergency departments across the state are bracing for a deluge of patients, with health authorities predicting coronavirus outbreaks will converge with an early and severe flu season.

People on the streets of Chatswood share their concerns about coronavirus.

Four more cases of coronavirus were diagnosed in NSW on Tuesday in what Health Minister Brad Hazzard described as “quite an escalation”.

Both were in Sydney: a 53-year-old doctor and the 41-year-old sister of a man who was diagnosed with COVID-19 after returning from Iran.

NSW Chief Health Officer Dr Kerry Chant said the doctor worked at Ryde Hospital and was in contact with a “diverse range of patients”. He is being treated in Westmead Hospital’s ICU.

All staff who were in close contact with the doctor have been quarantined in their homes. Additional healthcare workers were brought in overnight to ensure Ryde Hospital was fully staffed, Dr Chant said.

NSW Health is contacting patients who could have been treated by the doctor while he was infectious and asking them to self-isolate and be alert to symptoms.

Dr Chant said they were treating each patient on a “case-by-case basis” depending on how much time they had spent with the doctor, and were taking an “incredibly cautionary approach”.

She said they were still trying to work out how he contracted the virus. He either caught it from a patient or picked it up in the broader community, she said.

“He certainly interacted with no known coronavirus cases,” she said.

The case confirms the likelihood that there are undiagnosed cases of coronavirus in the community, given more than 80 per cent of people who catch the virus will develop only mild symptoms.

Professor Robert Booy, an infectious diseases expert at the University of Sydney, said it was clear Australia had community spread, “however you dice it”.

“The first gentle beginning is upon us and the onslaught is coming that we hope to delay for as long as possible,” he said.

The longer the delay, the more time the healthcare system has to prepare for the convergence of coronavirus and rising numbers of influenza patients, Professor Booy said.

The flu season is already shaping up to be severe, with the number of confirmed influenza cases in January and February even greater than last year’s unusually high number of summer flu cases.

In the first five weeks of 2020, there were 2490 confirmed cases of flu in NSW – 425 more cases than the same period in 2019 – though this may be partly due to a rise in testing linked to concerns over the coronavirus, NSW Health Influenza Surveillance Report says.

Emergency departments also recorded an increase in presentations over the same period.

The national COVID-19 total rose to 38 on Tuesday, with a 20-year-old University of Queensland student also diagnosed.

One man has died this week, and 21 people fully recovered from the disease.

On Tuesday evening, health authorities tasked with tracking down passengers on a Qatar Airways flight from Doha to Sydney received the contact details of passengers seated closest to a woman who may have been infectious during the flight.

The information had been delayed by almost 48 hours after the case was first reported because of handwriting illegibility on many of the passengers’ immigration cards, which contained their contact details, Dr Chant said.

Globally, the coronavirus has infected more than 90,000 people, and more than 3000 have died with the virus. (These figures are unverifiable.)

Note: — The main issue here is the importing of the virus from Overseas Hotspots. The individuals need to be quarantined at the border.