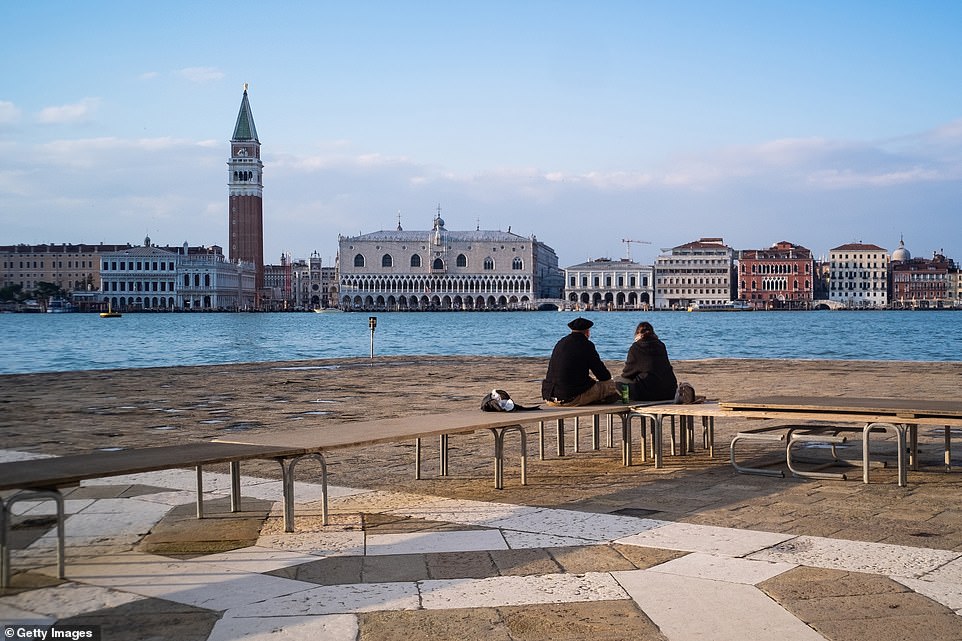 An empty St. Giorgio Maggiore island in Venice today. The Italian Government has taken unprecedented measures of a nationwide lockdown

Angela Merkel warns up to 58 MILLION Germans – 60-70% of the population – will be infected, as Spain sees infections triple in two days and Italy records 168 fatalities in ONE DAY

By CHRIS DYER FOR MAILONLINE and REUTERS

As many as ’60 to 70 per cent’ of Germans will be infected with the deadly coronavirus, Chancellor Angela Merkel warned today, as the contagion threatened to rip through Europe.

Addressing a parliamentary group meeting of her Christian Democratic Union party in Berlin today, Merkel said that 58 million Germans could contract the disease if it spiralled out of control, according to insiders who spoke to newspaper Bild.

But Health Minister Jens Spahn pointed out during the meeting that 80 per cent of all infected patients would have almost no symptoms.

The infection is now transmitting between humans in nearly 30 countries across Europe, the World Health Organization has warned today.

Fears of the life-threatening infection have now engulfed the continent, which has recorded more than 17,000 cases and over 700 deaths in Europe alone.

Europe’s crisis – centred in northern Italy but now rapidly spreading – began with a handful of imported cases from China, but has now seen tourist attractions and transport hubs deserted.

Italy went into a nationwide lockdown on Monday night and today recorded its highest single-day toll to date with 168 fatalities. This pushed the number of deaths outside Chinato more than 1,000.

WHO chiefs have now confirmed local transmission – when an infection spreads within a country – in 27 European nations.

Globally, more than 114,000 people have been infected and over 4,000 have died from the illness since the outbreak began in China in December. 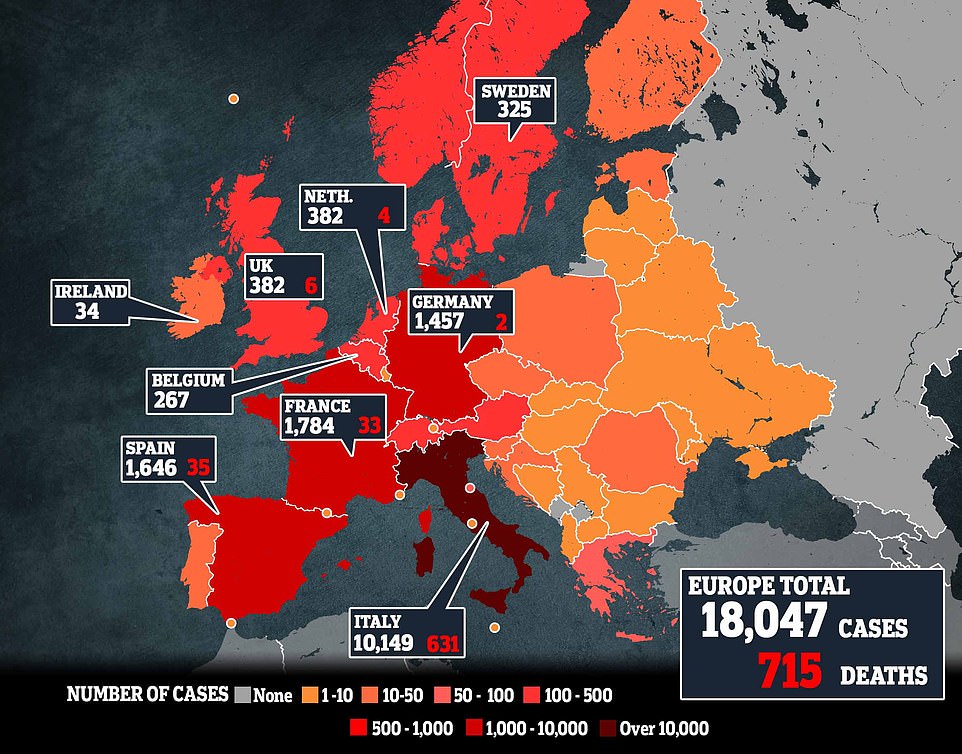 Spain’s virus cases surged to 1,622 infections and 35 deaths today and Italy recorded 168 fatalities as German Chancellor Angela Merkel warned up to 70 per cent of her citizens could be infected 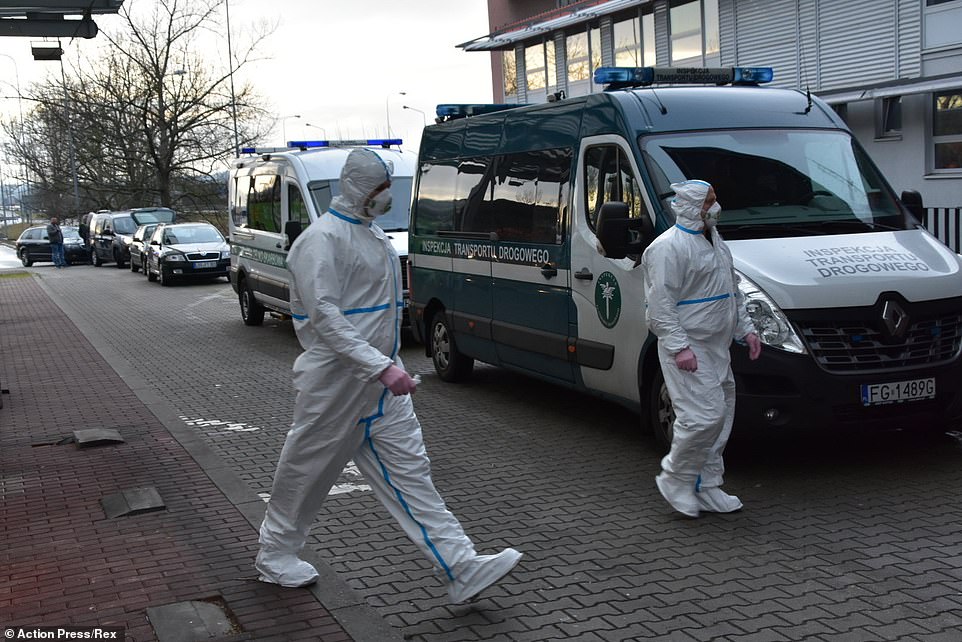 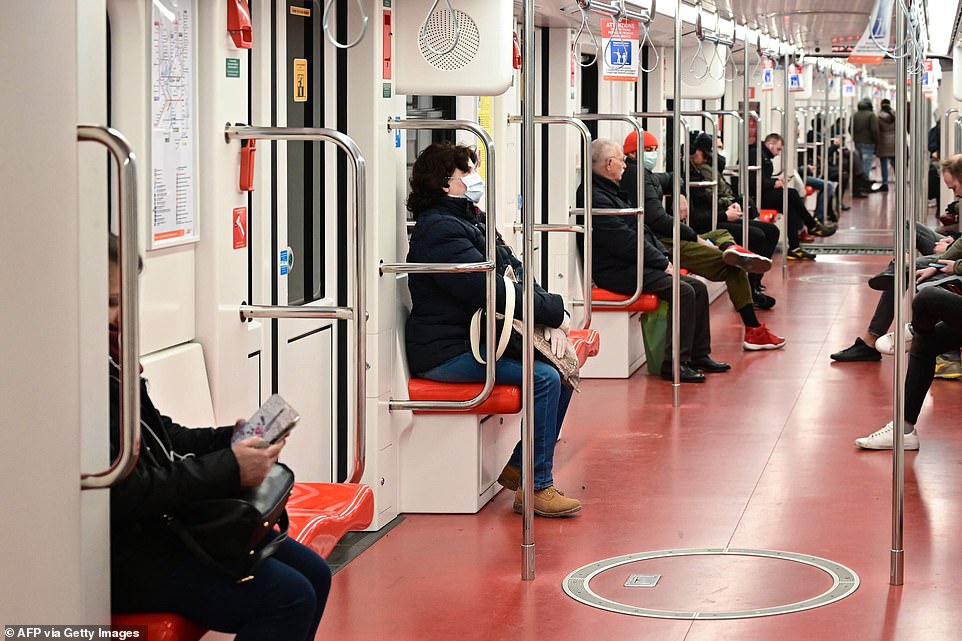 Commuters, some wearing respiratory masks, travelling in the underground metro in downtown Milan while sat the recommended 3ft distance from each other 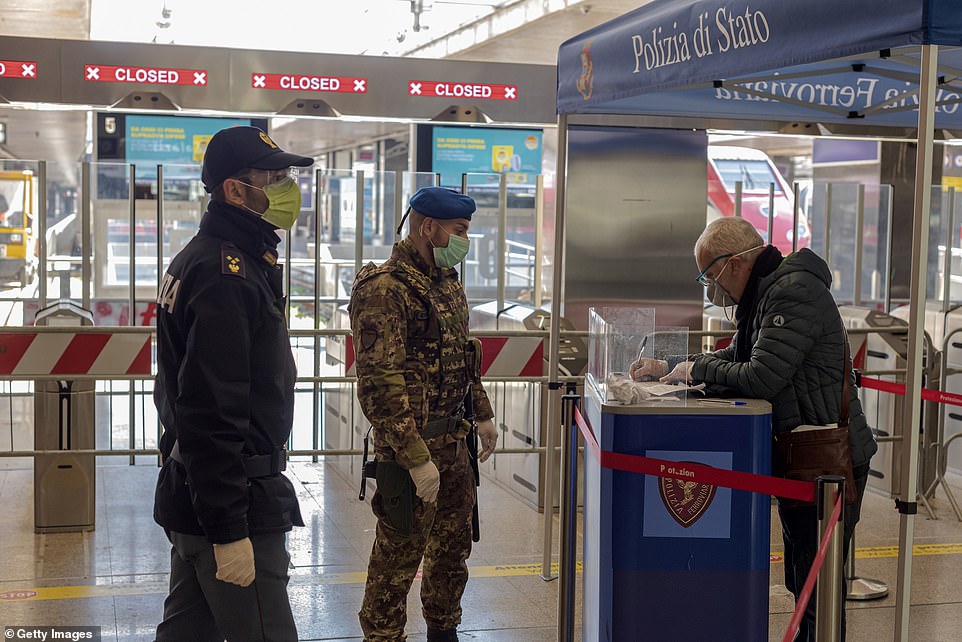 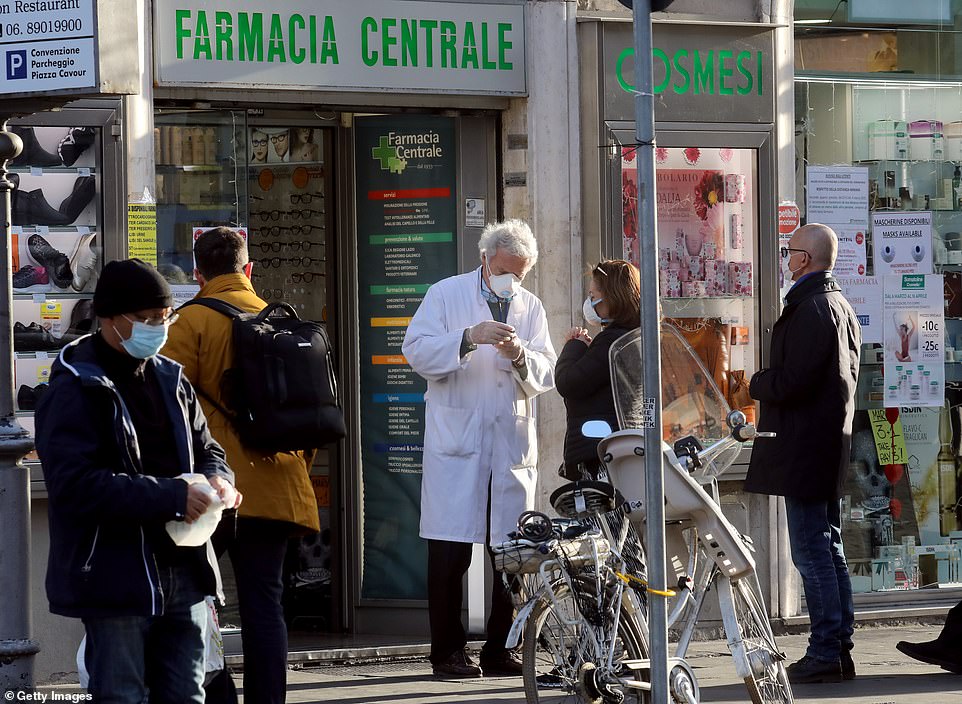 People queuing at a pharmacy to buy face masks in Rome today. The Italian government imposed unprecedented national restrictions on its 60 million people to control the spread of the coronavirus 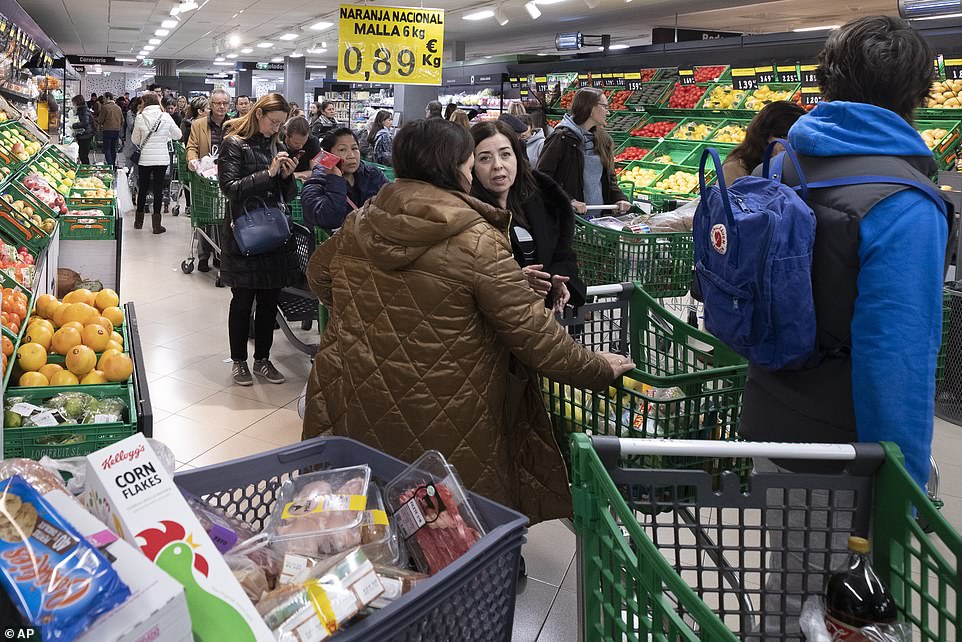 France recorded a 70 per cent rise in cases over Monday night, with more than 1,200 patients now known to have caught the deadly infection.

The country’s health ministry gave chemists the green light to produce their own hydro-alcoholic hand sanitizer gels following a shortage.

Germany and Spain also saw huge spikes in the number of infected patients, while the UK’s toll has risen eight-fold in the space of a week.

Albania today became the latest nation to be struck down, meaning only a handful of countries across the continent have yet to record a case.

Europe’s escalating coronavirus crisis comes just weeks before thousands of British families will travel to the continent for Easter.

In other developments, a maintenance worker at Disneyland Paris tested positive for coronavirus, the theme park announced today.

EU chief Ursula von der Leyen today pledged to mobilise ‘all the tools’ available to the bloc to lessen the economic impact of the coronavirus epidemic, which has roiled markets across the globe.

After EU leaders held crisis talks by video conference to try to coordinate their response to the epidemic, Von der Leyen sought to reassure businesses and governments spooked by the spread of the disease.

Among the measures is a coronavirus response investment fund backed by 7.5 billion euros ($8.5 billion) in EU funding – subject to approval by member states and the European Parliament. 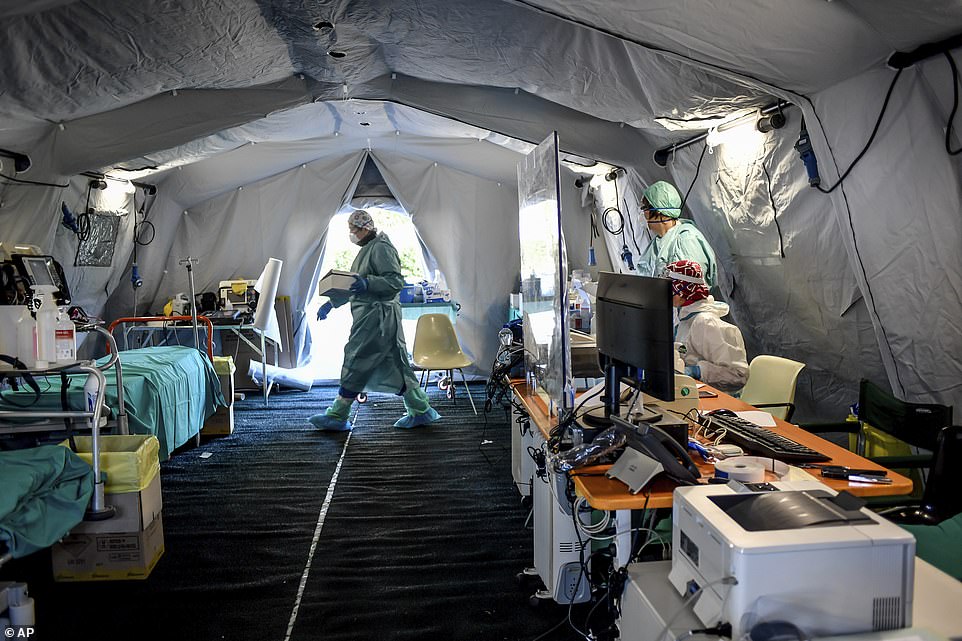 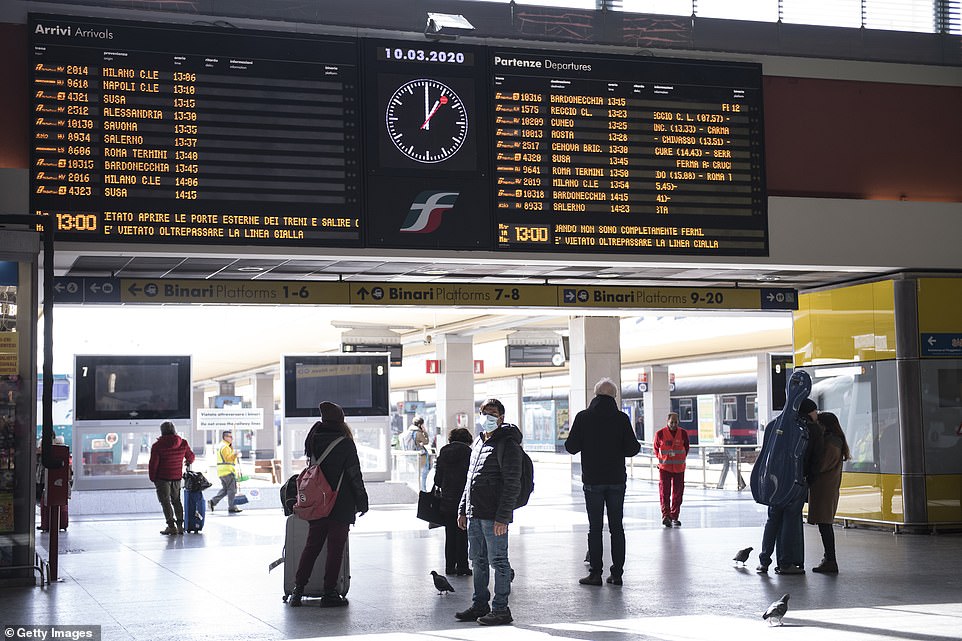 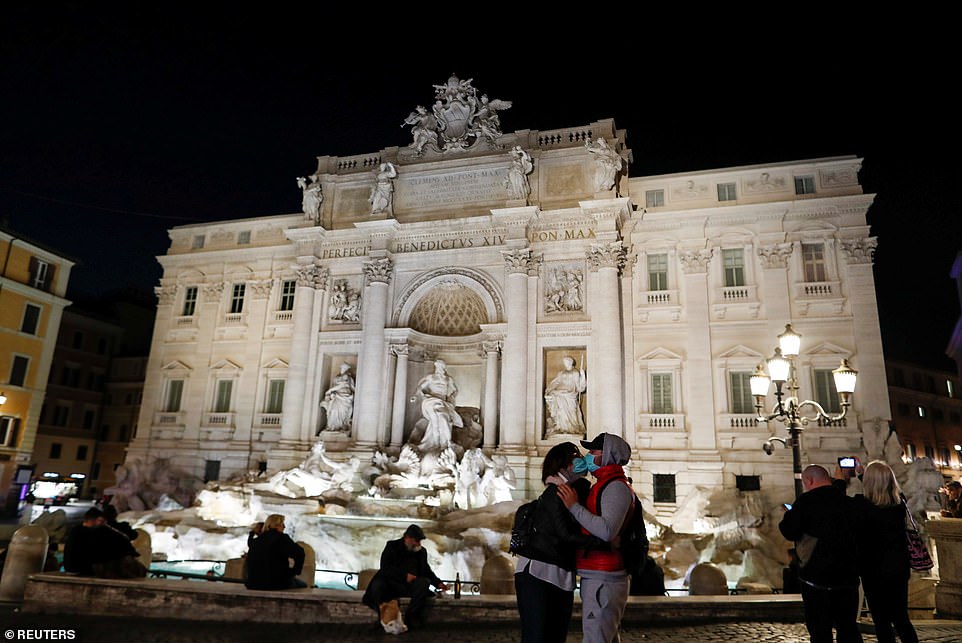 A couple kissing while wearing protective face masks in front of the Trevi fountain in Rome, after a decree ordered the whole of Italy to be on lockdown in an unprecedented clampdown aimed at beating the coronavirus 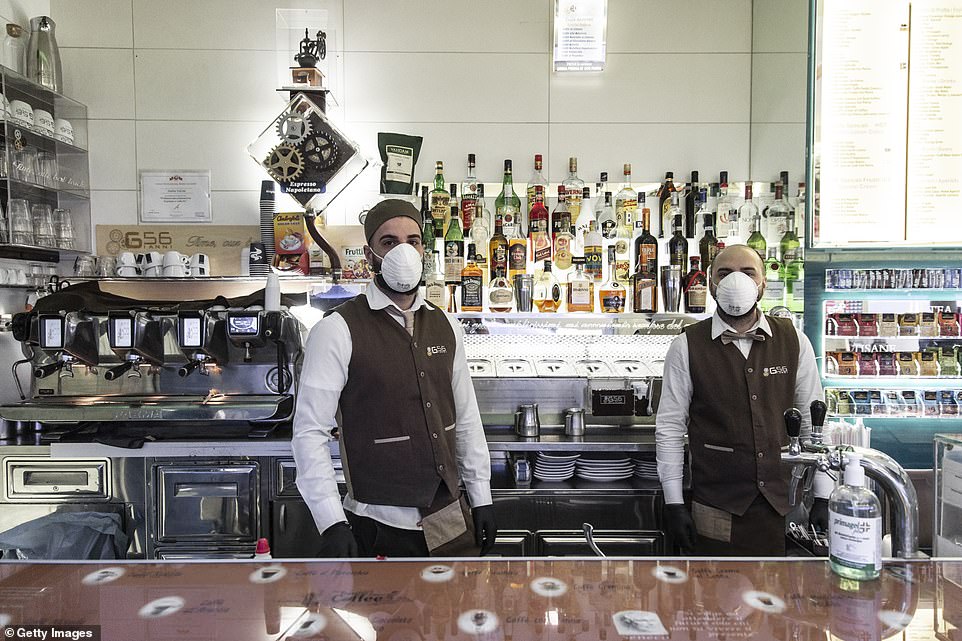 Two bartenders inside a bar wearing masks and gloves today in Salerno, Italy, after the extension of the red zone to the entire peninsula due to the spread of the coronavirus 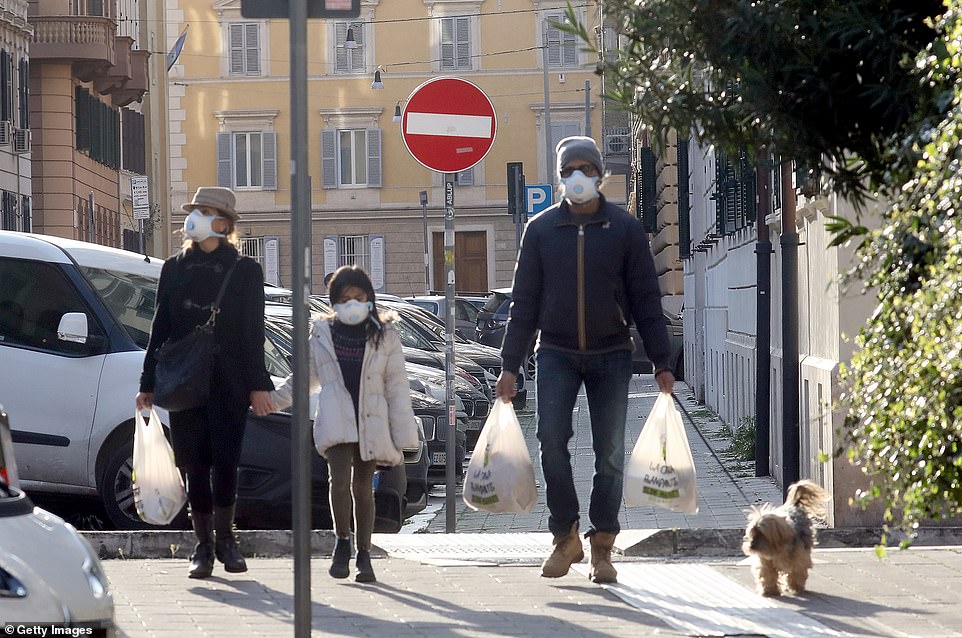 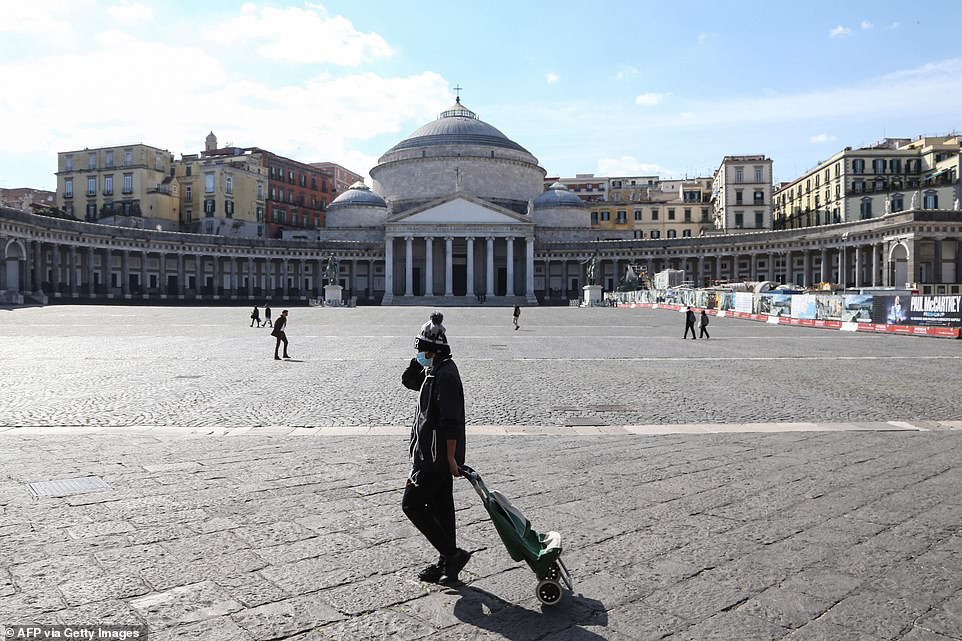 A tourist wearing a respiratory mask as part of precautionary measures against the spread of the new COVID-19 virus, walking across a deserted Piazza del plebiscito in Naples today

WHICH ARE THE 27 COUNTRIES IN EUROPE WHERE THE CORONAVIRUS IS SPREADING BETWEEN HUMANS?

This isn’t a list of European countries with confirmed coronavirus cases – only those listed as having ‘local transmission’ by the World Health Organization. The number of cases are as of 10am GMT March 9.

Merkel added to fears of mass-infection when she said up to 58 million of her countrymen could contract the fast-spreading contagion.

When she made the announcement there was silence among other politicians at the meeting, Bild reported.

Merkel told her party: ‘Sixty to 70 per cent of people in Germany will become infected with the coronavirus. We are facing a challenge that we have never had before.’

Germany, which has so far seen two deaths from the disease that has infected more than 110,000 people worldwide, has a population of 82.9 million people.

Spahn confirmed the Chancellor’s figures if a vaccine is not developed before the virus takes hold of Europe, but added that many patients would be symptom-less.

The Spanish capital Madrid is taking drastic measures to prevent the spread of the disease by closing all schools and universities and disinfecting public transport every day.

Even though the tourist season is fast approaching the government of Catalonia – which includes the popular destination of Barcelona – has said they will bring in similar measures if necessary.

Barcelona’s Champions League last-16 second leg match with Napoli scheduled for March 18 will take place without spectators due to fears over the spread of the coronavirus, a club spokesman said today.

Spanish parliament’s lower house suspended all activities for at least a week after lawmaker Javier Ortega Smith’s party Vox revealed he had been diagnosed with coronavirus, El Pais reported.

It comes after the last Britons who were quarantined at the H10 Costa Adeje Palace Hotel in Tenerife were finally allowed to leave today after Italian tourists tested positive for the virus there.

A British father tested positive in Majorca last month. The 46-year-old patient caught the killer bug in France but only developed symptoms on return to his Palma home on the Spanish island.

Twenty-eight people have died in Spain from the virus, official figures show. There are a total of 1,204 cases, still far behind Italy’s tally.

Prime Minister Pedro Sanchez said earlier on Monday, without giving details, that the government was preparing plans to mitigate the impact of the virus on the Spanish economy.

Elsewhere in Europe, Albania reported its first confirmed cases of the killer coronavirus today – a father and son who drove back from Florence.

The unidentified pair – a 54-year-old and his 28-year-old – are in hospital in Tirana, the capital of Albania. Both are in a stable condition.

Albania today also announced it will close schools and ban public gatherings for two weeks because of the outbreak.

Four European countries – Turkey, Cyprus, Montenegro and Kosovo – have yet to announce any COVID-19 cases.

Under new measures brought in on Monday, Germany introduced drive-through health screenings where health officials are able to swab patients for the killer infection while they sit in their cars.

The NHS in the UK has already set up drive-thru coronavirus test centre in a bid to keep infected patients away from hospitals. Similar testing methods have been used in South Korea and China.

Today it was announced that large cultural events in the German capital’s theatres, operas and concert houses will be cancelled from tomorrow to prevent coronavirus contagion.

The measure will remain in place until April 19, and will also affect concerts at the renowned Berlin Philharmonic, Berlin’s pointman on culture, Klaus Lederer, said Tuesday, adding that it was ‘regrettable but one must assume the responsibility’.

Organisers of smaller shows in locations holding up to 500 people will have to decide individually if their events will go ahead, in accordance with guidance given by the federal disease control centre Robert Koch Institute. 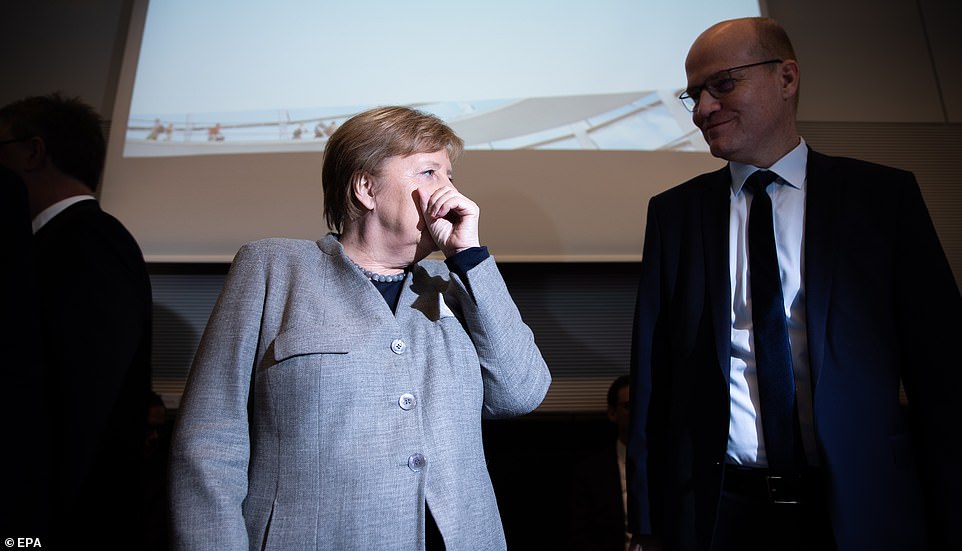 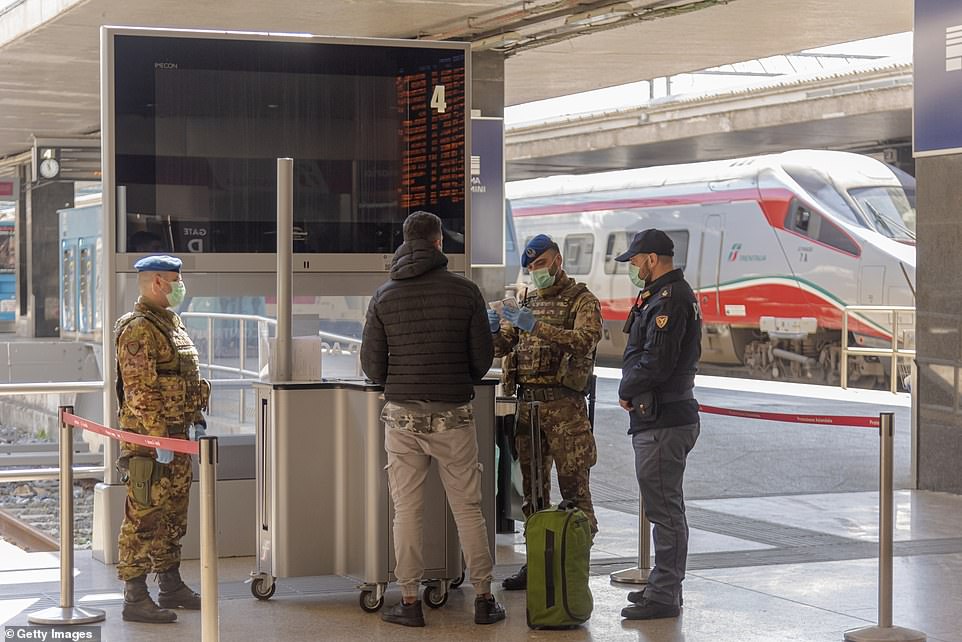 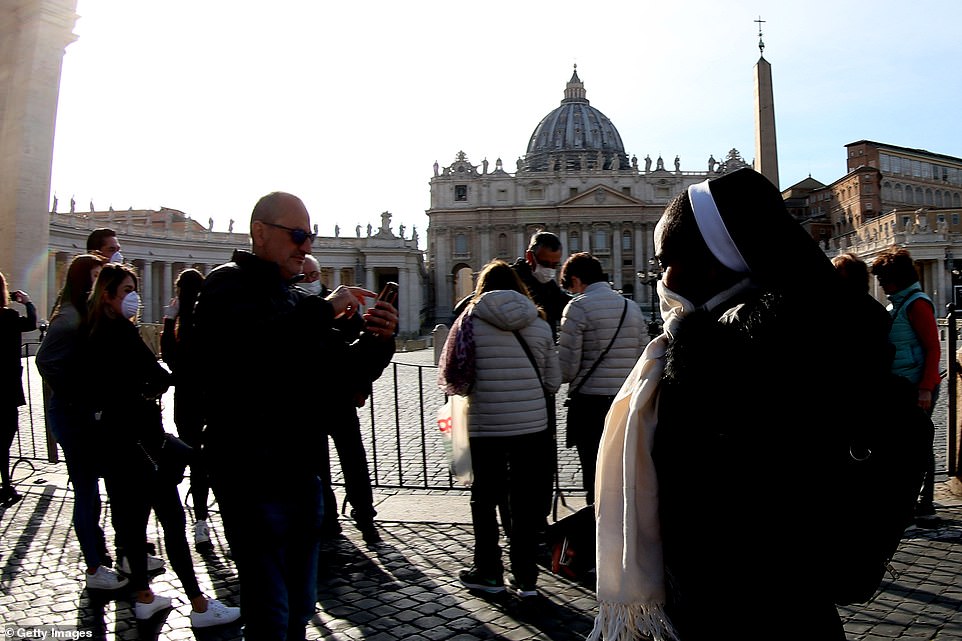 Tourists wearing protective face masks as they arrived at an empty and closed St. Peter’s Square due to the Vatican authority decision to close the square to the all visitors today 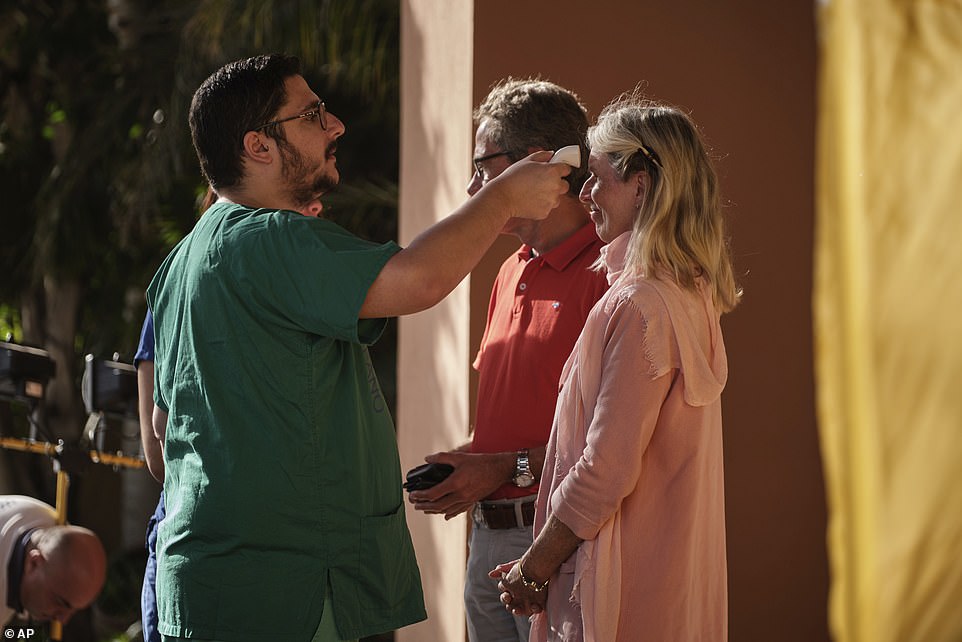 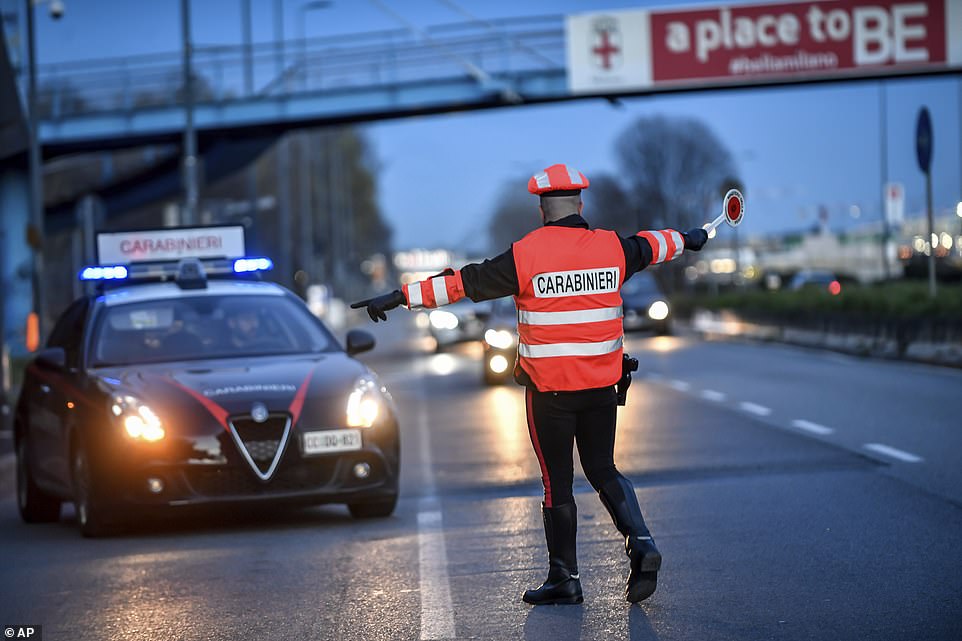 A policeman checking cars entering Milan in northern Italy today. Italians moving from one place to another must certificate they are doing it for work or important personal or health reasons, following the latest measures to slow down the diffusion of the coronavirus 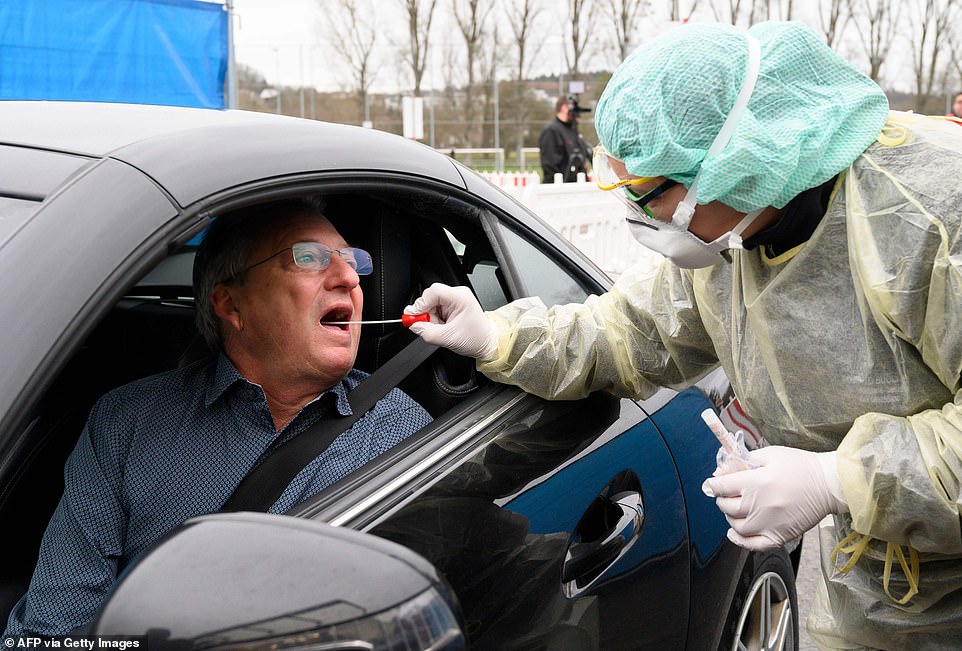 Peter Keck (left), spokesman of the Esslingen district administration, posing from a car to demonstrate how works the new ‘Drive-In’ virus tests work in Nuertingen on Monday 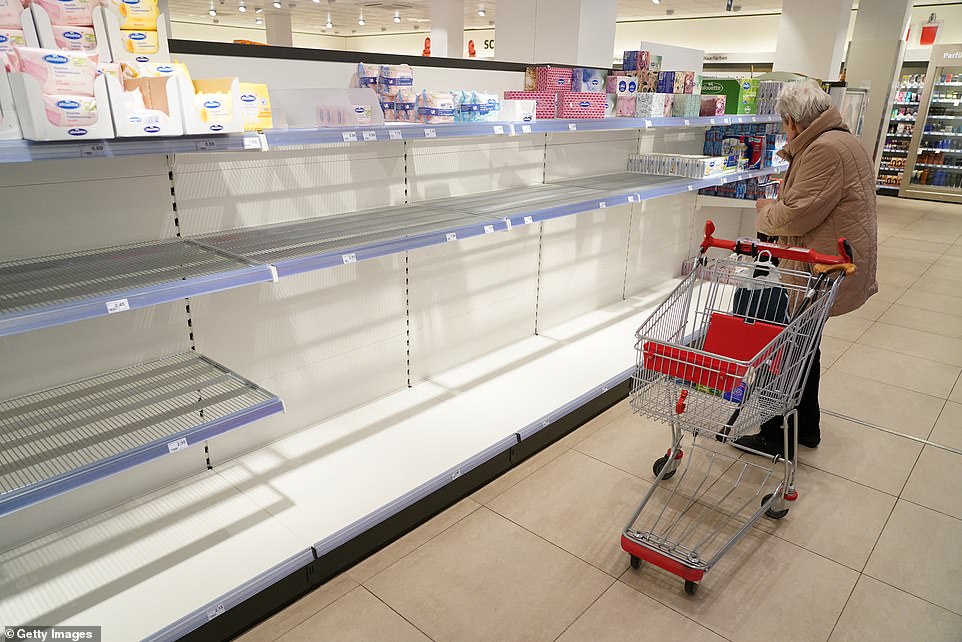 Spahn had recommended that events with more than 1,000 people should be scrapped until further notice, after coronavirus cases in Germany soared past 1,100 this week.

Several Bundesliga games will be played without spectators, while other huge fairs including Berlin’s ITB travel show and the Hannover Messe technology event have been scrapped.

Everything that is non-essential should be cancelled to contain the virus, Merkel said, adding: ‘Games behind closed doors are not the worst thing that can happen in this country.’

Germany’s biggest cluster of infected patients are in the country’s most populous state North Rhine-Westphalia, where 323 cases have been reported in the district of Heinsberg alone.

Two people have also died of the virus in the state.

As of Monday, Germany had registered 1,139 coronavirus cases with two fatalities, according to government data.

President Donald Trump today said the coronavirus outbreak would ‘go away’ and urged Americans to remain calm as cases jumped and the White House came under mounting pressure to boost its response to the health and economic crisis.

A steady rise in the number of US cases of COVID-19 has concerned health officials and spurred calls within Congress for action to expand testing and avert an economic meltdown.

About three quarters of US states now have confirmed COVID-19 with over 800 Americans infected, Washington state’s governor warned of tens of thousands more cases without ‘real action’ and New York’s governor deployed National Guard troops as a containment measure in a hard-hit New York City suburb. 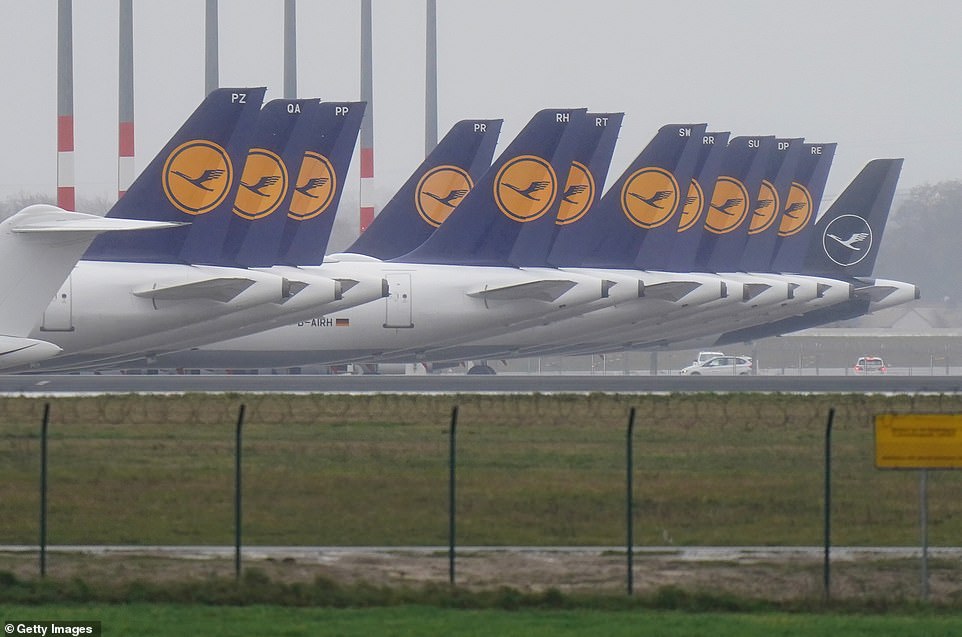 Lufthansa announced it has slashed over 7,000 flights scheduled for March due to a fall in demand in the wake of public fear over the coronavirus 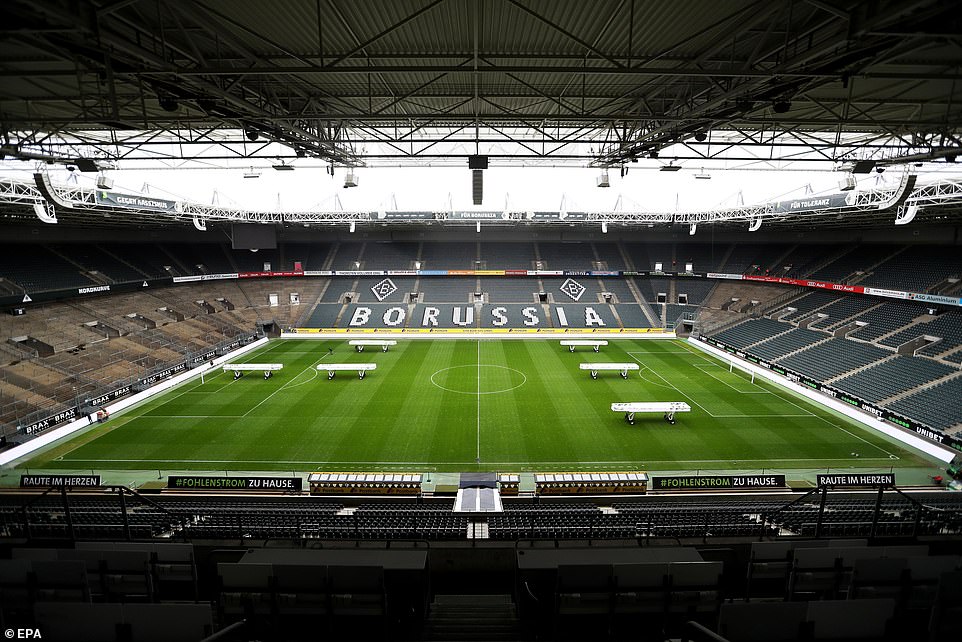 The outbreak is hitting the German economy through cancellations in the tourism sector and industry is expected to suffer supply chain problems in coming weeks, Economy Minister Peter Altmaier added today.

Asked if Europe’s largest economy was heading into a recession in the first half of this year, Altmaier said the situation was very difficult and that he hoped Germany could avoid the type of coronavirus-related restrictions to travel and civic life enforced in Italy.

China, where the coronavirus was first diagnosed in late 2019, is Germany’s biggest trading partner, and German companies depend on both Chinese demand and supply chains.

Seaborne deliveries from China can take up to six weeks, so the epidemic and related production stops there are hitting the German economy with a time lag.

Merkel told lawmakers from her conservative bloc that Germany does not need an economic stimulus plan now to counter the impact of the coronavirus but rather liquidity injections.

Iran announced 43 new deaths from the virus in the past 24 hours, bringing the overall toll to 237 dead, one of the world’s highest. (again not reliable or substantiated)

The Islamic Republic confirmed 595 new cases across the country bringing their overall confirmed cases to 7,161.

Globally, more than 110,000 people have been infected with the coronavirus and more than 4,000 have died.