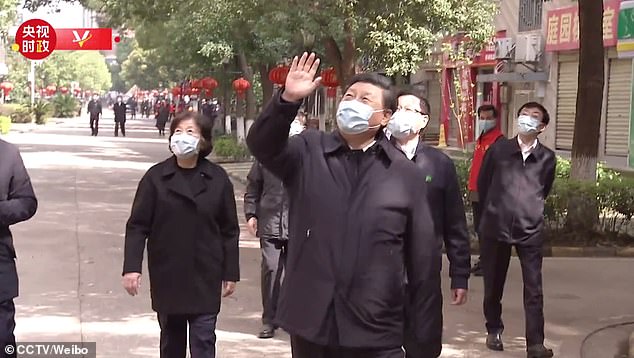 By AFP and TRACY YOU FOR MAILONLINE

Chinese President Xi Jinping has visited Wuhan for the first time since the city emerged as the centre of the coronavirus epidemic in January – a major sign that Beijing believes the outbreak is under control.

The timing of Xi’s visit indicates that China is ready to declare victory over the health crisis, which has killed at least 3,136 people in the nation and 4,062 worldwide, according to experts.

Xi today inspected a 1,000-bed hospital constructed in 10 days to fight the deadly disease before touring a local community to call on residents in quarantine.

His visit came as Wuhan authorities have closed all of the city’s 14 makeshift ‘fang cang’ hospitals – which were converted from sports halls and exhibition centres – after they treated some 12,000 patients.

It also came as unprecedented quarantine measures that have sealed off the city of 11 million and the rest of central Hubei province since late January appear to have paid off, with new infections dropping dramatically in recent weeks. 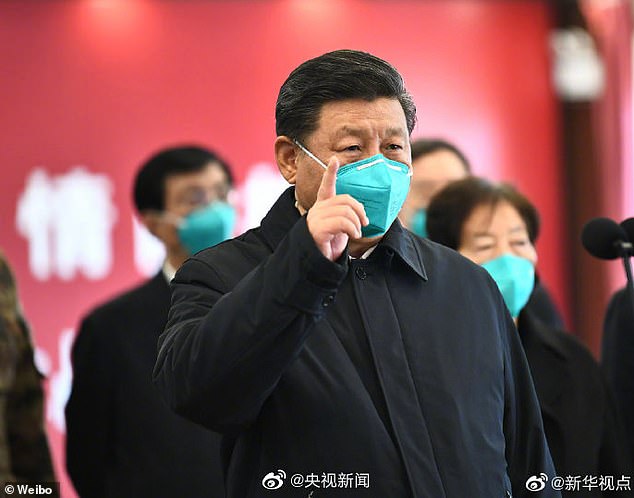 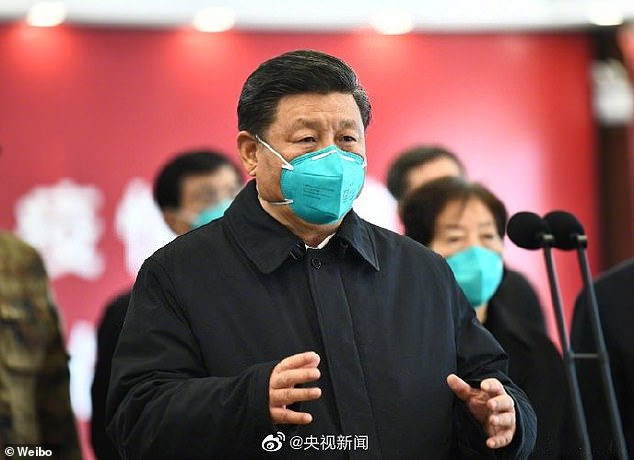 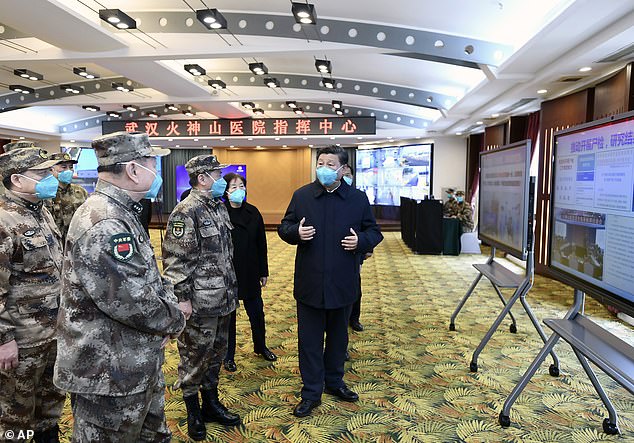 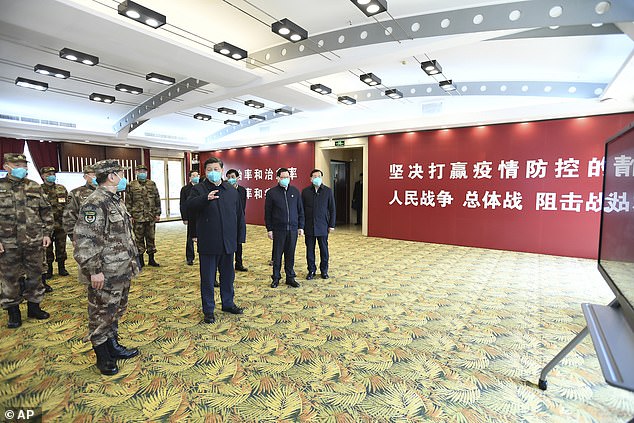 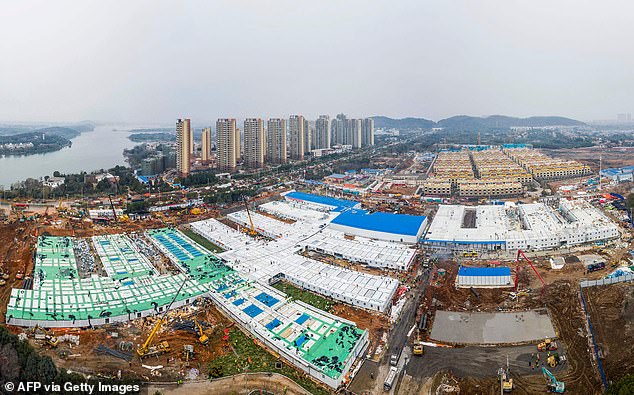 Huoshenshan Hospital was built from the ground in just 10 days to curb the epidemic. This aerial photo taken on February 2 shows the 1,000-bed hospital largely completed in Wuhan

China’s progress stands in stark contrast with the growing global crisis, with cases now growing at a faster pace abroad, and Italy enacting its nationwide lockdown.

More than 100 countries are now fighting the contagion, which has infected over 114,400 people globally.

A video released by China’s state broadcaster CCTV shows Xi, who arrived by plane in Hubei’s capital, wearing a mask as he spoke via video-link to front-line medical workers and patients in Huoshenshan or Fire God Mountain Hospital.

Huoshenshan started treating patients from February 4 after being built from the ground in just 10 days to combat the fast-spreading infection.

Its sister facility, Leishenshan or Thunder God Mountain Hospital, was completed in 12 days. 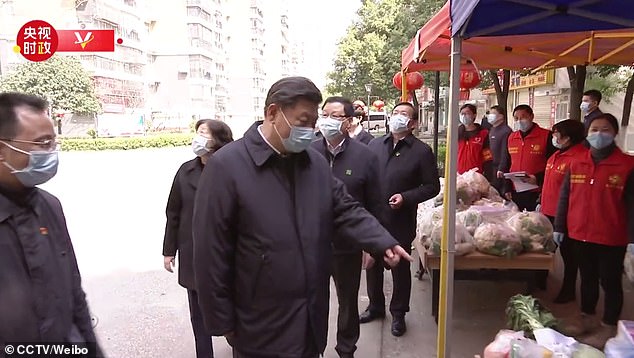 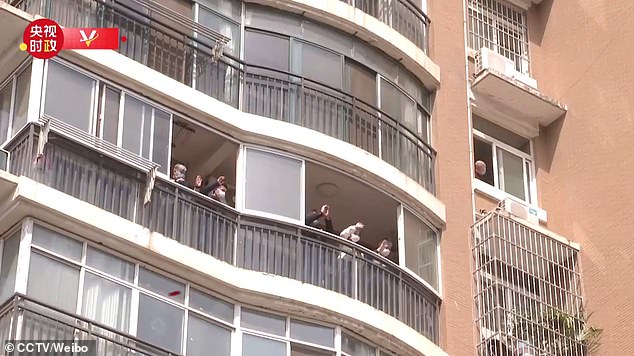 Another clip shows the locals waiving at Xi from their balconies and a mask-donning Xi greeting them back while walking in the neighbourhood.

Xi is also filmed talking to community volunteers in charge of distributing necessities and carrying out health campaigns.

Xi’s neighbourhood tour came just five days after China’s Vice Premier Sun Chunlan was heckled during an inspection by the city’s isolated residents who reportedly complained about being neglected.

A video shows the locals chanting ‘fake, fake’ out of their windows as they allegedly claimed that Sun was being shown a ‘fake’ delivery of food.

Residents in Wuhan shout ‘Fake!’ at officials inspecting the city 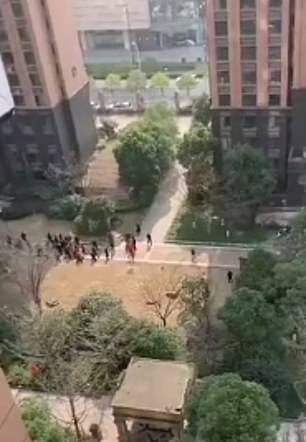 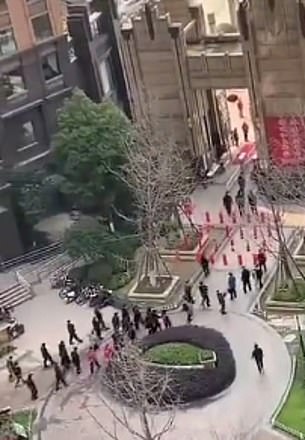 Quarantined residents have been captured on camera yelling ‘fake, fake’ at a group of Beijing officials who are inspecting the residential compound in Qingshan District of Wuhan 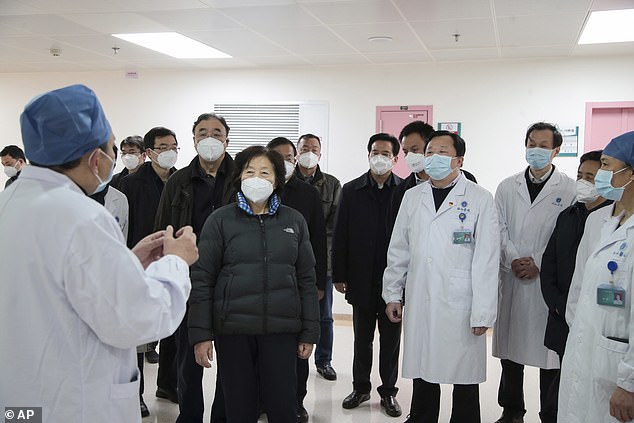 Sun Chunlan (pictured), the Chinese Vice Premier, was touring an isolated complex in Qingshan District of Wuhan yesterday. She is seen here visiting a hospital in Wuhan 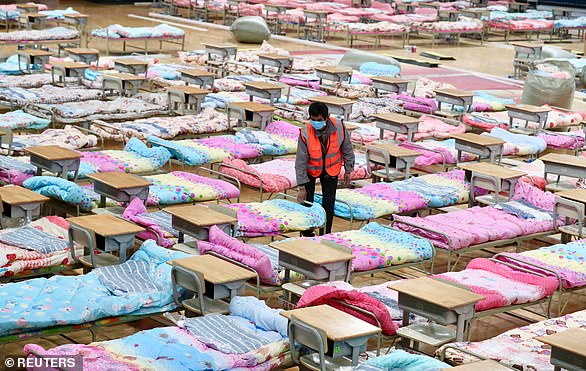 The Wuchang ‘fang cang’ hospital, which had been converted from Hongshan Gymnasium, discharged its last 49 patients at a closing ceremony, said the Wuhan government through its official social media account.

Wuchang hospital was the first ‘fang cang’ facility to open in the city. It started to receive patients from February 5 and operated continuously for 34 days.

A total of 833 patients recovered after being treated there and 291 people were transferred to other medical facilities, authorities announced.

Fourteen such facilities were set up, treating more than 12,000 people who suffered minor coronavirus infections.

On March 1, the ‘fang cang’ hospitals in Wuhan Gymnasium in Qiaokou District became the first makeshift facility to close.

Two others shut on March 6 and March 8 respectively and another two discharged their last patients yesterday.

China’s most powerful leader since Mao Zedong is usually a daily fixture in state media but has stayed out of the spotlight for much of the crisis and assigned Premier Li Keqiang to oversee the response to the epidemic.

Li and Vice Premier Sun have already visited the virus-stricken city of Wuhan.

But as the number of new cases has fallen in recent weeks, state media has played up Xi’s role in the fight against the outbreak, releasing a speech last month in which he said he had been giving instructions since early January.