Updated about an hour ago

As federal and state governments face criticism for failing to provide enough public information about the spread of coronavirus, the ABC has compiled the first public, national database tracking confirmed COVID-19 cases.

One third of all 449 confirmed cases in Australia were reported in the past 48 hours, the figures show.

The data — which tracks confirmed cases by gender, age, location and source of infection — compiles information in case reports published by state and federal health authorities, and supplements this with additional reporting by ABC News.

It records the details of every confirmed case since January 25, when NSW and Victoria reported the country’s first four cases, until just before 1pm AEDT on Tuesday March 17. It is updated daily to show the spread of the disease across Australia’s states and territories.

Coronavirus update: Follow all the latest news in our daily wrap

That rate of growth is similar across NSW, Victoria, Queensland and South Australia.

Every state and territory has recorded at least one confirmed case.

NSW has the highest number of cases, making up more than 46 per cent of the total number of infections, followed by Victoria, then Queensland.

However, the picture shifts when population size is taken into account. Adjusting the figures for the number of residents shows NSW has the highest rate of infection per 100,000 residents, followed by SA, then Queensland.

The ACT and the NT have the lowest rates of infection.

When a case is confirmed, health authorities undertake detailed tracing to identify the source of transmission. So far, most confirmed cases were acquired overseas.

Authorities have provided information about specific destinations in only half of the cases acquired overseas.

Among those cases, the United States was the most common country visited, followed by Italy, China, Iran and the UK.

And while the Diamond Princess cruise ship is not a country, it remains one of the top sources of infection.

The database provides insight not only into how and where people are catching the disease but also who has been diagnosed with COVID-19.

Across the country, more men than women have tested positive for coronavirus but the figures vary significantly between the states and territories, especially in Victoria.

In Victoria, twice as many men as women have been diagnosed with COVID-19. 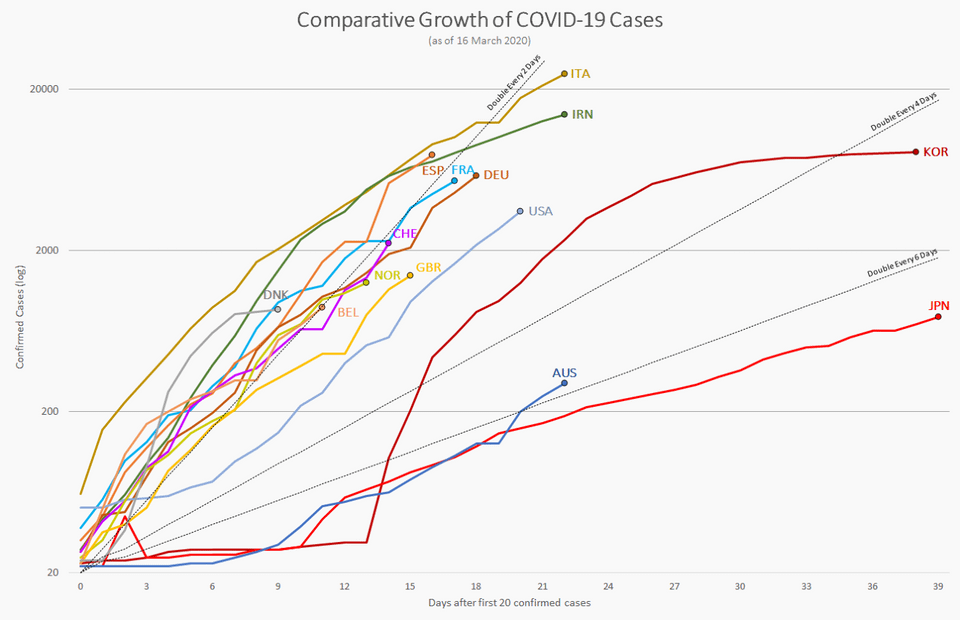 This Graph shows few countries are tackling the virus head on and the growth in the number of cases is exponential. Australia by the look of it is on the WRONG trajectory