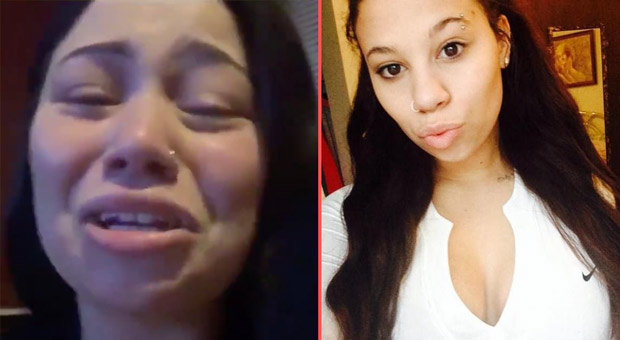 By: Jack Murphy  |@NeonNettle on 4th June 2020 @ 12.00am © press Jasmine Kelly (left) took to Facebook Live to warn the public her sister Italia Marie Kelly (right) was killed by a protester

A teen girl, whose sister was shot and killed by a protester during riots in Davenport, Iowa, has issued a public warning about the tragic death that has been under reported in the media.

Late Sunday night, two people were fatally shot and two others, including a police officer, were injured as gunfire rang out during the George Floyd protests-turned-riots in Davenport.

Among those killed was 22-year-old biracial woman Italia Marie Kelly.

Kelly was fatally shot by another protester while getting into a car, according to the young woman’s family.

Kelly’s 19-year-old sister Jasmine Kelly has now taken to Facebook Live to alert the public, warning that “a protester shot my sister: A protester, not the police!”Have your say –

Following the tragic and senseless shooting, Jasmine Kelly is blasting the violence and ripping into the “ignorant” protesters who took her sister from her.

“My sister is gone because one of you, a protester, shot my sister. A protester, not the police!”

“Because you guys, I lost my sister,” she continued.“I lost my sister because of you. You! “You are so mad at the police that you are hurting everyone else.

“You’re so mad at the police, you guys killed my sister.”“For those who don’t know, it wasn’t the police who shot my sister, it was one of y’all!” she exclaimed.“And I swear to God we will find out who the f*** did it, and I promise to God it will be the last thing y’all ever remember,”

Jasmine said, in tears.“Y’all wild as f***, y’all walk around with guns, and you act and you pretend to be tough and you pretend to be something you’re not, and you got my sister killed.” “Not by the police,” she emphasized, “but by your ignorance, by you’re f***ing ignorance I gotta bury my sister. “I gotta bury my sister because y’all brought guns. “It wasn’t a rubber bullet, it was a f***ing gun.”

One thought on “Sister of Girl Killed in Riots Warns Public: ‘Protester Shot My Sister, Not Police’”