(Natural News) Just as the mainstream media utterly destroyed its credibility in trying to remove President Trump from office, the medical establishment is committing credibility suicide in a mad rush to try to suppress the truth about hydroxychloroquine, an off-patent drug that can save patients from covid-19.

In the latest stunning demonstration of brazen quackery and junk science, both The Lancet and the New England Journal of Medicine have published a widely-touted science paper trashing hydroxychloroquine that turns out to be based on data acquired from a company run in part by a science fiction author and an adult content model. None of the individuals from the company appear to have any background whatsoever in legitimate science or epidemiology. The data from this company, known as “Surgisphere,” appear to have been wholly fabricated. Yet it was the dominant source of data for the study published by those science journals, neither of which has retracted the flawed study.

The study, published in The Lancet on May 22, 2020, is found at this link. Its authors include Prof Mandeep R Mehra, MD, Sapan S Desai, MD, Prof Frank Ruschitzka, MD and Amit N Patel, MD. Sapan Desai is the founder of Surgisphere, the company that claims to have provided the data for the study.

As The Guardian explains in its investigative report:

The Lancet study, which listed Desai as one of the co-authors, claimed to have analysed Surgisphere data collected from nearly 96,000 patients with Covid-19, admitted to 671 hospitals from their database of 1,200 hospitals around the world, who received hydroxychloroquine alone or in combination with antibiotics.

The negative findings made global news and prompted the WHO to halt the hydroxychloroquine arm of its global trials. But only days later Guardian Australia revealed glaring errors in the Australian data included in the study.

All the usual fake news media outlets parroted the (false) findings of the study, including the BBC, NYT, Washington Post, CNN, NBC News, etc. None of them cared about the absolute fraud behind the study. Only The Guardian, it seems, has managed to conduct a serious investigation that exposes the total fraud.

The fraud is so obvious and so horrifying to real scientists that the scandal has earned the name “LancetGate.” Both The Lancet and the NEJM have been reluctant to pull the study because, of course, discrediting hydroxychloroquine (plus zinc) is a necessary step to clear the way for hundreds of billions of dollars in profits for the vaccine companies that fund the medical journals. The fabricated study published in the journals was used to cancel clinical trials on hydroxychloroquine, which was the goal from the very start. As the Guardian reports:

Data it claims to have legitimately obtained from more than a thousand hospitals worldwide formed the basis of scientific articles that have led to changes in Covid-19 treatment policies in Latin American countries. It was also behind a decision by the WHO and research institutes around the world to halt trials of the controversial drug hydroxychloroquine.

The study claims the data were acquired through a seemingly credible, complex system that should be reliable. Here’s the sciency-sounding jargon used in the study text to describe where the data come from:

The Surgical Outcomes Collaborative (Surgisphere Corporation, Chicago, IL, USA) consists of de-identified data obtained by automated data extraction from inpatient and outpatient electronic health records, supply chain databases, and financial records. The registry uses a cloud-based health-care data analytics platform that includes specific modules for data acquisition, data warehousing, data analytics, and data reporting. A manual data entry process is used for quality assurance and validation to ensure that key missing values are kept to a minimum. The Surgical Outcomes Collaborative (hereafter referred to as the Collaborative) ensures compliance with the US Food and Drug Administration (FDA) guidance on real-world evidence. Real-world data are collected through automated data transfers that capture 100% of the data from each health-care entity at regular, predetermined intervals, thus reducing the impact of selection bias and missing values, and ensuring that the data are current, reliable, and relevant. Verifiable source documentation for the elements include electronic inpatient and outpatient medical records and, in accordance with the FDA guidance on relevance of real-world data, data acquisition is performed through use of a standardised Health Level Seven-compliant data dictionary, with data collected on a prospective ongoing basis. The validation procedure for the registry refers to the standard operating procedures in place for each of the four ISO 9001:2015 and ISO 27001:2013 certified features of the registry: data acquisition, data warehousing, data analytics, and data reporting.

It all sounds really credible and sciency, right? Except for the fact that the company apparently fabricated everything.

The entire study was fake. Congratulations on using garbage science from con artists to scare sick people away from potentially life-saving treatment. Hope the dank anti-Trump burns were worth it. https://twitter.com/julianborger/status/1263819256682237953 …

Trump on hydroxychloroquine, April 4: “What do you have to lose? Take it.”

The Guardian rips the cover off the Surgisphere fraud

The Guardian (UK) has conducted an astonishingly good investigation into the Surgisphere company and has found truly shocking details that expose the raw fraud of the data behind the study. Those details include the facts like this one: “An employee listed as a science editor appears to be a science fiction author and fantasy artist. Another employee listed as a marketing executive is an adult model and events hostess.”

The Guardian also reports that the hospitals in Australia whose cooperation would have been required to gather all the data claimed by Surgisphere have never heard of Surgisphere.

The Guardian has since contacted five hospitals in Melbourne and two in Sydney, whose cooperation would have been essential for the Australian patient numbers in the database to be reached. All denied any role in such a database, and said they had never heard of Surgisphere.

Here are some other mind-blowing findings from The Guardian’s investigation that reveal Surgisphere to be a total fraud, yet widely touted as a credible data source by papers published in The Lancet and the NEJM in order to fraudulently claim hyxdroxychlorquine is extremely dangerous. From the article:

In researching this article, we also found that Surgisphere’s claims of winning various industry awards appear to have been fabricated as well. The company appears to be little more than a money-making front that fabricates data to be used by the fraudulent pharmaceutical industry to destroy the credibility of off-patent drugs in order to shift media narratives toward high-profit on-patent drugs (and vaccines, of course).

Once again, this exposes the absolute fraud behind Big Pharma, the Plandemic, and the lying mainstream media.

Today, three of the authors have retracted “Hydroxychloroquine or chloroquine with or without a macrolide for treatment of COVID-19: a multinational registry analysis” Read the Retraction notice and statement from The Lancet https://hubs.ly/H0r7gh50 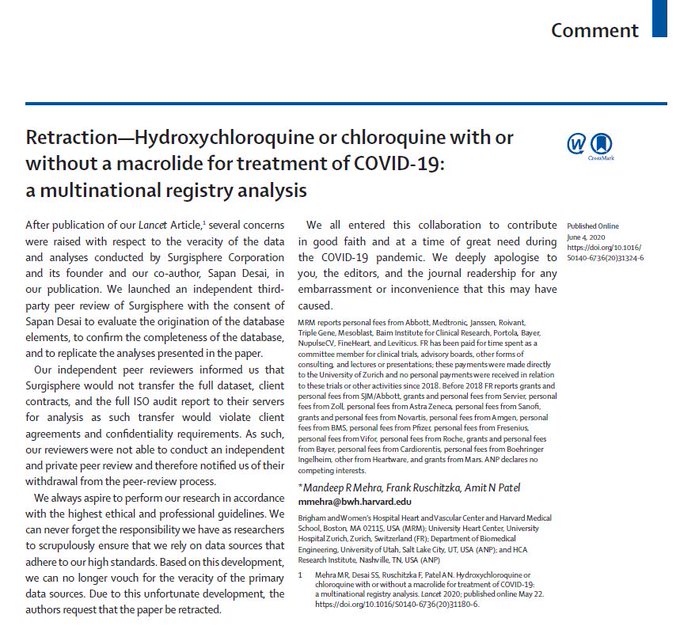 Surgisphere seems to have appeared out of nowhere, completely fabricating its entire database of “medical data”

One of the questions that has most baffled the scientific community is how Surgisphere, established by Desai in 2008 as a medical education company that published textbooks, became the owner of a powerful international database. That database, despite only being announced by Surgisphere recently, boasts access to data from 96,000 patients in 1,200 hospitals around the world.

When contacted by the Guardian, Desai said his company employed just 11 people. The employees listed on LinkedIn were recorded on the site as having joined Surgisphere only two months ago. Several did not appear to have a scientific or statistical background, but mention expertise in strategy, copywriting, leadership and acquisition.

Dr James Todaro, who runs MedicineUncensored, a website that publishes the results of hydroxychloroquine studies, said: “Surgisphere came out of nowhere to conduct perhaps the most influential global study in this pandemic in the matter of a few weeks.

“It doesn’t make sense,” he said. “It would require many more researchers than it claims to have for this expedient and [size] of multinational study to be possible.”

None of the information from Desai’s database has yet been made public, including the names of any of the hospitals, despite the Lancet being among the many signatories to a statement on data-sharing for Covid-19 studies. The Lancet study is now disputed by 120 doctors.

This shows how the fraud of the entire Big Pharma / vaccine medical system operates: They just literally “make sh#t up” and call it “science”

What this episode demonstrates with incredible clarity is the total fraud and criminal conspiracies of the Big Pharma-run medical journals and their claims of “science.” When the real science doesn’t fit their desired narrative — which always happens to promote massive Big Pharma profits — they simply “make sh#t up” and publish their falsified data as “science.”

If you’re authoring a study and being paid by Big Pharma to destroy the reputation of a particular off-patent drug, and you discover there’s no data to support your desired opinion, don’t worry: There’s always a company willing to sell you fabricated data to support your fraudulent conclusions.

The monetization of medicine via high-profit vaccines and pharmaceutical has made sure that there’s always enough money to pay off medical journals or fund the necessary data fabrication efforts to “prove” almost anything Big Pharma desires. Combined with the tech giants’ total censorship of any criticism of vaccines or pharmaceuticals, the drug giants have a virtual monopoly on speech, science, media and advertising messages. Through those nefarious monopolies, they can fabricate and push any false narrative they want, including claiming that perfectly safe and effective off-patent drugs don’t work at all.

They don’t care how many millions of people might die if safe, effective drugs are withheld from treatment protocols. Human lives be damned; their goal is to maximize profits at any cost.

Even more disturbingly, both The Lancet and the New England Journal of Medicine are more than happy to go along with the obvious fraud. After all, they’re largely funded by Big Pharma, and today’s so-called “science journals” are usually nothing more than paid infomercials for Big Pharma’s toxic drugs, almost always based on completely fabricated “evidence” that’s shrouded in the sciency-sounding language of credibility.

That sums up modern medicine: Total fraud pretending to be credible science.

And that’s why nobody believes the institutions anymore: Not the CDC, FDA, NIH, WHO or any entity that’s linked to Big Pharma profits. Everybody knows the game is totally rigged.

Birx, Fauci, and the corrupt media who peddled this fake study from a washed-up sci-fi author and a cam girl owe the entire nation an apology. How many people died from lack of treatment because our nation’s “experts” once again got duped by con artists?? 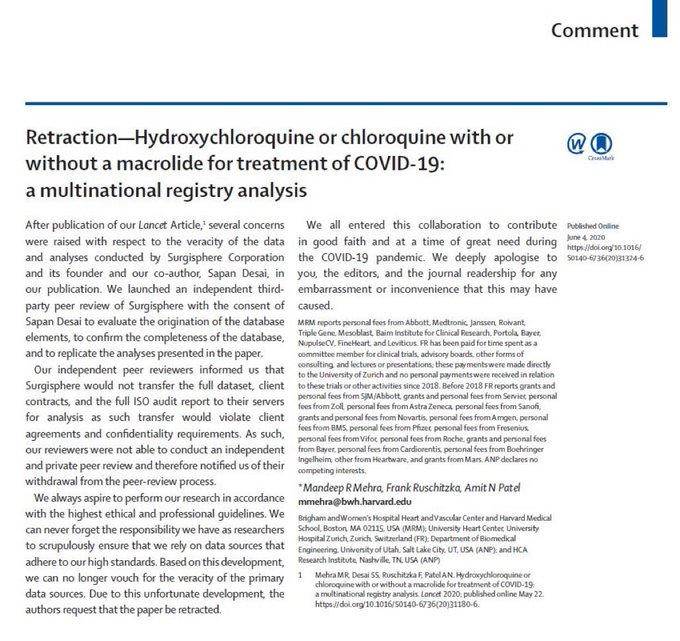 4,089 people are talking about this

So if you’re wondering why intelligent people are refusing to consent to the coming coronavirus vaccine, now we know: Because the vaccine’s “safety” will of course be completely fabricated and falsified to push Big Pharma profits, regardless of how many people die from the faulty concoction.

Stay informed. Read the truth about modern medicine at Medicine.news.

Previous :Candace Owens: George Floyd was a violent criminal felon, and racially-motivated police brutality against blacks is a fabricated media myth
Next :Full video now released: How to make your own colloidal silver using silver coins, step by step