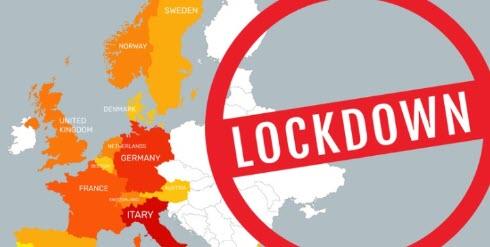 Authored by Ryan McMaken via The Mises Institute,

In recent days governments in Australia, Europe, and the US have moved toward imposing a new wave of forced lockdowns in the name of fighting the spread of COVID-19.

Australia has imposed harsh new lockdown measures, including a curfew from 8 pm to 5 am.

Those restrictions include a curfew in Melbourne for the next six weeks, a ban on wedding gatherings, and schools must go back to online classes. … Only one person per household is allowed to leave their homes once a day — outside of curfew hours — to pick up essential goods, and they must stay within a 5 kilometer (3.1 miles) radius of their home.

Meanwhile in Europe, Belgium is threatening a “total lockdown” even as it tightens other measures, which now means “a family or those living together can meet only the same five people from outside their household over the next four weeks.” (Belgium has been in a state of lockdown in all but name for months, since even until the most recent restrictions, an individual was allowed to meet in person with only 15 different people per week.)

How’s That Working For You? Sweden’s Herd Immunity Strategy Comes Up Fatally Short

Other regions of Europe are discussing similar measures.

[T]he Spanish region of Catalonia may also have to reintroduce lockdown measures if outbreaks are not brought under control within 10 days.

In France, the health minister has called for greater vigilance after a sharp rise in Covid-19 cases in young people, and Germany’s public health advisory body has said it is “deeply concerned” about the rise in cases over the past few weeks.

With these new restrictions will come more economic devastation, more unemployment, more suicide, more drug overdoses, and more cancer death. This cycle is likely to repeat itself because lockdowns do not make diseases go away. They only— assuming the theory behind the lockdown is actually true— spread out infections into the future.

Consequently, it increasingly looks like the global public should expect regimes to keep locking down their citizens again and again. The only possible end to this cycle will be if (a) populations revolt against lockdowns, or (b) herd immunity is reached either through widespread transmission or through a vaccine.

The preferred course of action on the part of the experts and politicians is clear: lockdown forever, or until there’s a vaccine.

The “Successful” First Round of Lockdowns

Yet  just a few weeks ago, though, we were hearing about what success stories lockdowns were in Europe and Australia. A commonly used phrase in the media has been that European regimes have “beat back” the virus.

The actual outcomes were apparently immaterial, so long as lockdowns are imposed. It seemed that by definition, a country that employed a lockdown strategy is successful. This is perhaps the only possible explanation for why some experts have ridiculously asserted Italy—among the worst countries in the world in terms of deaths attributed to COVID— “beat” the disease with lockdowns.

The implication of of all these declarations of “victory” was that if sufficiently harsh lockdowns were adopted, then COVID-19 would be under control.

Some even insisted that lockdowns could make the disease disappear. Australian health bureaucrats, for example, suggested that lockdowns could cause the disease to be eliminated entirely. This Australian report claims “it is expected that the virus would die out within Australia” if extreme social distancing mandates are maintained for “months.” Another “expert” proclaimed in June: ““Having brought the case numbers right down [in Australia], we may not need lockdowns again.”

But if we employ the logic of the advocates of lockdowns themselves, there has never been any reason to presume that lockdowns can “beat back” a disease or eliminate it.

The Logic of Lockdowns, As Stated by Advocates

The claim that forced lockdowns lead to fewer deaths has always been debatable. Some countries with harsh lockdowns, like Spain and the UK, have worse per capita death totals than countries and jurisdictions with no mandatory lockdowns, such as Sweden in Europe, and Utah and Iowa in the US.

But for the sake of argument, let’s accept that lockdowns do help to slow—i.e., not prevent—the transmission of disease. (We’ll ignore, for now, the deaths caused by lockdowns themselves.)

The logic therefore is this: a slowing of transmission prevents hospital resources from being overwhelmed. This, it is assumed a certain minimum level of quality can be maintained at medical institutions with the help of lockdowns. Thus, the best that can be hoped for is that some lives will be saved by ensuring hospital beds will continue to be available. But, over time, the total number of infections is the same because lockdowns do nothing to actually eliminate the disease.

In the United States, this has, so far, been accomplished.

No health system has yet been overwhelmed, and no hospital system has run out of ventilators. Any lives that might have been lost due to a lack of hospital beds have been preserved, whether through luck, lockdowns, or unknown circumstances.

But how many lives exactly have been saved, and exactly how many hospital systems would have been overwhelmed without mandated lockdowns? This is unknown and cannot be known because any number proffered for total “lives saved” requires counterfactuals. The idea that “millions of lives” have been saved by lockdowns in the US and Europe is pure theater. Moreover, any benefit that can be gained from lockdowns must be compared against increases of “deaths of despair,” increased child abuse, and deaths due to neglected medical conditions as a result of lockdown policies. And then, of course, there is the fact lockdowns constitute human rights violations against the basic right to seek employment and income.

From “Flatten the Curve” to “Lockdowns Until Vaccine”

That lockdowns bring economic, social, and psychological devastation has long been obvious to more astute observers. This is why the lockdown strategy was at first sold to the public as a strictly temporary and limited option.

During the early days of the COVID-19 panic, politicians and technocrats justified the lockdowns on the rationale “15 days to slow the spread.” But then the rationale changed. We saw this shift begin to take shape in early April when, for example, US health bureaucrat Anthony Fauci claimed it would be impossible to even “relax” mandatory social distancing until there were “essentially no new cases, no deaths for a period of time” Former presidential advisor Ezekiel Emanuel insisted “The truth is we have no choice.” but to remain locked down for “for the next 18 months or more.”

Since then, it has become increasingly clear the preferred policy of the health technocracy is one of permanent lockdown. Both inside the US and outside, we have repeatedly heard that, worldwide, “normalcy may not be possible before a vaccine is widely available.”

What If There’s No Vaccine Coming?

But what if there’s no vaccine right around the corner?

Earlier this week, WHO Director-General Tedros Adhanom Ghebreyesus said during a press conference from the agency’s Geneva headquarters. “However, there is no silver bullet at the moment and there might never be.” British PM Boris Johnson has admitted a vaccine is “by no means guaranteed.” Given the history of failed attempts at creating vaccines for coronaviruses, there’s no reason to assume this coronavirus will have a vaccine in 2020, or 2021, or even beyond.

One thing we can assume, though, is that politicians and health bureaucrats will seek to continue to keep the world in lockdown indefinitely.

They want “immunity passports.” They want a police apparatus capable of enforcing mask mandates, forced house arrest, and any other form of “lockdown” they deem necessary.

They want to maintain the fiction that the only two options available are: world-ending plague and endless lockdown.

Unfortunately for the experts, we’ve already seen the likely scenario that results from a policy of no mandatory lockdown: The case of Sweden. Sweden’s total per capita death toll is by no means presently among the lowest. But Sweden has always maintained that over the long term, the total per capital death toll of COVID-19 will be similar across countries regardless of their lockdown policies. Even now, Sweden’s death toll is better than that of the UK, Belgium, Spain, and Italy, all of which have enacted draconian lockdowns. In fact, the Swedish model looks increasingly prescient as time goes on. While the rest of Europe is talking about surges in cases and new lockdowns, the number of Swedish case continues to decline, while total ICU hospitalizations have plummeted.

Meanwhile, Sweden was the only “the only major economy to grow in the first quarter of the year” while most of Europe was in economic disarray.