The Gulf Coast could be hit with a double threat next week as two newly formed tropical storms are predicted to hit at the same time on Wednesday.

Forecasters warn that tropical storms Laura and Marco could even get sucked into an terrifying dance around each other, or fall apart as they soak the Caribbean and Mexico this weekend.

If both storms survive the weekend, the National Hurricane Center forecasts that Laura would strengthen to a hurricane and barrel toward the central Gulf Coast around Louisiana, Mississippi, Alabama and the western Florida Panhandle, while Marco aimed at Texas, is more likely to remain a tropical storm

‘A lot of people are going to be impacted by rainfall and storm surge in the Gulf of Mexico,’ said Joel Cline, the tropical program coordinator for the National Weather Service.

But computer forecast models varied so much as of Friday evening, that some saw Laura becoming a major hurricane nearing the U.S., while others saw it dissipating completely.

‘Since you simply don´t know you really need to make precautions,’ Cline added.

Two hurricanes have never appeared in the Gulf of Mexico at the same time, according to records going back to at least 1900, said Colorado State University hurricane researcher Phil Klotzbach. The last time two tropical storms were in the Gulf together was in 1959, he said.

Laura, which set a record for the earliest 12th named storm of a season when it formed Friday morning, was moving through the northern Leeward Islands late Friday, about 195 miles (315 kilometers) southeast of San Juan, Puerto Rico. It had maximum sustained winds of 45 mph (75 kph) and was heading west at 18 mph (30 kph).

Just the day prior to the storm forming, six waterspouts swirled simultaneously off the Louisiana coast. 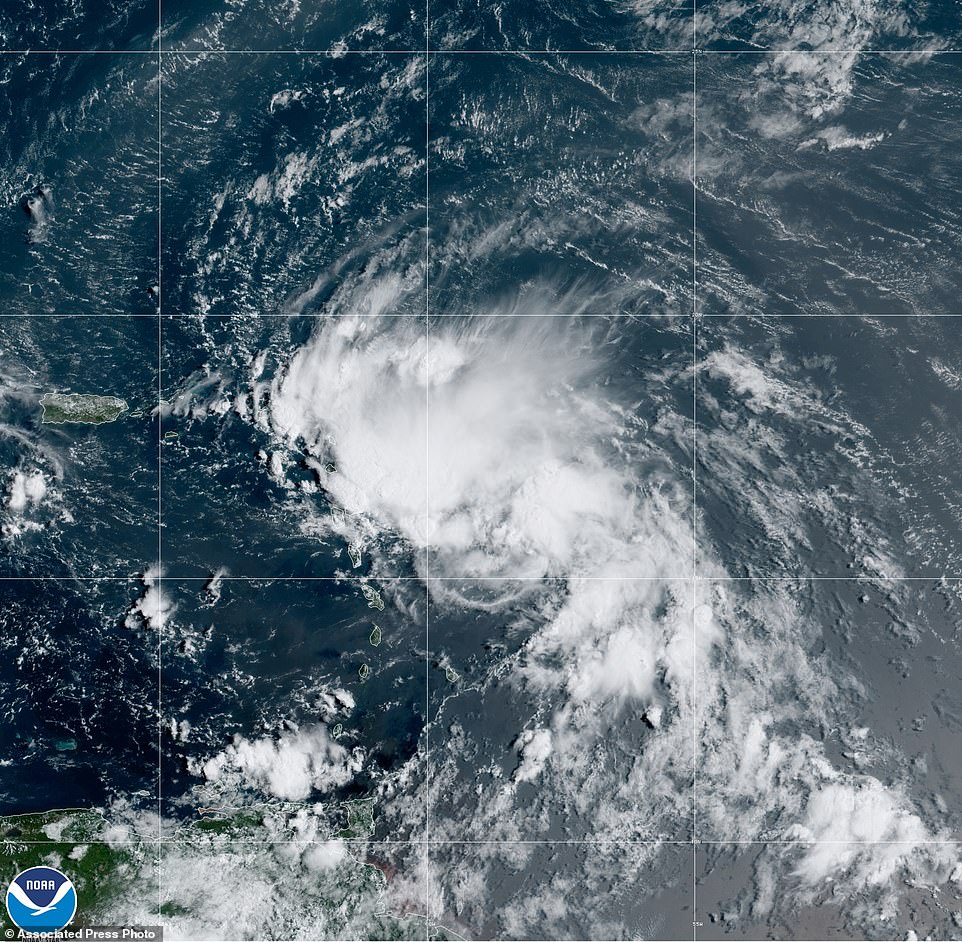 This satellite image released by the National Oceanic and Atmospheric Administration (NOAA) shows Tropical Storm Laura in the North Atlantic Ocean, Friday, Aug. 21, 2020. Laura formed Friday in the eastern Caribbean and forecasters said it poses a potential hurricane threat to Florida and the U.S. Gulf Coast. A second storm also may hit the U.S. after running into Mexico’s Yucatan Peninsula 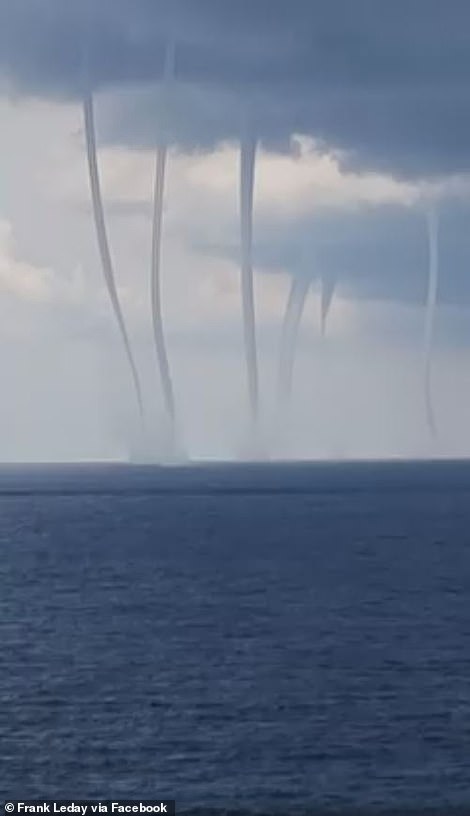 Just the day prior to the storm Laura forming on Friday, six waterspouts swirled simultaneously off the Louisiana coast.

Because the hurricane center slowed Laura’s entrance into the Gulf and moved its track westward, the two storms are now forecast to be together in the Gulf on Tuesday, just before the weaker western storm smacks Texas with Laura making landfall a bit less than a day later.

The hurricane center on Friday issued tropical storm warnings for the northern Leeward Islands and Puerto Rico. Laura was forecast to hit Puerto Rico on Saturday morning, go over or near the Dominican Republic and Haiti late Saturday and Cuba on Sunday. 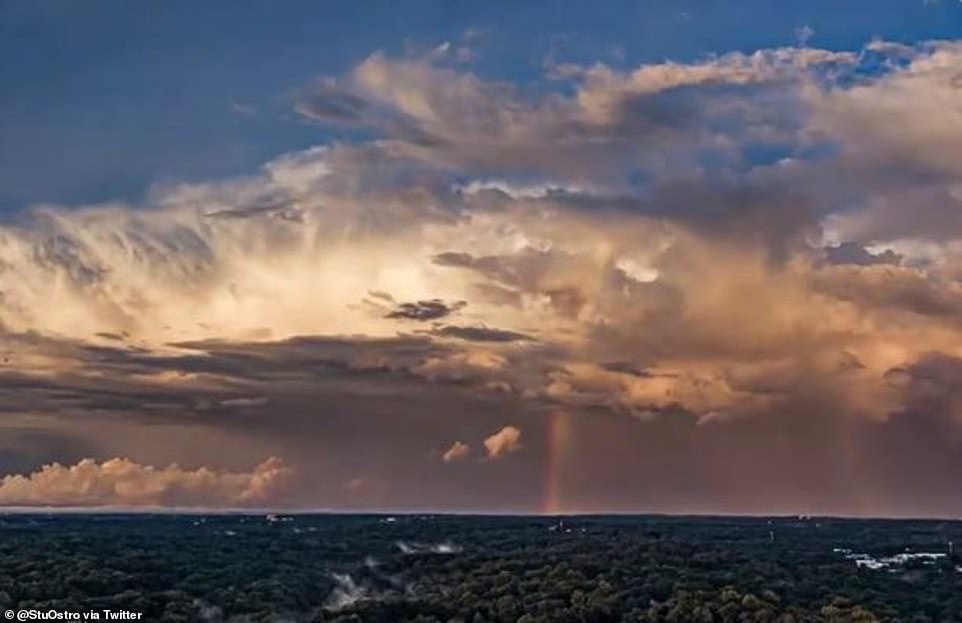 Storm Laura looms on the coast as the sun sets on Friday. The tropical storms Laura and Marco could become almost simultaneous threats to the U.S. Gulf Coast next week 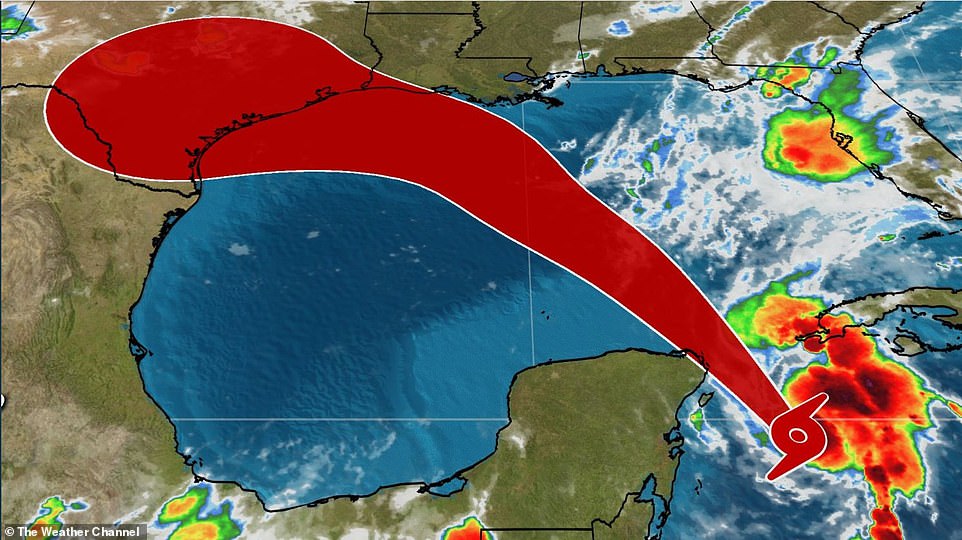 If the two storms make it, they could be crowded in the Gulf of Mexico at the same time Tuesday about 550 miles apart. That would leave open some weird possibilities, including the storms rotating around each other in a tropical two-step, pulling in closer to each other, nudging each other, weakening each other or – far less likely – merging. They are expected to make landfall the next day.

The last time two storms made landfall in the United States within 24 hours of each other was in 1933, Klotzbach said.

It seems fitting for 2020 to have this type of twin threats, said University of Miami hurricane researcher Brian McNoldy.

‘Of course, we have to have two simultaneously land-falling hurricanes,’ McNoldy said. ‘It’s best not to ask what’s next.’

On Friday morning, a hurricane-hunting airplane found Laura’s center to be dozens of miles farther south and better formed than satellite images showed. That triggered a shift in the forecast track, putting Caribbean islands more at risk and an upgrade to tropical storm status. 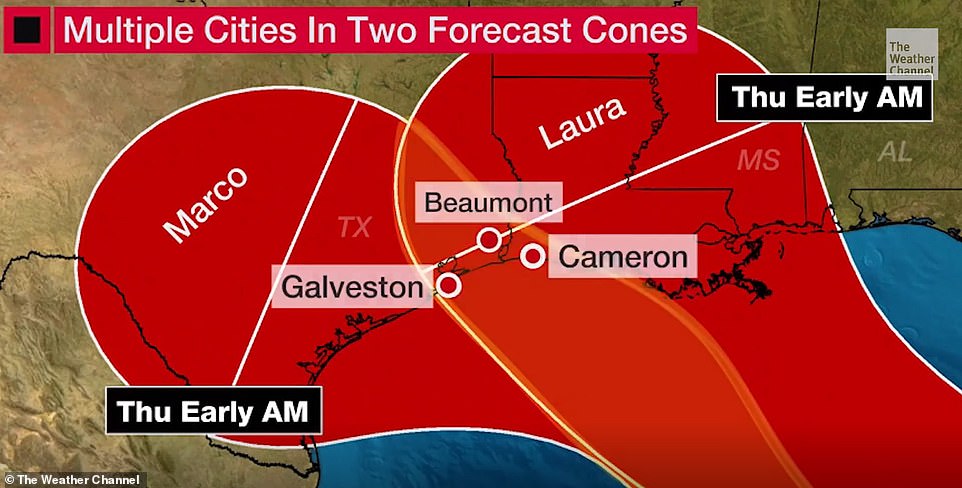 While intense storms battered cities on the Gulf Coast on Thursday, the two systems would not begin forming until Friday 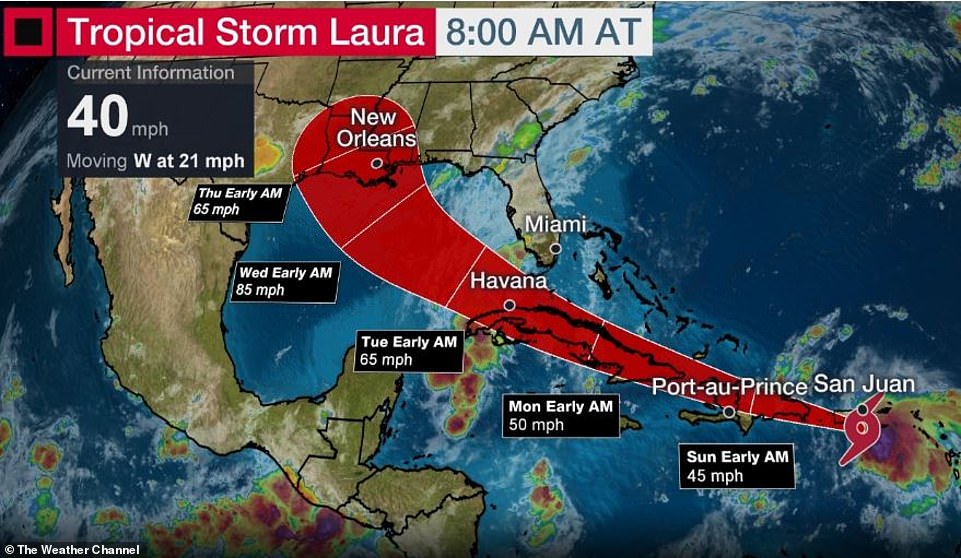 Laura was forecast to hit Puerto Rico on Saturday morning, go near the Dominican Republic and Haiti late Saturday and Cuba on Sunday. It would then hit the U.S.