Western leaders have blamed ‘deliberate’ sabotage after the Nordsteam pipe from Russia suffered ‘unprecedented’ damage off Sweden – causing 3000ft-wide bubbles in the Baltic Sea and causing prices to spike.

Explosions were heard near the Nord Stream 1 and 2 pipes where gas is now leaking into the Baltic from three holes, scientists have confirmed, while chronic safety concerns have led to a five-mile exclusion zone being imposed around the affected area.

Danish Prime Minister Mette Frederiksen has said her government believes the leaks were caused by ‘deliberate actions’, adding that the gas supply pipeline will be out of action for around a week.

She said this evening: ‘It is now the clear assessment by authorities that these are deliberate actions. It was not an accident. There is no information yet to indicate who may be behind this action.’

Her Energy Minister Dan Jorgensen also said the size of the holes in the pipelines indicate that the leaks could not have been caused by an accident such as getting hit by an anchor. The damaged pipelines are at a depth of 70-90 meters below sea level, he added.

The remarks were backed by Sweden’s PM Magdalena Andersson, who has said informations suggests the blasts were likely sabotage.

She said her government was in close contact with partners such as Nato and neighbours such as Denmark and Germany concerning the developments.

Ms Andersson continued: ‘We have Swedish intelligence, but we have also received information in our contacts with Denmark, and based on this concluded that this is probably a deliberate act. It is probably a matter of sabotage.

‘It is not a matter of an attack on Swedish or Danish territory. But that said, the government is taking what happened very seriously, not the least in light of the current security situation on our close proximity.’

Investigations are ongoing into major leaks in Russian pipelines that are now spewing gas into the Baltic Sea near Sweden and Denmark, including assessing evidence of possible sabotage.

It comes after Kyiv’s presidential advisor Mikhaylo Podolyak said on Twitter: ‘The large-scale gas leak is nothing more than a terrorist attack planned by Russia and an act of aggression towards the EU.’

Podolyak accused Russia of seeking to ‘destabilise the economic situation in Europe and cause pre-winter panic’.

While it may not be in Russia’s long-term economic interests to destroy one of its key potential money earners, the destructive act could create economic panic in Europe in the short term.

The leaks, which emerged on Monday and are expected to last several days, raised concerns over environmental damage. They caused a spike in the price of natural resources – a possible Russian motivation for sabotage.

Initially they were assumed to have been accidental, but opinions rapidly changed yesterday with several governments stating that three separate leaks happening almost simultaneously was beyond coincidence.

In Moscow, the Kremlin said it did not rule out sabotage as a reason for the damage to the Russian-built network, which has not been supplying any gas to Germany in recent months.

Spokesman Dmitry Peskov said: ‘This is very concerning news. No option can be ruled out right now.’ But European neighbours said that the sabotage was carried out by Russia itself – even though it would be hugely damaging in economic terms,

It comes after shocking footage released earlier today by the Danish military from a flyover of the affected region showed huge swathes of the sea near the Danish island of Bornholm churning as the gas bubbled to the surface.

A military statement claimed that the largest leak ‘is spreading bubbles a good kilometre (3,280ft) in diameter. The smallest is creating a circle about 200 metres (656 feet) in diameter’, while the head of Denmark’s Energy Agency said it could take up to a week for gas to stop draining into the sea.

‘The sea surface is full of methane, which means there is an increased risk of explosions in the area,’ Kristoffer Bottzauw said, adding that ships could lose buoyancy if the entered the affected region. 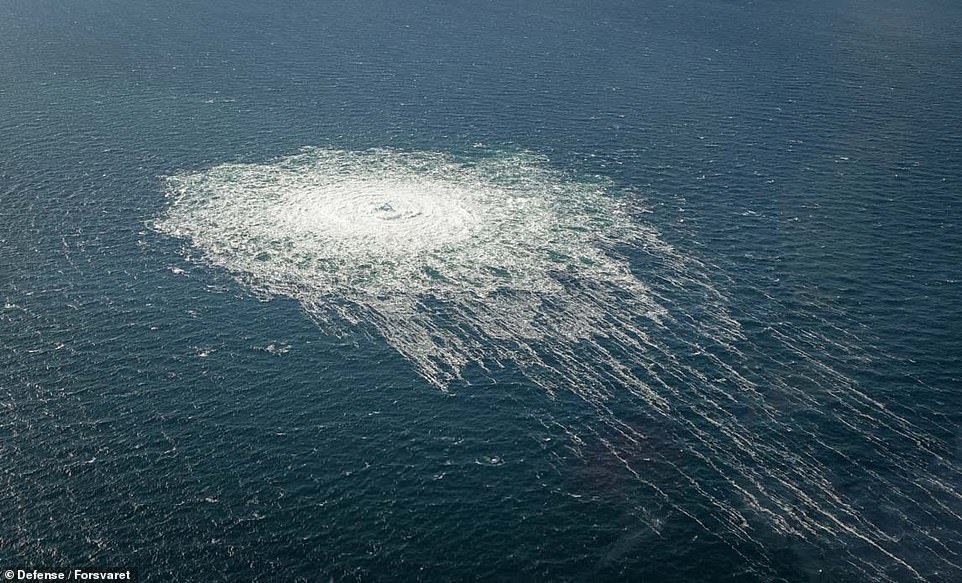 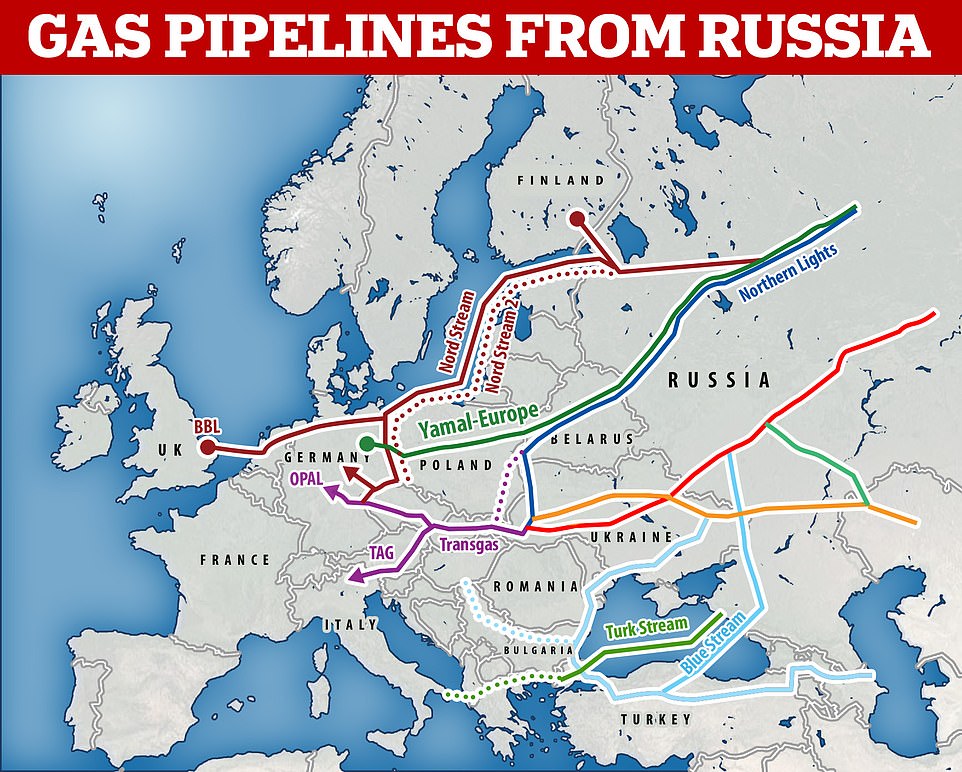 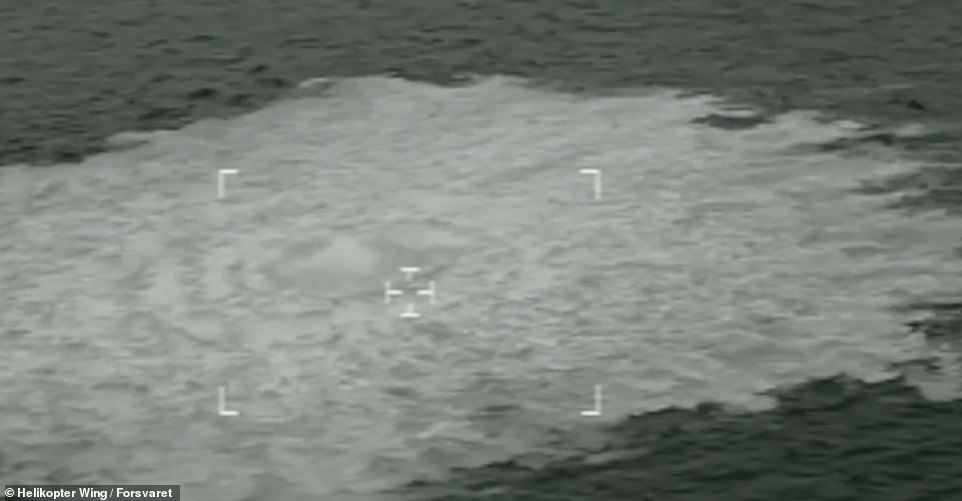 What would be the reason to blow up your own pipeline??