It has been revealed in the last few days that a “stand down” order was given to a rescue team that could have  responded almost immediately to the shooter running amok at the Washington Navy  Yard more than a week ago.

In an interview with Jake Tapper of CNN, Rep.  Michael McCaul, R-Texas, said his information came from a member of the  rescue team.

Ultimately, authorities said, 34-year-old Aaron Alexis was shot and killed by  police after he allegedly shot two dozen people at his place of work, killing  12.

The  Atlantic Wire and other outlets reported several days after the attack that  there was a “tactical unit of heavily armed Capitol police” near the scene “as  it happened, ready and capable of stepping in.”

But multiple sources, according to the report, said the unit was ordered to  stand down.

The Wire report said the officers were part of a four-person Containment and  Emergency Response Team with routine responsibilities of guarding the Capitol.  But they were wearing full tactical gear and armed with assault weapons, the  report said

They arrived on the scene of an active shooting but were told, according to  initial reports by BBC News, “to leave the scene.”

Corsi, whose new book has overtaken O’Reilly’s on the Amazon list of top  sellers about JFK, argues O’Reilly fails to take into account the extensive  documentation produced over the last 50 years indicating Oswald was an agent of  the federal government with an extensive CIA intelligence file that stretched  back to 1957.

Jerome Corsi, in his book, presents evidence that Oswald was a double agent in the “false defector program” in which the U.S. government encouraged military troops  loyal to the United States to engage in a ruse in which they would defect to the  Soviet Union to gain access to the inside operations of the KGB.

Secret  details of JFK’s assassination are finally unlocked. Get your autographed copy  of “Who Really Killed Kennedy?” by Jerome Corsi now!

O’Reilly also does not mention the evidence that Oswald was being paid by the  FBI as an informant in November 1963, prior to the assassination. Corsi says the  Warren Commission suppressed the information, concluding Oswald had no  affiliation with U.S. intelligence agencies.

Corsi asks: “Was Bill O’Reilly simply unaware of this documentary evidence  when he co-authored ‘Killing Kennedy’?”

“Who Really Killed Kennedy,” released last week as the 50th anniversary of  the assassination approaches, is bolstered by recently declassified documents  that shed new light on the greatest “who-done-it” mystery of the 20th century.  Corsi sorted through tens of thousands of documents, all 26 volumes of the  Warren Commission’s report, hundreds of books, several films and countless  photographs.

JFK’s Security
Abraham Bolden (the first black man to serve on the presidential detail – at JFK’s personal request  – and who successfully thwarted a plot to assassinate Kennedy in Chicago on Nov. 2, 1963) has come forward to tell his story in a new book “The Echo From Dealey Plaza“, (published 2008)

As we discovered that fateful day in Dallas, not every agent on President Kennedy’s detail was as loyal to that sacred oath as Abraham Bolden – a fact that President Kennedy himself was apparently aware of.

“Keep those Ivy League charlatans off the back of my car.”

(as reported in William Manchester’s Death of a President) 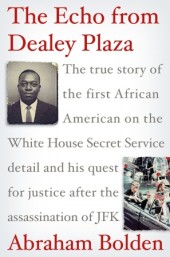 Although JFK showed him special kindness, Bolden couldn’t wait to get back to Chicago and his family, and turned down any permanent Washington post.

Later, when Kennedy was assassinated, Bolden’s warnings to his superiors became a threat to the agency. He doesn’t believe his presence in Dallas would have prevented the slaying. But the Secret Service dropped the ball after learning of assassination plots in Chicago and Miami that might have led to beefed-up security in Dallas, he says.

“If I had stayed there [with Kennedy], my very life would have been in danger,” he says. “After my run-in with [senior agent] Harvey Henderson where he denigrated my race . . . we all carried guns, and accidents do happen — and yes, you could put ‘accidents’ in quotes.”

The documents on the JFK assassination released by the federal government in  the past few years show the CIA had an intelligence file on Oswald.

The  Mary Ferrell Foundation has made public 50,000 pages of documents from Oswald’s  CIA file, including a small selection of the pre-assassination file,  followed by a huge collection of post-assassination documents pertaining to the  Warren Commission and other subsequent investigations of the JFK  assassination.

The pre-assassination part of Oswald’s 201 CIA file shows the CIA followed,  step by step, every move Oswald made to return to the United States after “defecting” to the Soviet Union, says Corsi.

As early as October 1960, while the presidential campaign between Nixon and  Kennedy was still going on, the Department of State undertook a project to  identify and research all Americans who had defected to the Soviet Union, to  Soviet bloc nations or to communist China.

According to former military intelligence officer John Newman in his 1995  book “Oswald and the CIA,” Bannerman said the opening of Oswald’s “201 file” regarding his defection to the Soviet Union “would have all gone through  Angleton.” The 201 opening was something on which “we worked very closely with  Angleton and his staff,” Bannerman recalled.

Oswald and the FBI

“As remarkable as it seems, the evidence suggests Lee Harvey Oswald prior to  the assassination was on the payroll of the FBI,” says Corsi.

J. Lee Rankin, the general counsel of the Warren Commission, wrote a memo to  the file in January 1964 documenting that a reliable source informed him of  journalists in Texas who commonly knew Oswald was receiving a monthly check of  $200 from the FBI.

On December 19, Mr. Hudkins advised that he had just returned from a weekend  in Dallas, during which time he talked to Allen Sweatt, Chief Criminal Division,  Sheriff’s Office, Dallas. Chief Sweatt mentioned that it was his opinion that  Lee Harvey Oswald was being paid $200 a month by the FBI as an informant in  connection with their subversive investigation. He furnished the alleged  informant number assigned to Oswald by the FBI as “S172.”

Rankin, says Corsi, further affirmed that District Attorney Wade in Dallas  and “others of the Texas representatives” stated the rumors that Oswald was an  undercover agent were widely held among members of the press in Dallas and that  Melvin Belli, attorney for Jack Ruby, was aware of the allegations.

Wade further told Rankin that Oswald was an informant for the CIA, carrying  No. 110669.

As  documented by the proceedings of the Warren Commission’s executive session Jan.  27, 1964, another document archived online by the Mary Ferrell Foundation,  Rankin presented to the commissioners the allegations of Oswald’s connections to  the FBI and the CIA.

At  that meeting, Rankin made clear his intention to cover up the information  when he told the commission, “We do have a dirty rumor that is very bad for the  commission, and it is very damaging to the agencies that are involved in it, and  it must be wiped out so insofar as it is possible to do so by this  commission.”

At the Warren Commission’s executive session on Jan. 27, 1964, commissioner  Allen Dulles commented in concluding the discussion of the information Oswald  was a paid FBI agent: “I think this record ought to be destroyed. Do you think  we need a record of this?”

Corsi says the evidence shows Oswald was a patriotic U.S. citizen who earned  his employment as a well-trained intelligence operative, with his primary  allegiance to the CIA. It could be, Corsi concludes, “a key part of the deep  secret the CIA could not afford the U.S. public to know in the aftermath of the  JFK assassination

Oh, and the chilling thing that these two men, Alexis and Oswald have in common?

Yes… both were supposed assassins, but in both instances the available Security teams are asked to stand down. And both were shot dead before they could be brought to trial!