Hurricane Irma has crashed into Donald Trump’s Caribbean estate and now appears to be heading toward his properties in Florida.

The storm crashed against the island of St Martin where Mr Trump owns a waterfront estate.

The winds reportedly wrecked buildings, uprooted trees and overturned cars in the region.

French officials who control the side of the island where Mr Trump’s property is located said the area “suffered serious damage” but did not detail the exact condition of Mr Trump’s estate, The Washington Post reported.

“We know that the four most solid buildings on the island have been destroyed, which means that more rustic structures have probably been completely or partially destroyed,” French Interior Minister Gerard Collomb told AFP.

Mr Trump’s property is currently on the market for $16.9 million (£12.96 million) and covers almost five acres with a pool and a fitness centre.

Trump also owns three golf courses in Miami-Dade and Palm Beach counties, as well as an 11-bedroom mansion on the French side of the Carribean island of St. Martin.

Widespread devastation was reported on St. Martin after Irma swept through. Authorities on Wednesday said at least four people were killed and 50 injured. The hurricane destroyed 95 percent of buildings on the island, according to AFP. 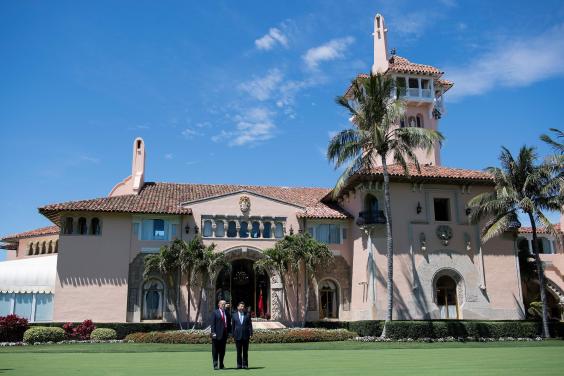 It is, however, too soon for forecasters to accurately predict the direct path of the hurricane, but all the (Trump’s) properties are likely to face some repercussions from Irma.

Amanda Miller, a spokeswoman for the Trump Organisation, said company officials were monitoring the situation.

“All of the proper precautions and protections have been implemented and right now we are just praying for all those in the path of Hurricane Irma in the Caribbean and beyond,” Ms Miller said in a statement.

While President Trump may be chosen of God at this time, nevertheless he has stirred up a hornet’s nest with the recent visit by Jared Kushner his son-in-law to Israel, which has brought these catastrophic Hurricane’s Harvey and Irma.