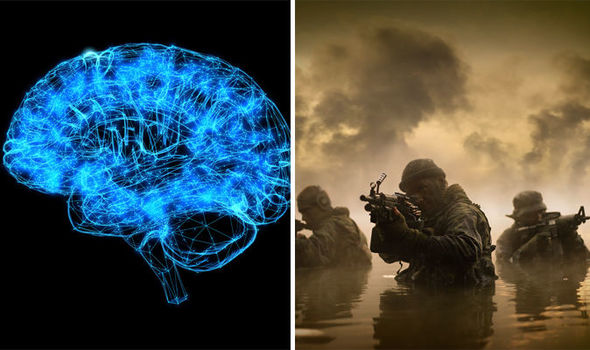 THE US military is creating a generation of SUPER SOLDIERS which have been genetically modified and given technological implants.

DARPA (Defense Advanced Research Projects Agency), which is part of the US Department of Defense has revealed a plethora of plans to create an elite fighting force.

One of the projects is to create software which could be uploaded directly to the brain to give their soldiers heightened senses while also attempting to cure ailments such as blindness, paralysis and speech disorders creating an army of Captain Americas.

DARPA is working on a host of impressive projects which could lead to super-human abilities.

DARPA will spend around $70million into researching the role neural networks play in operating the brains in order to decipher how it processes sensory input.

They will then hopefully create technologies and algorithms which can interpret and generate signals in the brain.

A statement from DARPA said the programme, known as the Neural Engineering System Design (NESD), “aims to develop an implantable neural interface able to provide advanced signal resolution and data-transfer bandwidth between the brain and electronics”.

The implant will act as a translator, converting digital communication like binary code into an electrochemical language used by the brain.

Another project boffins at DARPA are working on is the ability to give super-human sight to its soldiers.The Soldier Centric Imaging via Computational Cameras (SCENICC) program is attempting to create a small contact lens which would improve fighters vision tenfold.Research began on this project in 2011, and DARPA hopes to “develop novel computational imaging capabilities and explore joint design of hardware and software to give war fighters access to systems that greatly enhance their awareness, security and survivability.” 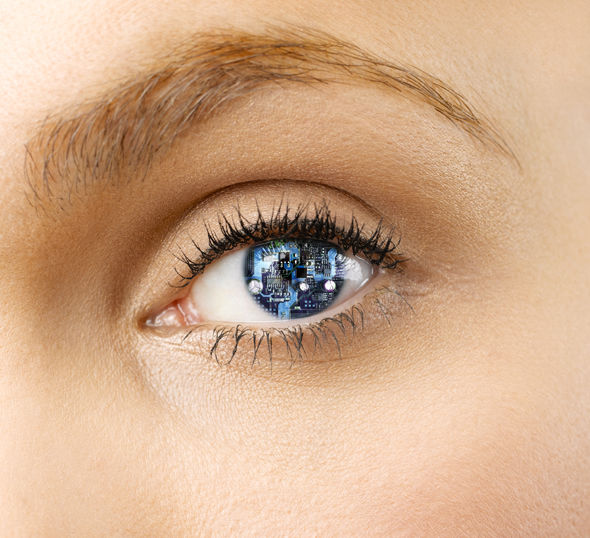 DARPA is also working on technologies outside of the body to make their soldiers stronger and faster, such as the XOS range.The XOS 2 is an exoskeleton, that is currently being developed in conjunction with UK technology firm Raytheon, that soldiers will one day be able to wear and make them 17 times stronger.Raytheon VP of operations Fraser Smith told Time: “This got started mostly because of the need that the military has for lightening the soldiers’ load.

By 2001, DARPA had unveiled two exoskeleton programs, and by 2013, in partnership with U.S. Special Operations Command, DARPA had started work on a super-soldier suit called TALOS (Tactical Assault Light Operator Suit) unlike anything in the history of warfare.

“Soldiers having no physical, physiological, or cognitive limitation will be key to survival and operational dominance in the future.”

Engineered with full-body ballistics protection; integrated heating and cooling systems; embedded sensors, antennas, and computers; 3D audio (to indicate where a fellow warfighter is by the sound of his voice); optics for vision in various light conditions; life-saving oxygen and hemorrhage controls; and more, TALOS is strikingly close to the futuristic exoskeleton that Gorman first envisioned for DARPA 25 years ago, and aims to be “fully functional” by 2018. “I am here to announce that we are building Iron Man,” President Barack Obama said of the suit during a manufacturing innovation event in 2014. When the president said, “This has been a secret project we’ve been working on for a long time,” he wasn’t kidding. 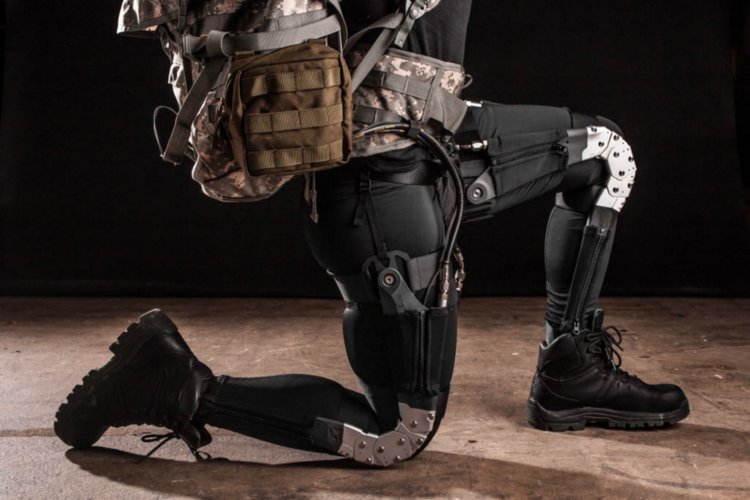 Developments are underway in;

The rumors about American giants from US army base in South Korea is just confirmed,  thanks to this incredible footage obtain by Igor Kryan. Military Humvee height is over 6 feet or almost 2 meters. If you install 4 feet or over 1 meter tall HMG on Humvee roof or .50 caliber Heavy Machine Gun like you are seeing here the total height of vehicle would be almost 10 feet or over 3 meters.

This soldier towering above other soldiers and 10 feet Humvee with HMG on top making his height close to 12 Feet or 4 Meters tall also making him real Nephilim giant.

The military intelligence insider said they secretly created those Nephilim soldiers in this lab and brought them to South Korea to intimidate North.

Average height of North Korean solider is only slightly above 5 feet or 1.5 meters, and US military intelligence is trying to scare them out with 12 Feet 4 meters giants.

The current Permanent Representative of the Syrian Arab Republic to the United Nations Headquarters in New York City, Bashar Jaafari, back on December 19, 2016 stated that there are “genetically modified armed Syrian opposition” or “moderates.” No one is taking into the damage they are causing

VLADIMIR PUTIN has said that the development of genetically-modified soldiers is the next phase of military combat – and one worse than nuclear bombs.

Defense Secretary James Mattis told reporters on Friday  29 Dec 2017 that ISIS in 2018 will be seen as a “brand” for terrorists but insisted the group has lost its luster and still needs to be hunted down.

Special forces have increasingly been used by Washington for counter-terrorism operations in Africa and elsewhere, and the number of casualties has been growing too.

At the same time, Mattis said U.S. forces in Iraq and Syria would shift their focus in 2018 from largely offensive missions to a stabilizing role that supports rebuilding in the war-torn region.

The secretary’s remarks underscore that the Trump administration has no immediate plans to remove U.S. troops from Syria despite pressure from the Russians to do just that.

“We sit here today at the end of 2017, the caliphate is on the run, we’re breaking them,” said Mattis.

The U.S.-led coalition reported Friday that, from Dec. 22 to Thursday, it had conducted 46 strikes against ISIS militants in Iraq and Syria. They included the coalition attacks Wednesday in Syria that destroyed ISIS vehicles, weapons as well as communications and logistics facilities and strikes this week in Iraq that destroyed ISIS caves, tunnels and other shelters.

Mattis conceded some terrorists escaped Raqqa — the Islamic State’s self-declared capital — after the city was liberated this year and are now being hunted down.

“Some people escaped,” said the retired four-star Marine Corps general. “That’s what happens in war. They moved, clearly, into the Middle Euphrates River Valley. We are in the process of crushing the life out of the caliphate there, while trying to keep the innocent people safe, which is very hard with this group.”

Even so, fewer than 1,000 fighters from the Islamic State are believed to still be in Iraq and Syria, well below the roughly 3,000 estimated about three weeks ago, Reuters reported this week.

Mattis also was asked about the threats ISIS poses in 2018 across the globe and called it “a brand threat, I think, more than anything else, that can inspire lone-wolf attacks. It can inspire other groups.”

Nonetheless, ISIS still poses a threat as it can continue to use social media to recruit followers that want to do harm, according to Mattis.

“The appeal is still there for people who are attracted to the sort of thing they stand for,” he said.

The U.S. is still believed to have around 2,000 troops in Syria.

Russian President Vladimir Putin earlier this month announced plans to withdraw ‘significant” troops from Syria, although indicated Moscow would keep bases it has in the country.

Meantime, the Russians have put pressure on the U.S. to withdraw its forces from Syria, claiming ISIS is defeated and American presence not needed.

Yet Mattis gave no indication that U.S. troops would leave any time soon.

Going on for some years, shrouded in secrecy, these mutants will make future wars totally different games.

The genetic modification of specific human genes will give these soldiers certain characteristics advantageous on the battlefield, giving rise to the most amazing abilities and performances.

Smarter, sharper, more focussed and more physically stronger than their enemy counterparts these soldiers will be capable of telepathy, run faster than Olympic champions, lift up record-breaking weights through the development of exoskeletons, re-grow limbs lost in combat, possess a super-strong immune system, go for days and days without food or sleep.

Then there’s the emotional side. These soldiers will have the empathy genes deleted and show no mercy, while devoid of fear.

All this has been revealed, even in mainstream media. In spite of the secrecy fiction writer Simon Conway was allowed into the Pentagon’s DARPA and given a guided tour.

Doesn’t this suggest that DARPA are well into the final stages and they want us to get use to the idea of a genetically modified super soldier army?

2 thoughts on “Has the USA Stationed Super Soldiers in Syria?”