Special counsel Robert Mueller on Wednesday broke more than two years of silence about his investigation into Russian interference in the 2016 election and whether President Donald Trump obstructed justice, saying he does not intend to testify to Congress and explaining he did not have the “option” of charging the president with a crime.

Mueller spoke amid demands by congressional Democrats that he testify in public.

He said he would make “a few remarks” but that it was “important that the office’s written work speak for itself.”

“The report is my testimony,” Mueller said.

The special counsel said he was speaking out because his “investigation is complete,” his office is “formally closing” and that he is “resigning from the Department of Justice to return to private life.”

With regard to whether the Trump campaign responded to Russian efforts to influence the election, Mueller said “there was insufficient evidence to charge a broader conspiracy.”

On his investigation into whether there were efforts to obstruct justice, Mueller said, “The matters we investigated were of paramount importance … When the subject of an investigation obstructs that investigation or lies to investigators it strikes at the government’s effort to find the truth and hold wrongdoers accountable.”

With regard to why he did not make a decision about whether the president obstructed justice, Mueller said charging the president with a crime was “not an option we could consider” because of Justice Department policy.

He said “under longstanding department policy a president cannot be charged with a federal crime while he is in office. That is unconstitutional. Even if the charge is kept under seal and hidden from public view, that too is prohibited. The special counsel’s office is part of the Department of Justice and by regulation it was bound by that department policy.”

But he pointedly repeated a key section from his report, saying, “If we had confidence that the president clearly did not commit a crime we would have said so. We did not, however, make a determination as to whether the president did commit a crime.”

“Beyond department policy we were guided by principles of fairness. It would be unfair to potentially accuse somebody of a crime when there can be no court resolution of the actual charge,” the special counsel said. “That is the office’s final position and we will not comment on any other conclusions or hypotheticals about the president.”

However, Mueller also made clear that the “Constitution requires a process other than the criminal justice system to formally accuse a sitting president of wrongdoing,” suggesting that such a decision should be left in the hands of the Congress through impeachment proceedings.

While Mueller did not clear the president of obstruction, shortly after he spoke, Trump tweeted “The case is closed!”

Nothing changes from the Mueller Report. There was insufficient evidence and therefore, in our Country, a person is innocent. The case is closed! Thank you.

“The Special Counsel has completed the investigation, closed his office, and has closed the case,” White House press secretary Sarah Sanders said in a statement. “After two years, the Special Counsel is moving on with his life, and everyone else should do the same,”

But a key congressional Democrat said the matter was far from over.

“Given that Special Counsel Mueller was unable to pursue criminal charges against the President, it falls to Congress to respond to the crimes, lies and other wrongdoing of President Trump – and we will do so. No one, not even the President of the United States, is above the law,” House Judiciary Chairman Rep. Jerry Nadler, D-N.Y., said in a statement.

What does Nadler know, that 2 years of intense investigation hasn’t uncovered. Clearly Mueller is leaving with his tail between his legs, because his report reveals little.

Later, at a brief news conference in New York, Nadler said, “The special counsel did not exonerate the president of committing a crime. The president is lying about the special counsel’s findings.” But about impeachment, Nadler said only, “All options are on the table.” He also did not commit to trying to subpoena Mueller even though he’s said so previously. 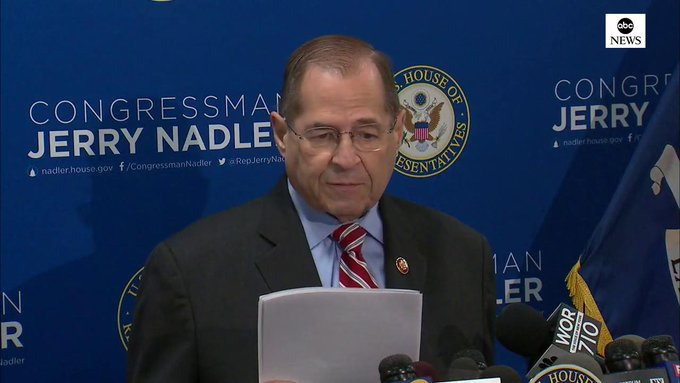 “Mr. Mueller told us a lot of what we need to hear today,” House Judiciary Committee Chairman Jerry Nadler says when asked if he will subpoena Mueller to testify before Congress http://abcn.ws/2I6vBvY

Earlier, House Speaker Nancy Pelosi did not mention impeachment in a statement responding to Mueller, although she made clear that congressional Democrats would continue their investigations.

Except there has been no charges against Obama or Hillary.

“The Special Counsel’s report revealed that the President’s campaign welcomed Russian interference in the election, and laid out eleven instances of the President’s obstruction of the investigation,” she continued. “The Congress holds sacred its constitutional responsibility to investigate and hold the President accountable for his abuse of power.”

At an event Wednesday afternoon, Pelosi did elaborate on the impeachment question, which several Democratic 2020 hopefuls are pressing for, saying “The case has to be very compelling to the American people.” 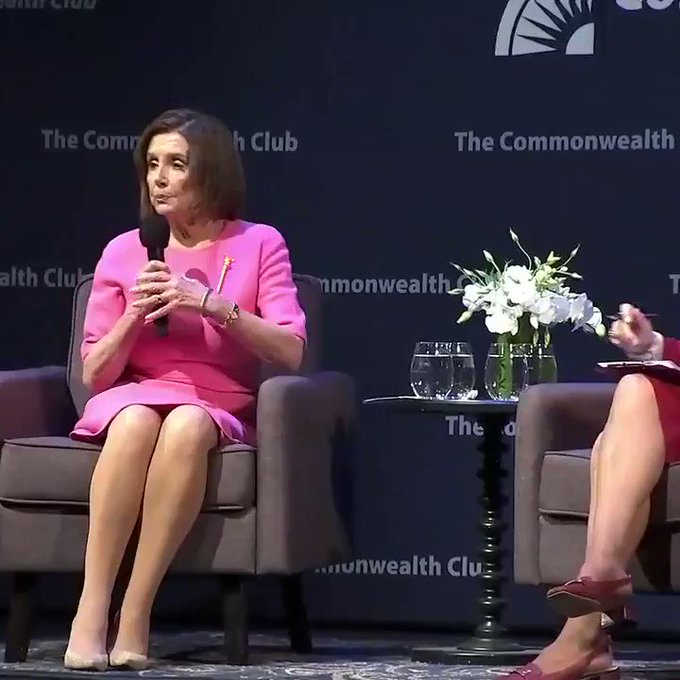 “The case has to be very compelling to the American people.” https://abcn.ws/2I2u5eo

She added that she would still like to see Mueller testify before Congress but is leaving the question of whether he should be subpoenaed to Nadler.

Until now, Mueller has remained silent through the course of his investigation, through the release of his final report on April 18.

The White House was given a heads up that Mueller would be making a statement, sources familiar with the matter told ABC News. However, the sources said the White House was not given any sense as to what he would say.

Mueller’s statement came amid speculation about whether he would agree to publicly testify before Congress about the results of his investigation, and the handling of his findings on potential obstruction of justice by President Trump.

Trump said Friday that he sees no need for Mueller to testify, calling it “ridiculous,” but has said he would leave the decision up to Attorney General William Barr. Barr has told Congress he has no objection to Mueller testifying.

“Now, I hope and expect this to be the only time that I will speak to you in this matter,” Mueller said in his statement. “I am making that decision myself, no one has told me whether I can or should testify or speak further about this matter. There has been discussion about an appearance before Congress. Any testimony from this office would not go beyond our report.”

Sources close to Mueller had told ABC News that he was apprehensive about being made into a political football by members of either party, and that his team had proposed a public statement to the House Judiciary Committee followed by private questioning.

Barr, who has faced criticism for his handling of Mueller’s report and public statements appearing to defend President Trump, is currently on official travel in Alaska.

Barr was also given a heads up on Mueller’s intention to deliver a statement, a source told ABC News. The source would not say when the heads up was given, or whether Barr is aware of the content of what Mueller would say.

While Barr has repeatedly said he has no problem with Mueller testifying publicly about his findings, Trump in recent days has accused Democrats of wanting a “re-do” of his investigation and using his testimony to fuel calls for Trump’s impeachment.

I don’t know why the Radical Left Democrats want Bob Mueller to testify when he just issued a 40 Million Dollar Report that states, loud & clear & for all to hear, No Collusion and No Obstruction (how do you Obstruct a NO crime?) Dems are just looking for trouble and a Do-Over!

“He doesn’t want to be public in what some people will regard as a political spectacle, I think,” Nadler said in an interview last week with MSNBC, confirming reports from ABC News and other outlets about House Democrats pushing back on DOJ’s offer for limited Mueller testimony.

Nadler said “we will subpoena him if we have to” in a May 8 interview on CNN.

(MORE: The Russia probe: A timeline from Moscow to Mueller )

Mueller’s 448- page final report detailed the special counsel’s 22-month long investigation into allegations that the president’s campaign had colluded with Russia. The report said that “the investigation did not establish that the Trump Campaign coordinated with the Russian government in its election interference activities. Mueller declined to make a traditional prosecutorial decision on whether the president had obstructed justice.

(MORE: A Mueller report guide to collusion: What is it and what could we still learn?)

By the conclusion of the investigation, Mueller had indicted 34 people and three Russian businesses, levied charges against six Trump associates and elicited seven guilty pleas.

Mueller ended his statement on Wednesday with words of warning, saying the allegation that of “systematic efforts to interfere in our election… deserves the attention of every American.” 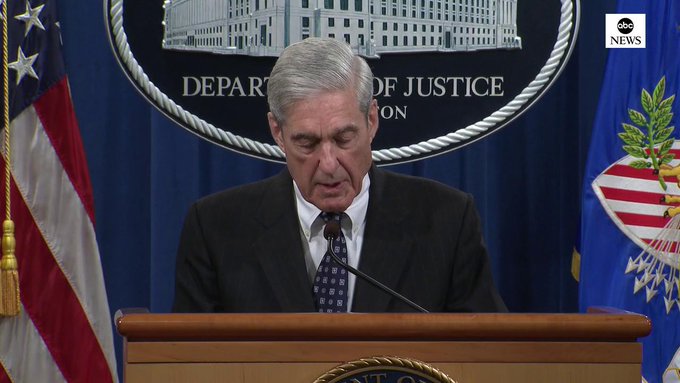 Special counsel Robert Mueller: “I will close by reiterating the central allegation of our indictments — that there were multiple, systematic efforts to interfere in our election and that allegation deserves the attention of every American” http://abcn.ws/2EG2Aq1

Each of them explains in graphic detail the profound criminality and corruption that has followed Mueller throughout his professional career.

MUELLER was installed by his Deep State Masters to Cover Up Real Crimes, Fabricate False Crimes and Protect the Power Elite from Prosecution

MUELLER: A Creature of the Swamp Whose Mission is to Destroy Trump

Special Counsel Mueller: The Elite Fixer and Inside Man for Deep State

MUELLER REPORT: Deep State’s Attempt to Control the Narrative and Coerce the POTUS

Mueller knows that the Alt Media has published hundreds of exposés on his career as a Deep State hitman and cover-up artist.  That he was the FBI’s point-man who covered up the greatest crime on U.S. soil committed on September 11, 2001 has become common knowledge.  Therefore, he knows his days are numbered before he is prosecuted to the fullest extent of the law.  How does anyone willfully cover up the U.S. government sponsored, false flag 9/11 attacks and get away with it?!

FINAL QUESTION: Why has Russia been targeted relentlessly during this DoJ fiasco known as the Mueller Investigation? See: Why the Zio-Anglo-American Axis is so determined to wage war against Russia