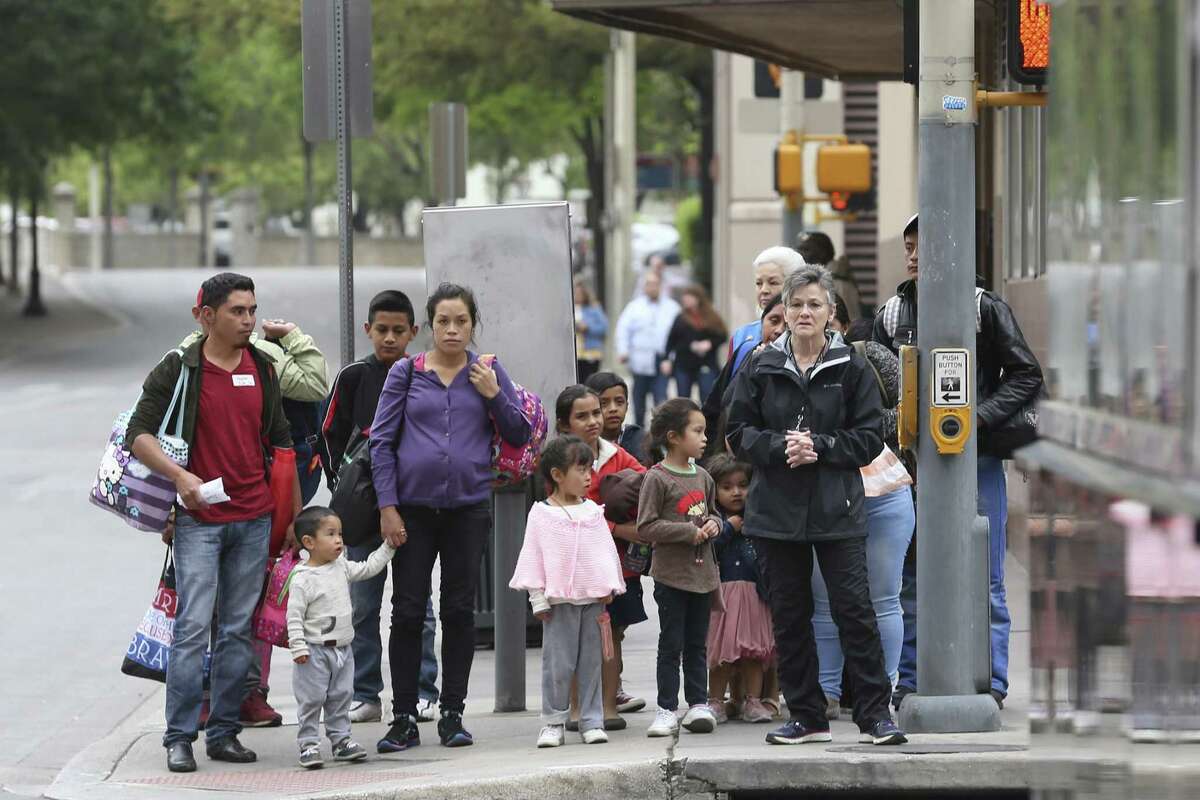 Central American immigrants are led from the Greyhound Bus depot to the City of San Antonio Resource Center, Monday, April 1, 2019. The center provides food and shelter for immigrants waiting to board buses to their final destination. The center is located on city-owned property across the street from the Greyhound Bus depot. –  Photo: Jerry Lara / Staff photographer

SAN ANTONIO, Texas — Roughly 300 Congolese and Angolan citizens who arrived in San Antonio the first week of June after crossing the U.S.-Mexico border days earlier have all briskly departed the city for destinations across the country, some with fuzzy plans based partly on hope.

It’s not just Congolese migrants arriving in alarming numbers. Border Patrol agents reported arresting more than 500 people from Africa since May 30. The group included nationals from Angola, Cameroon, the Republic of the Congo, and the Democratic Republic of the Congo. members and single adults from Central Africa first showed up June 4 at the southern border’s Eagle Pass and Del Rio towns in south-central Texas. The migrants surrendered to Border Patrol agents and claimed asylum after crossing the Rio Grande.

The agency did not, as it is supposed to, turn families over to Immigration and Customs Enforcement. Instead, it released families onto the streets of Eagle Pass and Del Rio, according to two government and non-government officials with first-hand knowledge of the matter.

The African migrants then bought bus tickets to either San Antonio or Austin, according to San Antonio Interim Assistant City Manager Colleen Bridger.

“If — a family, the sponsor — it’s been 24-48 hours and they can’t buy the [bus] ticket, then we’ll buy it,” Elizabeth Nemeth, executive director of Catholic Charities’ west side center, told the Washington Examiner Thursday. For a family of five to seven looking to travel by bus to New York, it will cost $2,000, she said.

While many Central American families who arrive have final destinations and family members in mind who could pay for their tickets and put them up, the African families did not always have quite as clearly defined plans.

If anyone is curious where the Congolese migrants ended up, here is information the city provided me by total families. @KENS5 #kens5eyewitness pic.twitter.com/OeBRGT0ifa

“They come with a place in mind. ‘My friend told me to go to Portland, Maine, because there’s a lot of Congolese families that already live there and it’s welcoming,” said Nemeth. “And they have that plan in mind, right? But they don’t understand the geography — like where it is, how much it costs to get there. There’s a lot of misconceptions. They may think, ‘I have a friend there,’ but they don’t have a friend’s phone number … [We can look into] what is their last name, phone book, call shelter and ask about them, connect the dots. I wouldn’t say that we’re just putting them randomly. They have an idea.”

The African migrants are spending six to seven months traveling to Brazil then up to the U.S. Those entering the U.S. through this route did so because they “were scared the [refugee] process was not gonna work, or that it’s last a standstill,” said Christina Higgs, Catholic Charities spokeswoman for the San Antonio region. Some worried traveling to or through Europe was “getting really dangerous.”

“He used the term, and I hate to say it, but they were trying to hedge their bets by coming his way and see if they couldn’t get here that way,” she added.

Officials from the city and local organizations expect Africans to continue arriving in San Antonio.

It is my contention that this a United Nations plot, partly funded by George Soros, and backed by naive and simple NGOs, and deliberate engagement by the Roman Catholics! The immigrants are given access to all sorts financial support with the high chance of carrying Ebola across the USA. The story reads like a Tom Clancy novel. These immigrants then become like ‘sleeper cells’ carrying a deadly virus through out several communities.