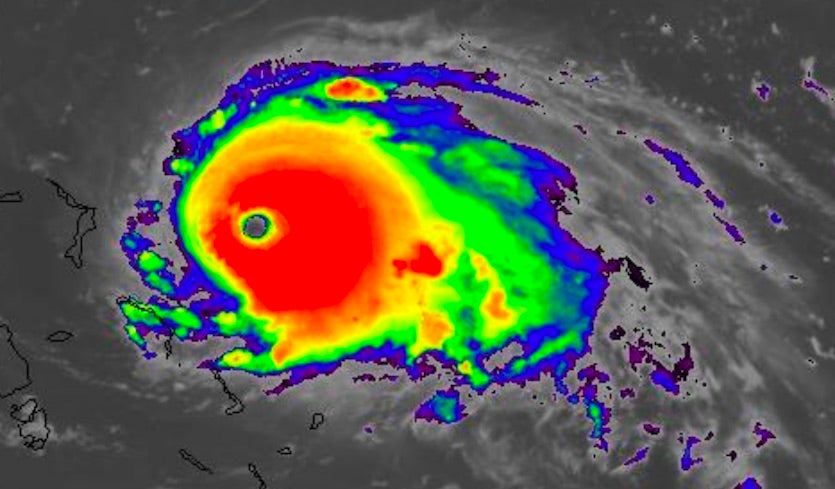 Dorian on the Brink of Category 5 Strength

Hurricane Dorian continued to flex its atmospheric muscles on Saturday night, remaining at the cusp of Category 5 status. Dorian continues to pose an extremely serious threat to the Northwest Bahamas, and it will be approaching the Florida coast by Monday. The latest round of computer models (18Z Saturday and 00Z Sunday) suggest that a direct landfall in Florida, while not the model consensus, can’t yet be ruled out. In any event, Dorian appears set to churn its way along the Southeast U.S. coast for days on end, with the potential for a prolonged round of destructive impacts.

Somewhat surprisingly, the 11 pm EDT advisory from the National Hurricane Center held Dorian’s top sustained winds at 150 mph. SFMR scatterometer data from a Saturday night reconnaissance flight found surface wind estimates approaching 155 knots (178 mph). These data may be questionable, as noted in the 11 pm forecast discussion. Scatterometer readings can sometimes run overly high in shallow seas, and contrary to expectations, flight-level winds have not been stronger than the surface estimates. However, a dropsonde launched at 9:19 pm EDT found surface winds of 155 knots (178 mph) and winds in the lowest 500 feet of the atmosphere averaging 151 knots (170 mph). These are instantaneous wind measurements, so sustained 1-minute winds wouldn’t be quite as strong. It seems likely NHC held Dorian back from Cat 5 status based on the comparatively weak flight-level winds.

Infrared satellite imagery paints a stunning picture of Dorian (see image at top), with an exceptionally sharp eye surrounded by a ring of intense showers and thunderstorms (convection) only slightly skewed toward the east side of the storm.

Dorian’s surface pressure is notably high for a hurricane this intense (940 mb at 11 pm EDT). In part, this is because Dorian remains a medium-small hurricane, so the pressure contrast that’s driving the peak winds is packed into a smaller area.

The 0Z Sunday run of the SHIPS model confirms that Dorian is not an annular hurricane—the type that lack spiral rainbands, giving them the look of a truck tire. However, its banding features are relatively limited, so this could help give it some of the staying power of an annular storm, which tend to be stronger than most hurricanes and tend to weaken more slowly. We can expect strength fluctuations in the next couple of days to be primarily due to any eyewall replacement cycles (ERCs). These cycles can produce a dip in strength lasting a day or so, as the inner eyewall collapses and is replaced by the outer eyewall, but they also tend to enlarge a hurricane, spreading the kinetic energy of the core winds over a larger area.

Dorian poses an extremely serious threat to the northwest Bahamas

Dorian’s movement on Saturday just north of due west has been well forecast by computer models, and there is little sign it will avoid Great Abaco Island, the northernmost large island in The Bahamas, and the other smaller islands that make up the Abacos. Current forecasts suggest that the island (population 17,000) is in for an extended two-day pounding.

The fact that Great Abaco Island is likely to be on the weaker (left) side of the approaching hurricane won’t help it much, since Dorian will be moving so slowly. In a fast-moving landfalling storm coming ashore at 15 mph, the peak winds on the right-front side of the hurricane can be expected to be about 30 mph greater than those on the left-front side. If Dorian is making landfall at just 5 mph, this difference will be more like 10 mph. Thus, the “weak” southern side of Dorian’s eyewall will not be all that weak; the hurricane’s destructive winds will be spread out over a larger area, and not focused in a relatively narrow region in the right-front quadrant.

Grand Bahama Island is also at risk of major and sustained impacts from Dorian. It is possible the storm will angle just to the north of that island, which would put it on Dorian’s weaker left-hand flank.

NHC warns that storm surge could push coastal waters 15 to 20 feet above normal tide levels in areas of onshore winds on the Abaco Islands and Grand Bahama Island.

Will Dorian make landfall the Southeast U.S. coast—and how much does landfall matter?

The 0z, 6Z, and 12Z suite of model runs on Saturday continued their trend from the previous day, advertising an earlier turn to the north for Dorian. This is because of a weaker-than-expected edge of the Bermuda High, which is steering Dorian clockwise around its western flank. None of the operational versions of the top five tracking models used by NHC have showed with their 0Z, 6Z, or 12Z Saturday runs that Dorian might make a direct hit on Florida. However, many of the 70 ensemble members of the GFS and European model did take Dorian over Florida, and most of the east coast of Florida remains in the NHC cone of uncertainty.

The eastward trend became a bit more tentative with the 18Z model runs, several of which (including the GFS) nudged their forecast tracks back toward the west. The 18Z run of the HWRF model brought Dorian inland near Kennedy Space Center on Tuesday night and on into southeast Georgia by Thursday. It’s just one of many possibilities, but a sign that we cannot yet dismiss a destructive landfall on the Southeast U.S. coast.

Remember: If you are in the cone of uncertainty, you are at risk of a direct strike!

Here is the full 18z #IBM MPAS model run hot off the press. This model cycle promotes a scenario of #Dorian landfalling across eastern Florida, similar to what the 18z HWRF promotes. The model brings Dorian up the spine of Florida. I’ll share future updates on this model tomorrow pic.twitter.com/1S5dZwMyJg