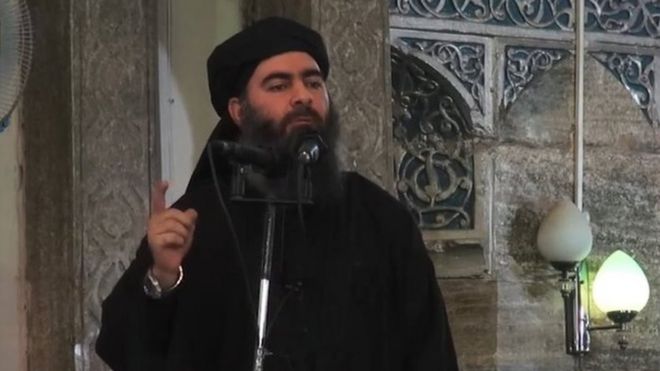 Did Deep State forget that ISIS leader Abu Bakr al-Baghdad died in an Israeli hospital in 2015?

Bibi with his comrade-in-arms Bagdadi

Leader of the ISIL terrorist group Abu Bakr al-Baghdadi has died and members of the Takfiri group in Iraq have already sworn allegiance to Abu Ala Afri as his successor, Arab media reports said on Sunday.

According to two Iraqi news agencies, Alghad Press and Al-Youm Al-Thamen (the 8th Day), as well as sources in the Iraqi city of Mosul, Baghdadi died in an Israeli hospital in the occupied Golan Heights where he had been hospitalized for treatment after sustaining severe injuries during a joint attack of the Iraqi army and popular forces.

The sources added that al-Baghdadi has been declared by his Israeli physicians and surgeons as to be now “clinically dead”.

Al-Youm Al-Thamen quoting intelligence sources said ISIL had earlier recorded several videos of its leader months before the March airstrike and after the first time that he escaped lethal injuries around a year ago to prove that he is alive until the group can introduce a universally accepted new leader.

The sources added that the members of the Takfiri group operating in Iraq have already pledged allegiance to a new leader called Abdul Rahman al-Sheijlar, alias Abu Ala Afri, as Baghdadi’s successor.

There are also unconfirmed reports that internal disputes have erupted and gaps among a number of ISIL factions in Syria and Iraq are widening over the appointment of the new leader, as the ISIL branch fighting Syria has rejected Afri’s leadership and are dithering over Baghdadi’s successor.

The Spanish-language Hispan TV television also released a report on April 25 in which it confirmed the death of the ISIL leader.

A report released by the Guardian on March 21 said Baghdadi suffered serious and “life-threatening” injuries during an attack in March.

The report, of course, added that Baghdadi has survived his wounds.

Baghdadi’s wounding led to urgent meetings of ISIL leaders, who initially believed he would die and made plans to name a new leader.

An Iraqi official confirmed that the strike took place on 18 March in the al-Baaj a district of Nineveh, close to the Syrian border. There had been two previous reports in November and December of Baghdadi being wounded, though neither was accurate.

Hisham al-Hashimi, an Iraqi official who advises Baghdad on ISIL, said, “Yes, he was wounded in al-Baaj near the village of Umm al-Rous on 18 March with a group that was with him.”