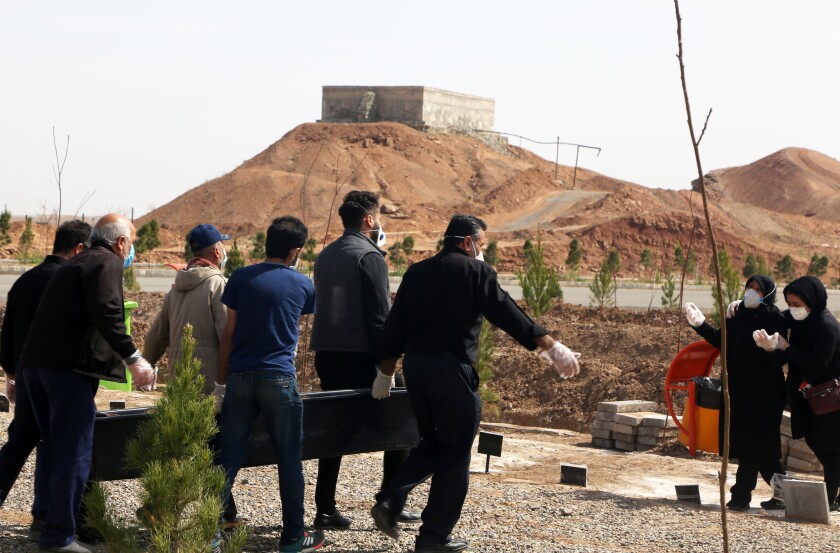 Grieving families are not allowed to enter cemeteries.

Bodies that arrive for burial are not washed as they should be under Islamic custom. Nor are they wrapped in traditional white cloth. They are covered in hospital plastic, marking them as victims — both young and old — of the coronavirus. As their loved ones are lowered into mass graves, uncles, fathers and daughters say their farewells from far away. There are no fresh flowers, only powdered swaths of lime to mask the scent of decay.

Clerics no longer come to pray over the dead. Instead their voices, like distant ghosts, echo from portable speakers.

Battered by the coronavirus, Iran’s religious Shiite-clerics are abandoning Islamic burial rituals to prevent further infections and stem a rapidly rising death toll. Each day hundreds of new people test positive for the virus. But with infections now hovering above 16,000 and the death toll rising to 988, the lines outside cemeteries lengthen even as state TV warns that millions may perish.

New protocols for burying the dead have been issued by the Ministry of Health. Within 24 hours, workers wearing protective gear are to cover and deliver bodies to cemeteries. The dead are not to be washed and only a few family members are allowed to attend the funeral and should stand far away from the grave.

But in recent weeks, religious leaders have given contradictory statements about whether the new rules — which strike at both tradition and faith — should be imposed.

Grand Ayatollah Yousef Sanei in Qom said it is not necessary to follow religious rules if there is a danger of spreading the virus. But Iran’s Supreme Leader Ayatollah Ali Khamenei and Ayatollah Shabiri Zanjani have stated that the bodies should be washed using safety equipment. But the rules, like so much else in Iran, are exasperating.

When Maryam Rahmati learned last week that her mother died from a supposed heart attack in Gonbad Kavus city, she was confused after learning from officials that the family wouldn’t be allowed to bury the body. Since the death certificate stated her mother had passed away because of a heart attack, they had no reason to believe that the cause of death was in fact coronavirus.

So Rahmati’s family struck a deal with the municipality: Authorities would give the body back and allow the family to bury it themselves in exchange for about $2,150.

Such negotiations are often reached in a nation enduring sanctions from abroad and repression at home. The family, unaware of the deception folded into the bargain, agreed.

Rahmati’s aunt cleansed her mother’s body with the help of two cemetery body washers. None wore masks or gloves. After they placed the body in the ground, Rahmati’s brother jumped in and hugged his mother one last time. More than 50 mourners who attended the funeral watched from above.

Now, Rahmati’s family may face greater tragedy. Her four aunts have tested positive for the virus; her father is currently hospitalized and her husband is also infected and self-quarantining at home in Tehran.

“I insisted that all family members go and take lung CT scans,” she said. “They falsified my mother’s death certificate to hide the real numbers and now they caused the virus to spread.”

It is like this these days in Iran; perplexing questions wrapped in sorrow and anger, most of them directed at a government that lost the trust of much of its population years ago. In Iran’s holy city of Qom, the epicenter of the country’s outbreak, some corpses are washed with water and soap by volunteer clerics. Many are then taken and buried in what’s known as the “42nd site” and “Crisis Site” — euphemisms for mass graves. 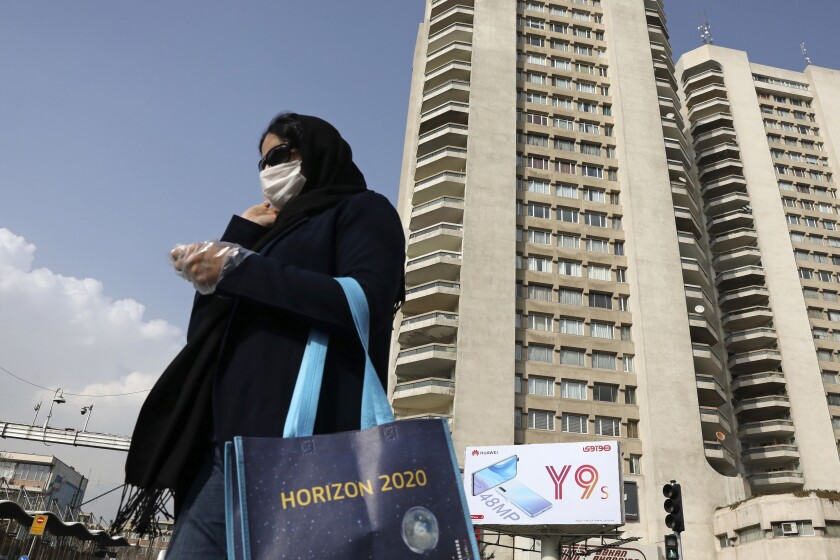 Meysam Behroom, a political science student studying in Qom, said his friend and fellow classmate died from the coronavirus. He said his friend’s son contracted the virus and died soon afterward.

Both were laid to rest in Baqi Cemetery. Families must present the death certificate of a loved one and get permission from the Ministry of Health to enter the cemetery, said Behroom, who attended his friend’s funeral.

The images of the burial site are etched in his mind. Graves were dug deep; they looked like pits and trenches. The cemetery was dusted in lime, rows and rows of it. Some graves had the names of the deceased written on paper, others cardboard, a testament to the suddenness of a novel virus that has swept the world.

Then there are plots of land with no names.

“I think it was a mass grave,” Behroom said.

“In my last visit before my friend’s funeral, half of the cemetery was empty land and the graves were spaced but now it’s completely dug up,” he said.

A special correspondent in Tehran contributed to this story.