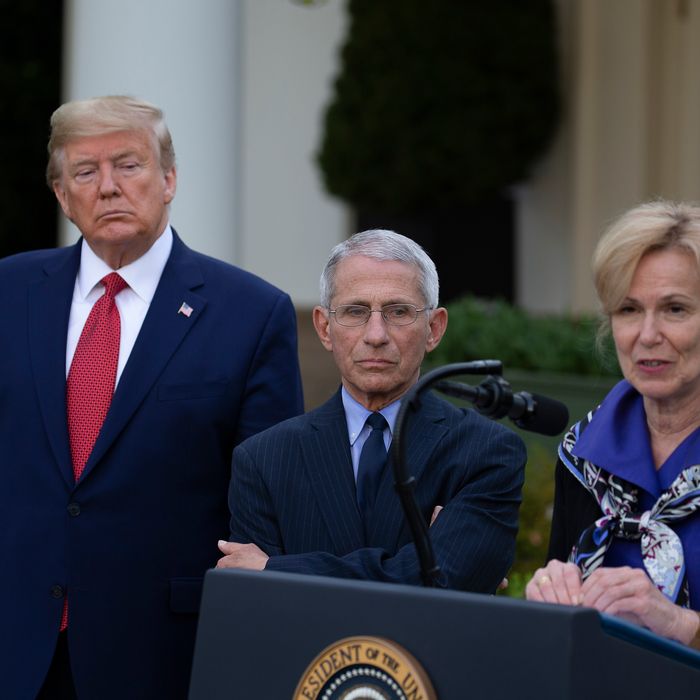 President Trump hasn’t been paying close attention to the advice of his public-health officials. According to the New York Times, Trump is a rare sight at the coronavirus task force meetings that precede the White House daily briefings — which could explain why the president touted injections of disinfectant as a possible coronavirus treatment on Friday.

But according to two reports on Sunday, the most publicly known doctors leading the federal COVID-19 response, Dr. Anthony Fauci and Dr. Deborah Birx, will be sidelined in the coming weeks. The White House confirmed to Axios that the two will stay on “but take a back seat to the forward-looking, ‘what’s next’ message.” Meanwhile, an average of over 2,000 Americans died every day in the past week from the coronavirus.

As part of the pivot — which the White House attempted prematurely in the run-up to Easter — the administration will now highlight “success stories” of businesses reopening, emphasize the performance of governors in states ending their shutdowns, and decrease its reliance on health statistics in the briefings, though accurate information has proved to be an effective tool in fighting the spread of the virus. The Associated Press reports that the marathon sessions may take a different turn, with the White House considering holding “news briefings in a modified form without Trump.” The president — despite his reported enjoyment of the free-form Q&As — gave his opinion on the matter on Saturday, tweeting they were “not worth the time & effort.”

Some form of these changes could aid Trump in several of his election-year pursuits. White House officials have advised the president that his current onscreen approach to the crisis may be hurting his standing among seniors: Recent polling has shown Joe Biden up in swing states and among voters over 65, a key demographic for Trump’s path to reelection. By decreasing his screen time — and avoiding potential repeats of Friday’s disastrous bleach bomb — advisers hope the president may be able to emulate Biden’s low-profile success. (“For the first time, I feel like he gets it that these aren’t helping him,” a source who spoke to Trump on Friday told Axios.) Pivoting to the economy will also put Trump on friendlier territory than his new ventures into public health; the robust economy during the administration’s first three years has been a fall-back rally message.

However, the prioritization of an economy-first response is a clear sign that the administration is prepared to abandon public-health expertise beyond just the onscreen presence of Birx and Fauci. And there may be more shake-ups on the way: The Wall Street Journal and Politico report that White House officials are considering replacing Health and Human Services Secretary Alex Azar.