By JEMMA CARR FOR MAILONLINE

Protests erupted across Europe last night as thousands of angry demonstrators called on their governments to reconsider a second-round of lockdown restrictions.

In Italy, violence was reported in at least two major northern cities, Milan and Turin, as vast crowds protested freedom-limiting restrictions enforced to tackle a second surge in coronavirus cases.

Witnesses said a number of luxury stores, including a Gucci shop, were ransacked in central Turin as crowds of youths took to the streets after nightfall, letting off huge firecrackers and lighting coloured flares.

The city’s mayor today berated the violent protesters who she said had ‘polluted’ a demonstration by bar and restaurant owners who are facing another economic slump.

In Milan at least 28 people were arrested after protesters threw Molotov cocktails at police in the capital of Lombardy, the original epicentre of the virus in Italy which is now seeing a resurgence of cases.

Meanwhile in Barcelona, demonstrators set rubbish bins on fire in the streets – before riot police intervened to bring the chaos to an end.

The demonstrations came just one day after Spain declared a second nationwide state of emergency covering all regions except the Canary Islands.

The new state of emergency will initially last for 15 days but the Government plans to ask parliament for a six-month extension, meaning the restrictions – which include a 11pm to 6am curfew – could be enforced until early May 2021.

Protests erupted across Italy and Spain last night as thousands of angry demonstrators called on their Governments to reconsider a second-round of lockdown restrictions. Vast crowds gathered on the streets of Barcelona with angry protesters setting dustbins on fire (pictured)Anti-lockdown demonstrators destroy front of boutiques in Turin 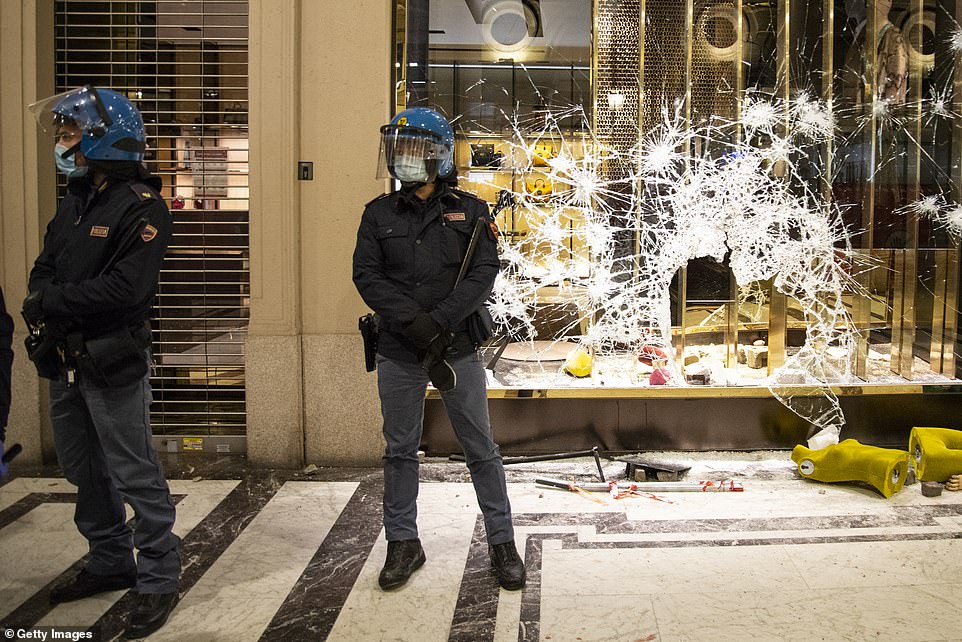 In Turin, witnesses said a number of luxury stores, including a Gucci shop (pictured), were ransacked as crowds of youths took to the streets after nightfall, letting off huge firecrackers and lighting coloured flares 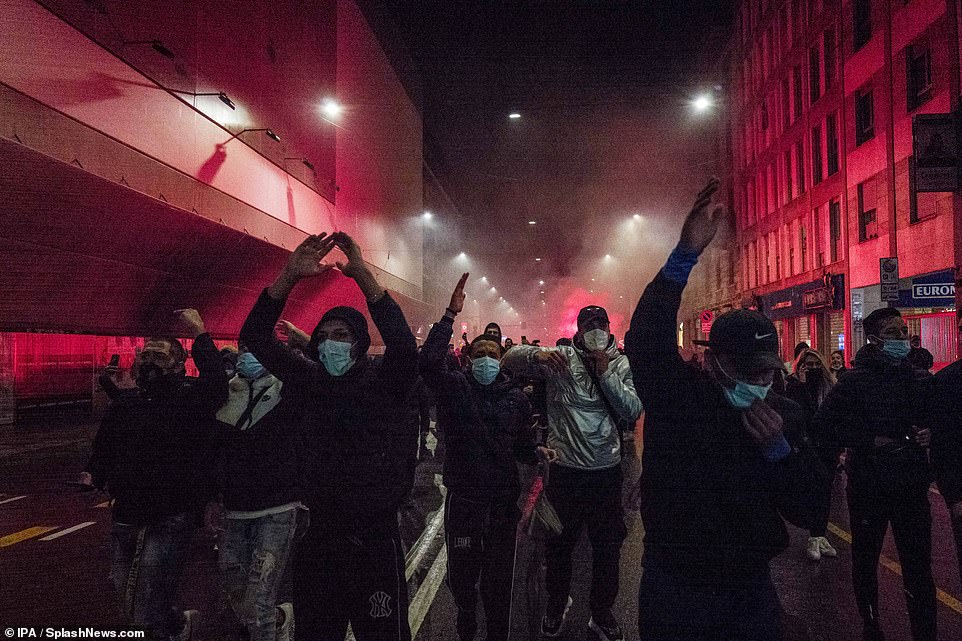 There were also clashes in Milan (pictured), the capital of the neighbouring Lombardy region, an area that has borne the brunt of the Covid-19 epidemic in Italy 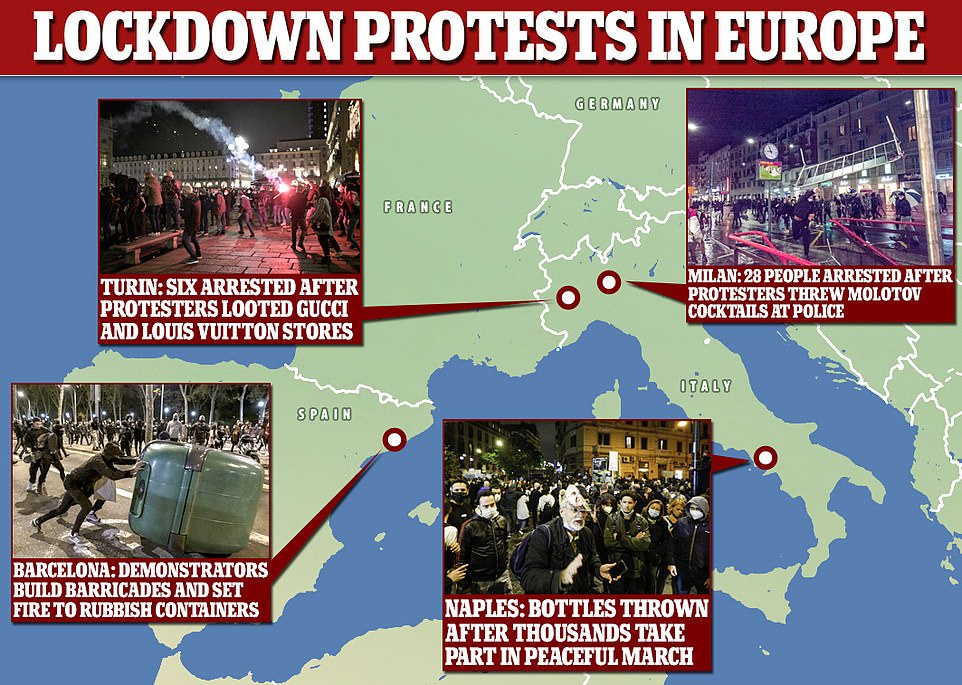 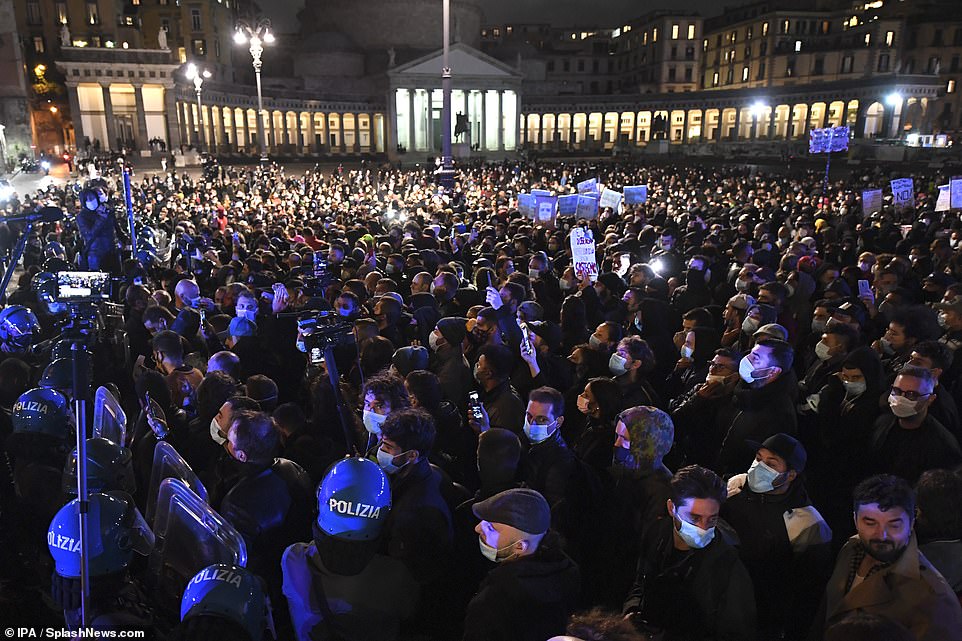 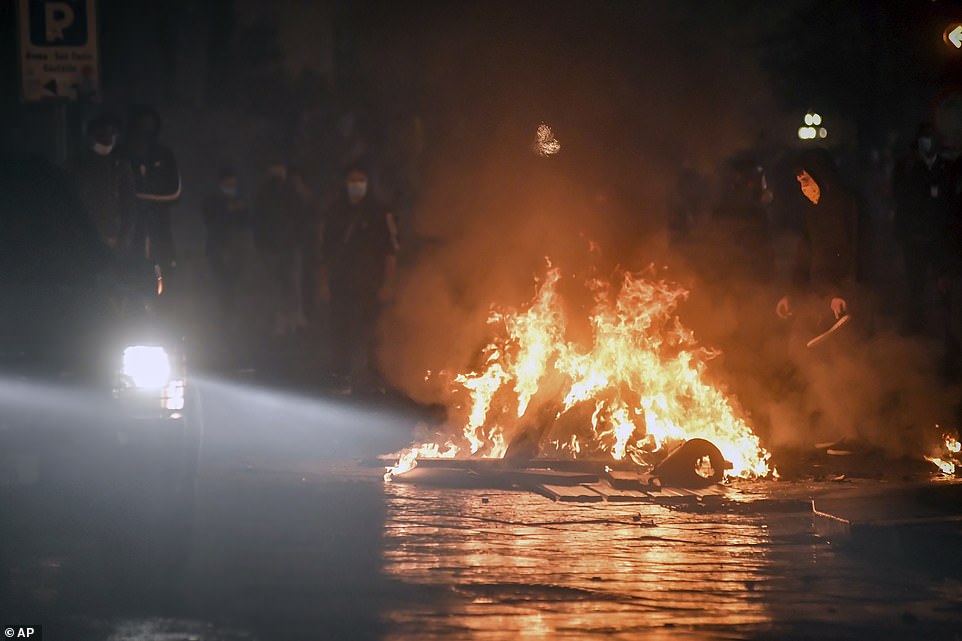 Demonstrators stand by a burning dustbin as clashes broke out during a demonstration in Turin, Italy, on Monday 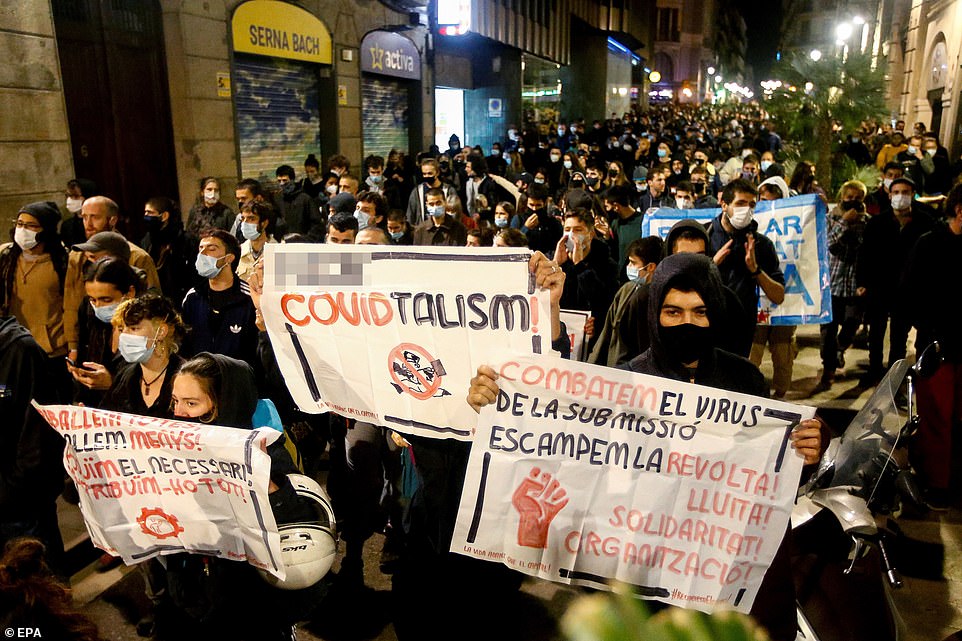 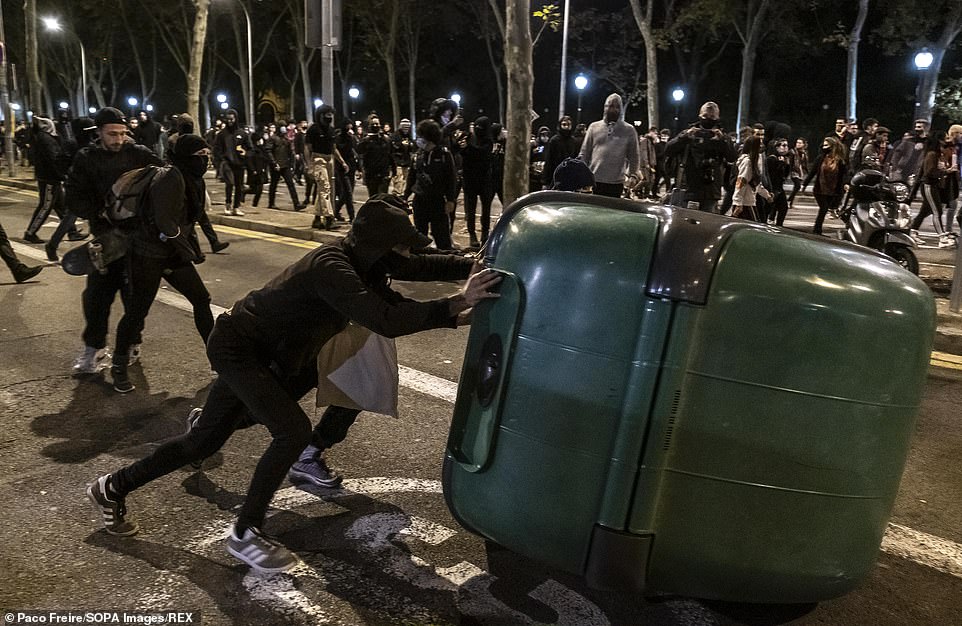 In Barcelona, a group of hooded youths were seen dragging garbage containers to form a barricade on the Passeig di Picasso 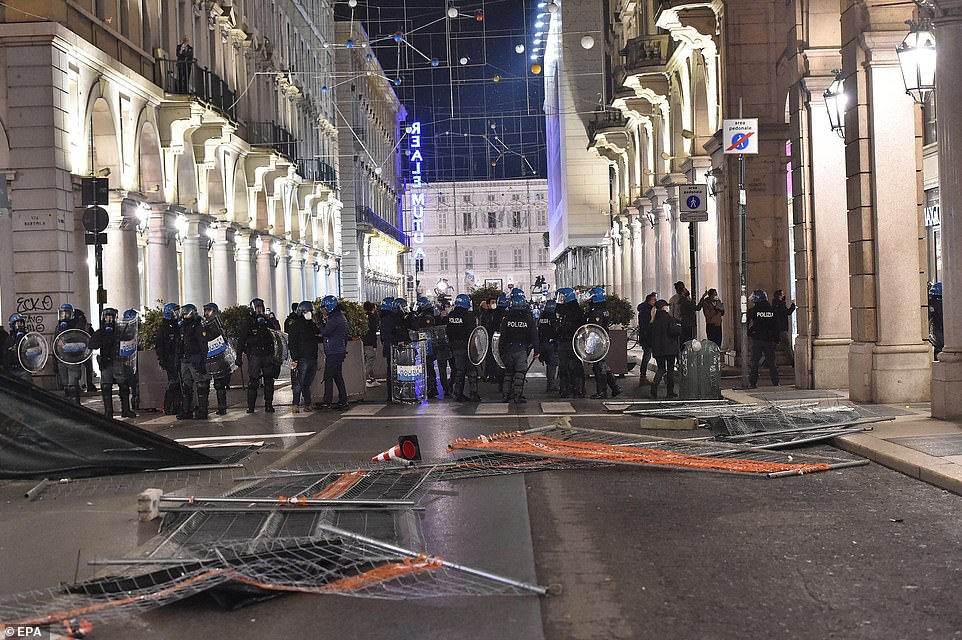 In Turin, police responded with volleys of tear gas as they tried to restore order on Monday night.

There were also clashes in Milan, the capital of the neighbouring Lombardy region, an area that has borne the brunt of the Covid-19 epidemic in Italy.

‘Freedom, freedom, freedom,’ crowds chanted as they confronted police in the city centre – with some shouting conspiracy theories like ‘the coronavirus does not exist’.

Footage showed Molotov cocktails and other projectiles being thrown at a police car during the protests which ended with around a dozen officers being injured and dozens of protesters arrested.

The 28 people arrested in Milan included 13 minors, according to news agency ANSA, while six people were detained for fires and looting in Turin.

One of them was a man allegedly caught setting fire to rubbish bins, who was arrested along with a 17-year-old girl, while two Egyptian nationals were arrested for looting at a Gucci store.

Chiara Appendino, the mayor of Turin, today condemned the ‘criminal actions of the violent people who polluted the peaceful demonstration of traders, entrepreneurs and workers’.

‘These were actions that not only do not belong in any way to the reasons for the protest,’ she said, accusing protesters of committing violent acts ‘on the backs of workers, traders and entrepreneurs who civilised their legitimate dissent last night’.

A further protest is planned tomorrow in city squares across Italy which will see restaurateurs and bartenders rage at the impact that the latest shutdown measures are having on their industry.

As many as 80,000 pizzerias are facing closure, according to HuffPost, with hundreds of thousands of people potentially out of work.

There were also protests in Naples on Monday, were bottles were reportedly thrown after thousands had gathered for a peaceful march.

Italy saw a record 21,268 cases in one day on Sunday – the highest daily figure the country saw during the pandemic – followed by a further 17,012 on Monday. More than 37,400 people have died in total.

The Italian government on Sunday ordered bars and restaurants to close by 6pm and shut public gyms, cinemas and swimming pools to try to slow a second wave of coronavirus infections that is battering much of the country. 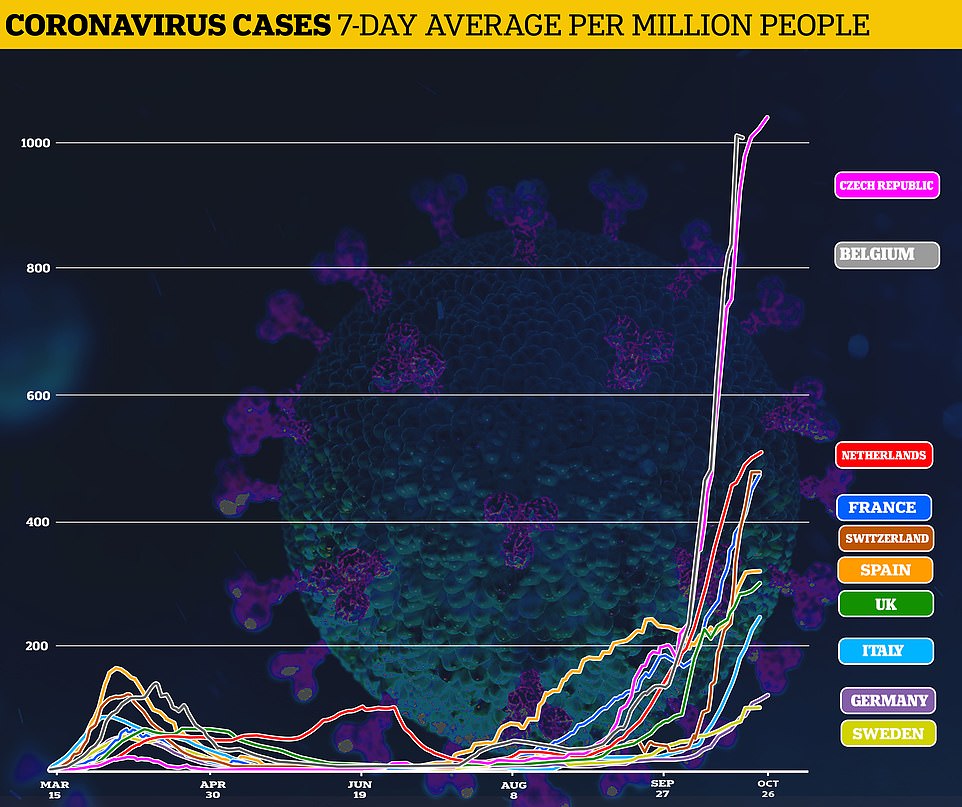 Spain and Italy have both seen infections increase to record levels along with those in France, Britain and other countries, although the Czech Republic and Belgium have the highest rates of any major countries in Europe 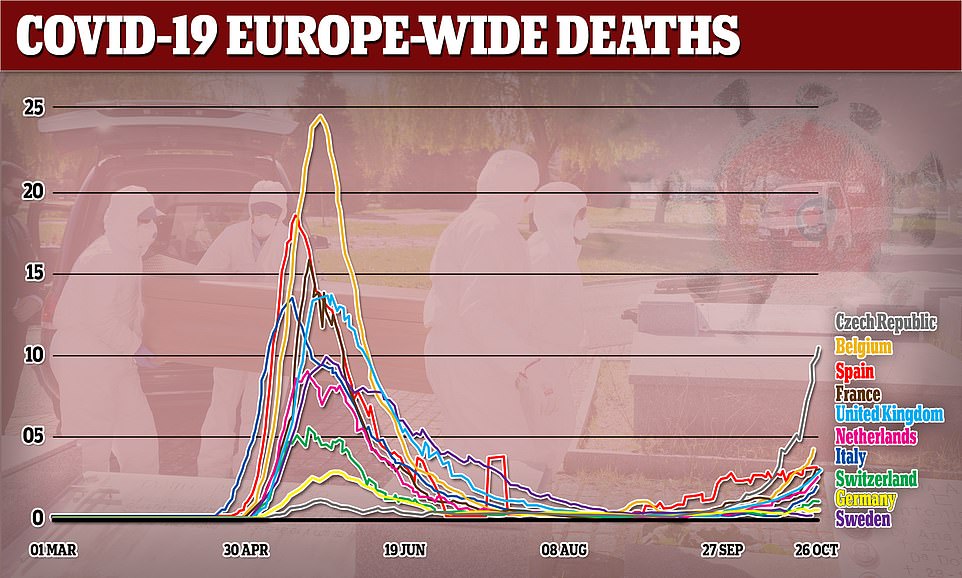 Spain and Italy have both seen deaths increase in recent weeks, although they are lower than during the first wave – unlike in the Czech Republic and other countries in Eastern Europe where deaths have risen to record levels 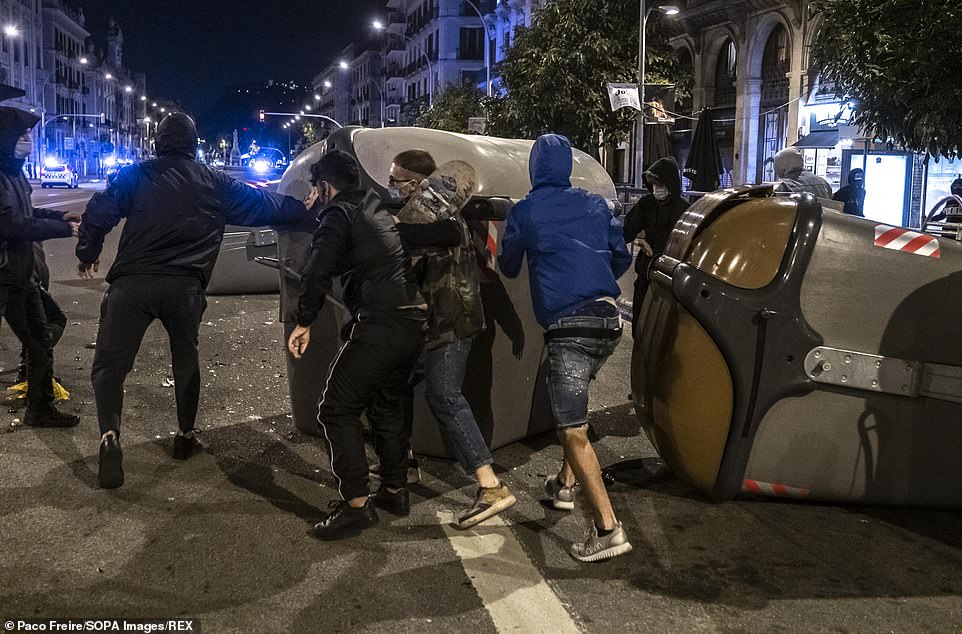 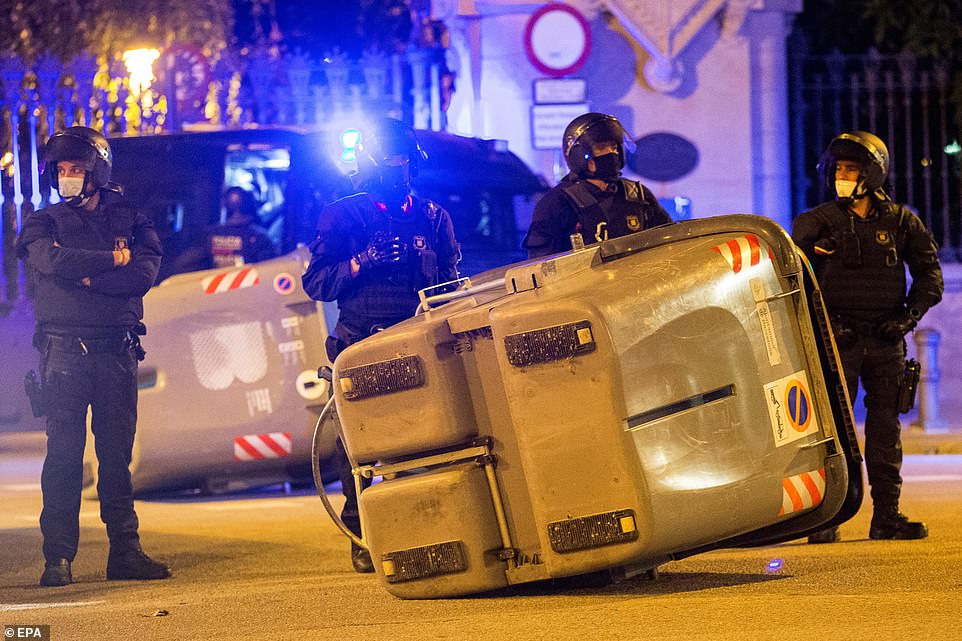 Police in Barcelona stand by one of the overturned rubbish bins as they face off with protesters, some of whom came from a Catalan pro-independence party

In another echo of the spring crisis, Italy’s foreign ministry on Monday advised against unnecessary travel to other European countries and warned that people could get trapped if the situation worsens.

Looking to calm tensions, the government has said it will present a package of measures on Tuesday to support businesses hurt by the new restrictions.

Italy, once the country hardest hit by the pandemic in the industrialised world, has been overtaken by others in Europe including France and Britain. But infection rates have been rebounding rapidly since the start of October.

A number of regions, including Lombardy and Piedmont, have also imposed nighttime curfews.

Many small businesses, still badly bruised by an initial nationwide lockdown in March and April, say the new restrictions could bankrupt them.

While Italians complied peacefully to the spring lockdown, there has been an immediate pushback against the renewed restrictions.

Protesters took to the streets of up to a dozen cities on Monday, including Treviso, Trieste, Viareggio, Latina, Rome, Naples, Salerno, Palermo, Siracusa and Catania.Milan protesters launch Molotov cocktails at police car 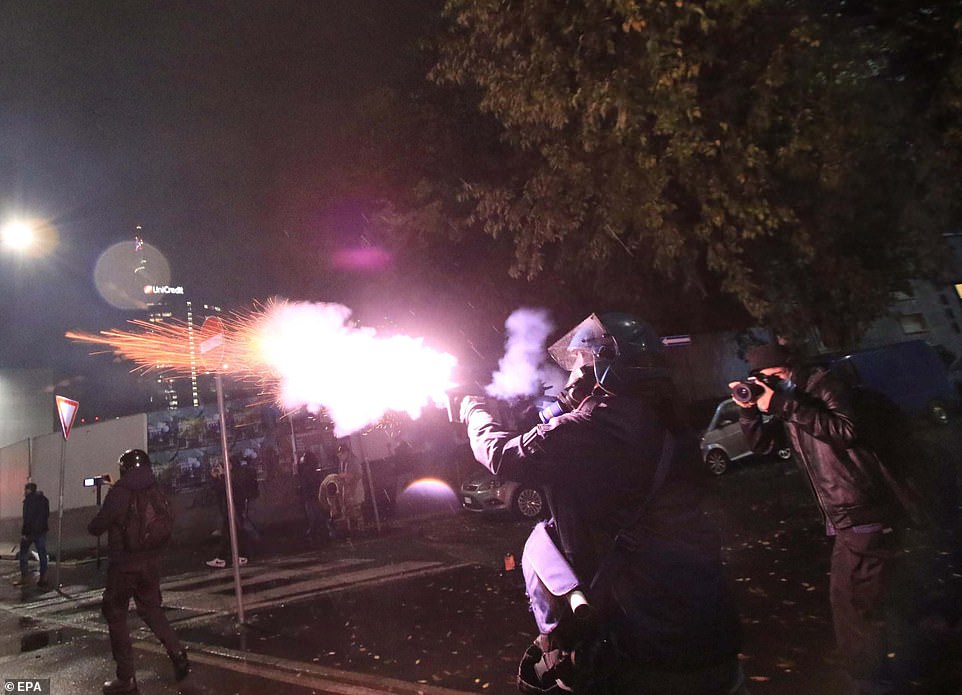 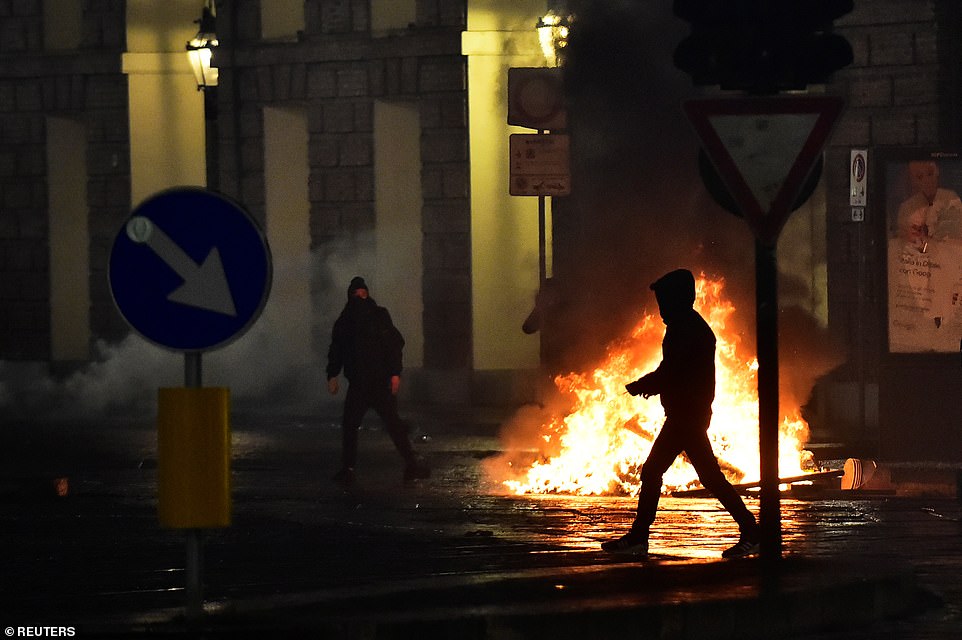 In Turin, police responded with volleys of tear gas as they tried to restore order on Monday night. Pictured: Demonstrators next to a fire in Turin 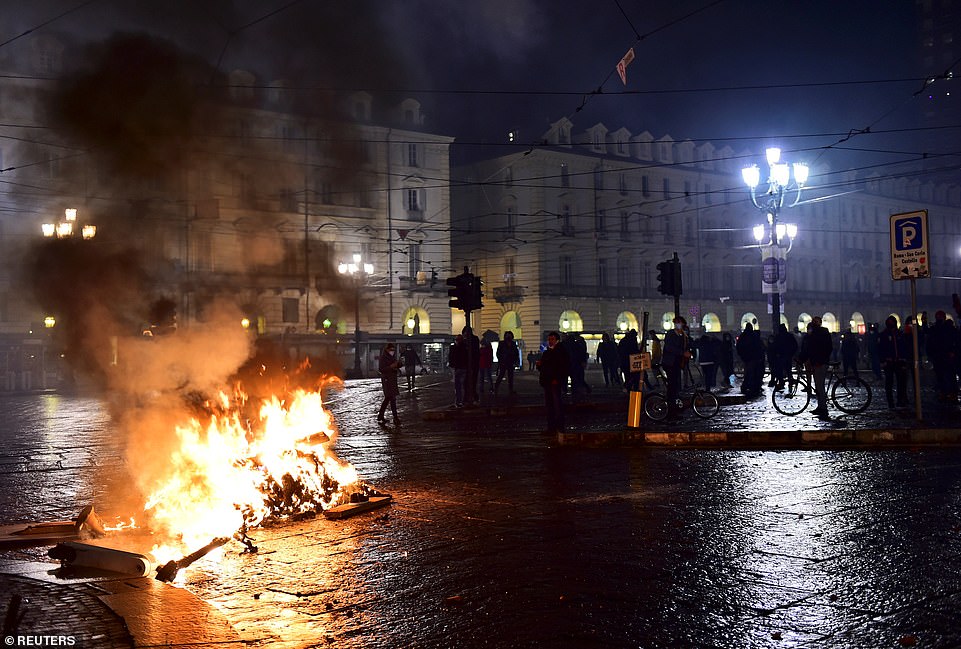 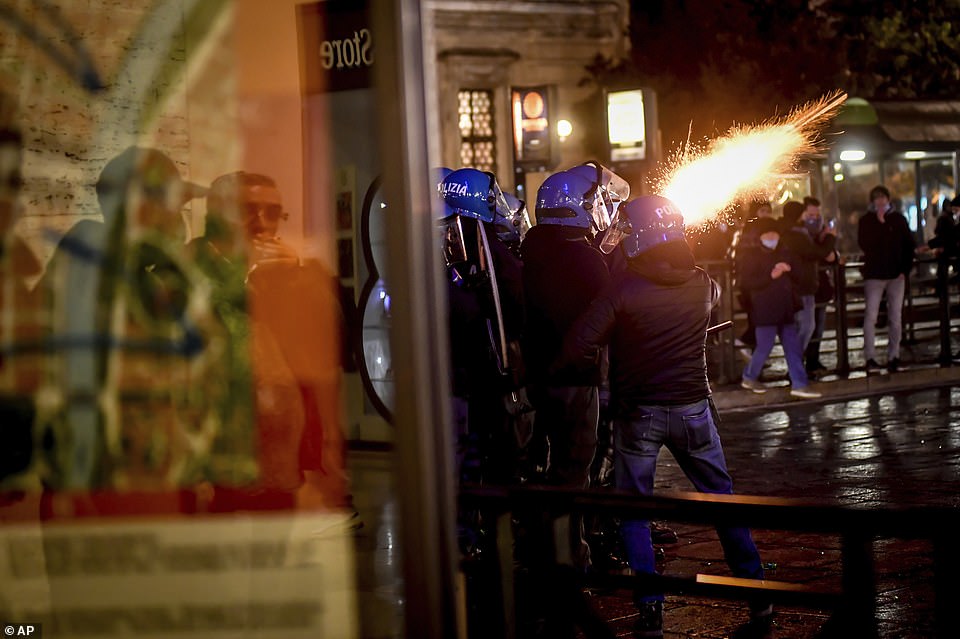 Police fire tear gas as clashes broke out during a protest in Turin on Monday night. Demonstrators were protesting Government-imposed measures to curb the spread of coronavirus 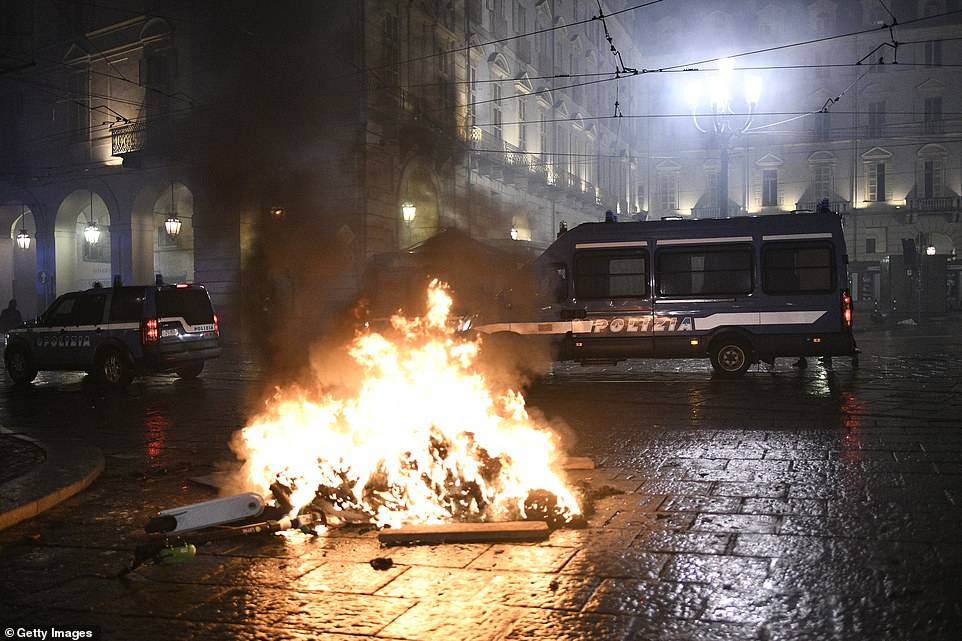 Meanwhile in Spain, authorities in the Catalonia region are considering imposing a lockdown on weekends to fight the spread of the coronavirus.

Vast crowds gathered on the streets of Barcelona – with angry protesters setting dustbins on fire and marching while clutching signs reading: ‘F*** Covid-talism’.

Most participants in the demonstration were wearing masks as they called for clear and effective policies to tackle the economic fall-out brought about by restrictions.

However, the protesters also included Covid-19 deniers, as well as Catalan separatists, Trotskyists and anti-capitalists spraying graffiti that said ‘Confine the rich’, according to Spanish media.

Riot police eventually went in to break up the demonstration, onlookers said.

Disagreements between the Spanish government, regional authorities and the opposition have for months hampered the response to the pandemic in Spain.

This has in turn angered many Spaniards, with analysts saying that the uncertainty might reduce people’s willingness to comply with the measures.