Paul, the voice behind the Off-Grid Desert Farming with Paul & Adrienne YouTube channel, says that a recent earthquake swarm on the Spanish island of La Palma looks unnatural and appears to be manipulated, from what he can see from data posted to the official EMSC-ESEM earthquake app.

The outspoken Internet sleuth says the powers-that-be artificially created the swarm of earthquakes with HAARP or some other tectonic weaponry. Paul says that when you zoom in on the earthquake activity at the Cumbre Vieja volcano, the earthquakes form a “grid-pattern” not characteristic of a natural phenomenon.

“As you can see, multiple earthquakes are hitting over and over again on the same dot,” he explained.

EMERGENCY ALERT FOR LA PALMA!!!! EXTREMELY IMPORTANT!!!! THIS VIDEO COULD SAVE MILLIONS OF LIVES — YouTube

Why do some quake epicenters in the same region seem to be distributed neatly along some sort of grid? 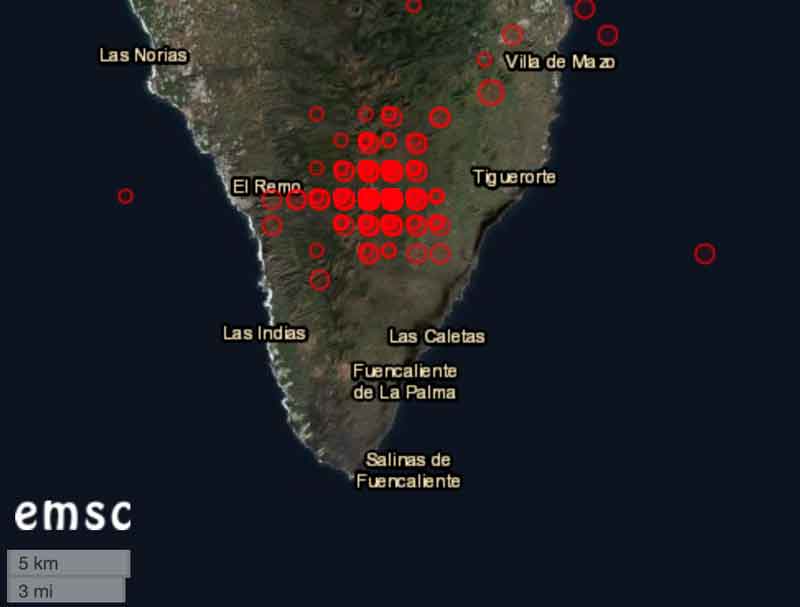 Recent quakes under La Palma Island (Oct 2021), using data from EMSC, apparently aligned on grid caused by rounding of lat/lon values to the second digit after comma, approx. 500-1000 m resolution (image: EMSC)Sometimes, when you zoom in a lot on maps showing earthquake epicenters, the locations are arranged on parallel N-S / E-W grid lines. As a recent example, using quakes under La Palma Island in Oct 2021, as reported by the European-Mediterranean Seismological Centre (EMSC), the quakes appeared to align themselves neatly into a grid-like pattern.

This apparent grid is an artifact caused by the necessary rounding of values, and not reflecting the real positions, where quakes are more scattered. But since the calculated values used for display are only as good as their margin of error, the latitude/longitude values of quake locations are rounded according to their margin of error coming from the data.
In the above case, the latitude / longitude values are rounded to the second digit after the decimal point (e.g. 28.56°N / 17.82°W), which corresponds to a resolution of approximately 500 meters to one kilometer.
Taking quake data from the Spanish national institute, who run a denser network on the island and can pinpoint locations with higher precision, the same quake location was given as: 28.5594°N / 17.8292°W – in this case, the 4 digits after the decimal corresponds to a resolution of around 10 meters only!

But why are values rounded?
If the size of the last digit (e.g. 0.01, 0.001 for 2 or 3 digits after the decimal point) is larger than the error span of the measurement, the implied level of accuracy would be wrong.

Example:
1) Let’s assume a fictive quake’s true epicenter at a location of 35.35768962… N / 25.93617482… E.
2) Now, let’s assume that the accuracy of possible detection by instruments is only maximum 0.01 deg latitude or longitude.
3) However, numerical seismic calculations will still give a raw result with as many digits as the used bit depth of the computer running the calculations allows, something as:
35.350108457… N / 25.94016237809.. W.
4) While this might seem extremely accurate, it is not. If the precision of the data only allows an accuracy of approx. 0.01 degrees latitude or longitude, it makes no sense to publish more digits, and actually only gives a false impression of accuracy.
Most agencies will therefore round the results to a value that reflects the accuracy by the value of the last digit, typically 0.01 or 0.001 degrees. In this case, the quake’s epicenter might be published as 35.35 N / 25.94 W.

Plotted data always will fall into a grid
If there are many quakes in an area where the quakes are closer together than the maximum resolution of the latitude/longitude calculations, the map will show many quakes ending up with the same rounded latitude or longitude value. The quakes will then be arranged neatly on the map in a grid-like pattern corresponding to these rounded values.
In reality, the quakes are of course not aligned on this grid, but had occurred under their true locations, which cannot be identified to a more accurate degree and remain unknown.

Why are the same quakes often at different places when published by different agencies?
Agencies such as EMSC, who monitor quakes worldwide, use a larger network with broader coverage, but with less accuracy for individual quakes. On the other hand, regional agencies specialize in specific areas, often using a smaller and more local but denser network of stations, which enables them to pinpoint locations more accurately, for example, to a level between 10 and 100 meters.

At VolcanoDiscovery we combine the best of both. We first present reports from key global agencies, as these offer fast detection but less accuracy in terms of location and sometimes even magnitude. We then update the quake data with regional information from local agencies, where it is available and as soon as it is available, to bring you the most accurate location possible.

2 thoughts on “Evidence That La Palma Eruption & Earthquakes Are Part of an Artificial Attack!”