Moscow has for years been seeking to secure the Alexander’s Courtyard church compound, but a recent court decision set back its plans by nullifying recognition of its claims to the complex, located near the Church of the Holy Sepulchre.

The report said the letter indicates the importance that Moscow attaches to the matter, and that Jerusalem officials are worried the subject could exacerbate tensions with Russia, already on the rise over its invasion of Ukraine.Keep Watching

Israel has tried to balance good ties with Russia needed for security operations in Syria against the growing international alarm at the conflict in Ukraine, where Moscow faces accusations of war crimes and genocide following the February invasion of its neighbor.

Ynet said the letter was revealed by Sergei Stepashin, a former Russian prime minister who is chairman of the Imperial Orthodox Palestine Society, which oversees Russian properties in the region. Stepashin is on a visit to Israel and brought up the matter during a gathering at Sergei’s Courtyard, another property that was handed over to Russia a decade ago, at a time of similar claims to ownership.

Stepashin said that Russia provided all of the necessary paperwork to show it is the rightful owner of Alexander’s Courtyard, but then the Ukraine conflict started and, in the meantime, Israeli authorities “decided to not decide.” 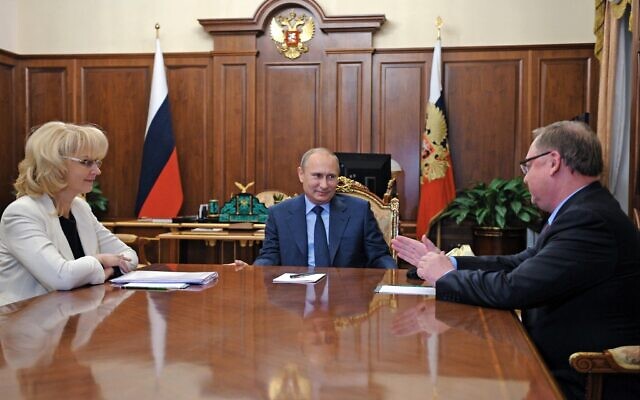 Stepashin said Russia will apply diplomatic pressure if necessary to get what it wants, Ynet said.

Russian analyst Alex Tenser has assessed that Israel is wary of handing over the property at a time when Russia is being sanctioned by many Western countries, due to its invasion of Ukraine, the website noted.

The Jerusalem District Court verdict was given following a petition by the Orthodox Palestine Society of the Holy Land, which owned the property until last year.

In 1859, Czar Alexander II purchased the land on which Alexander’s Court — also known as the Alexander Nevsky Church — was built. Until the Russian Revolution of 1917, the area was under the control of the Russian Imperial government.

The move was seen as a goodwill gesture following Russia’s release of Naama Issachar, a young Israeli woman who was imprisoned after a small quantity of marijuana was found in her backpack during a layover in Moscow.

After the Russian government was registered as the rightful owner of the church, the Land Registry Commissioner responded to a string of appeals against the move, explaining that the Russian Federation had been recognized by international bodies and by the State of Israel as a “continuing state” of the Russian Empire.

In his decision on the appeal, Judge Mordechai Kaduri ruled that since Netanyahu had designated Alexander’s Courtyard as a “holy site,” the only body able to decide on the matter is the Israeli government, given various religious and political considerations.

Bennett set up a panel on the issue last July, but it has yet to convene.