By GLEN KEOGH and NIAMH LYNCH FOR THE DAILY MAIL

Capable of striking a target 11,200 miles away, the nuclear-capable Sarmat RS-28 is said to be the world’s longest-range intercontinental ballistic missile.

Putin described the launch as a ‘big, significant event’ for Russia’s military and claimed the weapon can overcome all modern defence systems. 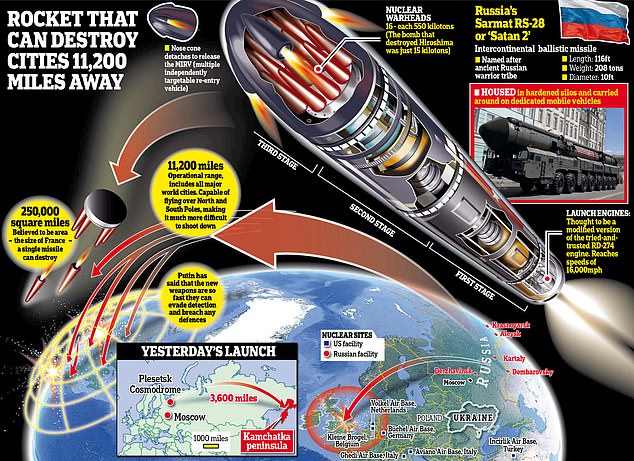 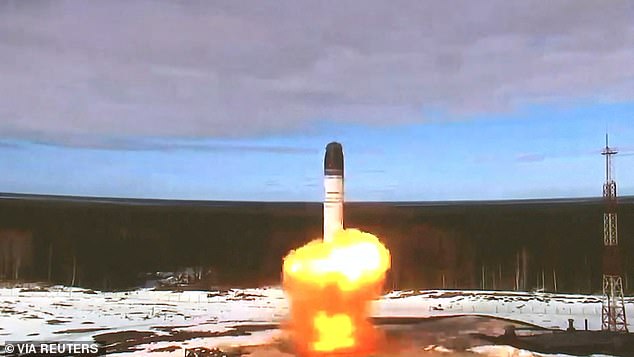 The launch from the Plesetsk Cosmodrome in northern Russia launched practice warhead at the Kura firing range some 3,600 miles away

However the US described the testing as ‘routine’ and dismissed any global threat.

Launched from the Plesetsk Cosmodrome facility in northern Russia, the missile’s practice warheads hit targets 3,600 miles away at the Kura firing range in the Kamchatka peninsula.

If fully armed, it can deliver a payload big enough to destroy an area the size of France.

In remarks televised around Russia, Putin congratulated the military on the launch, adding: ‘This truly unique weapon will strengthen the combat potential of our armed forces, reliably ensure the security of Russia from external threats and make those who, in the heat of aggressive rhetoric, try to threaten our country, think twice.’

He added it was ‘capable of overcoming all modern means of anti-missile defence.’ Dmitry Rogozin, director of the Russian space agency Roscosmos, said the weapon was a ‘present to Nato and all sponsors of Ukro-Nazism’, a reference to the outlandlish propaganda claims that Kyiv is run by neo-Nazis.

Despite the timing – coming as Western countries pledge further heavy weaponry to aid Ukraine – the Pentagon said it was notified by the Kremlin of its intention to launch the weapon.

Initial tests of the missile took place in 2017 and the first full-scale launch was delayed from December, prior to Russia’s invasion of Ukraine.

The RS-28 Sarmat is designed to replace the R-36, which had been nicknamed SS-18 Satan by NATO.

Describing the successful launch, a statement from Russia’s defence ministry said: ‘Sarmat is the most powerful missile with the longest range of destruction of targets in the world, which will significantly increase the combat power of our country’s strategic nuclear forces.’

Capable of travelling at up to 16,000mph, it can deploy multiple warheads and other weapons towards targets at hypersonic speeds, making it extremely difficult to bring down.

It will be able to launch the Avangard, Russia’s first hypersonic missile, which can travel at the top of the Earth’s atmosphere at more than ten times the speed of sound.

Putin has previously described the weapon as ‘invincible’. The original Soviet-era Satan missile has been in service since the 1970s, while ‘Satan II’ is said to have been in development since the early 2000s.

‘By the time they [the West] find an antidote, we must have found another solution to this. And today we are working on it. There are developments, there is work in progress.

Jack Watling, of the Royal United Services Institute defence think-tank said the timing of yesterday’s test was mere posturing by Putin ahead of Russia’s Victory Day on May 9, where the Kremlin shows off its weapons.

‘The timing of the test reflects the Russians wanting to have something to show as a technological achievement in the lead-up to Victory Day, at a time when a lot of their technology has not delivered the results they would have liked in Ukraine,’ he said.

When Putin invaded Ukraine in February he made a reference to his nation’s nuclear deterrents, warning the West that any major intervention would ‘lead you to such consequences that you have never encountered in your history’.