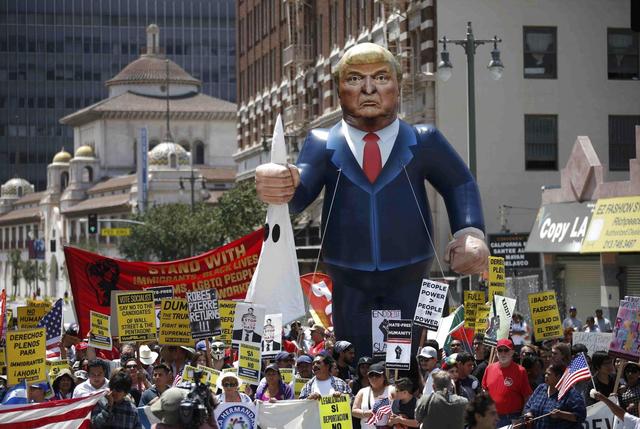 People march with an inflatable effigy of Republican presidential candidate Donald Trump during an immigrant rights May Day rally in Los Angeles, California, U.S., May 1, 2016.

Hundreds of people marched through Los Angeles on Sunday in May Day rallies that took aim at Republican presidential front-runner Donald Trump for his anti-illegal immigration platform that includes building a wall along the U.S. border with Mexico.

The rallies in America’s second most populous city, which has a large immigrant population, came just days after protesters smashed the window of a police car and blocked traffic outside a Trump campaign event in Costa Mesa, California, 40 miles (64 km) southeast of Los Angeles.On Friday, demonstrators blocked the entrance of a hotel hosting the California Republican convention in Burlingame, south of San Francisco, forcing Trump to halt his motorcade and go through a back entrance to deliver his speech.Protests have become common outside rallies for Trump, 69, the New York billionaire businessman.

He has aroused criticism for his pledge to deport all the country’s illegal immigrants, even as it helped propel him in the race for the Republican nomination for the Nov. 8 election to succeed Democratic President Barack Obama.

He has accused Mexico of sending drug dealers and rapists across the U.S. border and has promised to build a wall along the southern border and make Mexico pay for it.Three separate marches were planned in Los Angeles on Sunday and began peacefully around noon, with several hundred people championing a variety of causes, including immigrant and worker rights.Trump said on Sunday he will have essentially sealed the Republican nomination if he wins Tuesday’s contest in Indiana, where he holds a big lead over chief rival Ted Cruz, a U.S. senator from Texas.California holds its presidential primary on June 7. 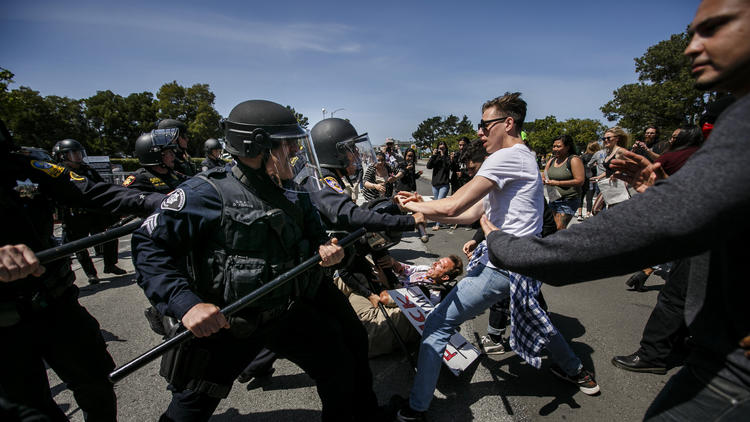 Trump protesters clash with police outside the California Republican Convention in Burlingame, Calif.

Trump faced large and hostile demonstrations outside a rally Thursday night in Costa Mesa and at the Burlingame hotel where he delivered a speech to the California Republican Convention on Friday.

“I think it’s going to get worse if he gets the nomination and is the front-runner. I think it’s going to escalate,” said Luis Serrano, an organizer with California Immigration Youth Justice Alliance. “We’re going to keep showing up and standing against the actions and the hate Donald Trump is creating. We are going to continue to just show up in numbers and stand together.”

Trump has faced protests during several stops in California over the past few months, but they escalated considerably this week.

The billionaire businessman is leading in several polls of California Republican voters. But his outspoken comments about people in this country illegally and advocacy for a border wall have sparked a backlash by younger Latinos, said Carlos Perea, an immigrant rights organizer who was at the Costa Mesa rally.

“Young people went to the streets and said ‘We’ve had enough of this,’ ” he said.

The next test could come Sunday, when a May Day rally is planned in downtown Los Angeles.

Los Angeles police have been meeting with demonstrators for some time in order to ensure a peaceful protest.

“We expect May Day to be peaceful,” LAPD Asst. Chief Michel Moore said. “We are always prepared for any eventuality were anything to happen. But we have nothing to suggest that will be the case.”

Protest organizers in Southern California said the anti-Trump demonstrations spread through word of mouth and involved mostly young people, including many high school and college students. They brought with them Mexican flags, which were once discouraged at immigrant rights rallies for fear they would be regarded as un-American.

The demonstrations outside the Pacific Amphitheatre in Costa Mesa on Thursday night blocked traffic and caused tense moments. Some protesters performed screeching burnouts in their cars or did doughnuts at intersections. Others kicked at and punched approaching vehicles, shouting expletives. Ranchera and hip-hop music was blasted throughout the streets. At least 17 people were arrested, and both a Trump supporter and a teenage anti-Trump protester were hurt.

Some have expressed concern about the tenure of the protests.

“While I share the community’s anger and frustration, destroying public property is not the answer,” Rep. Linda Sanchez (D-Norwalk) said Friday in a statement. “When we resort to violence, we’re playing into the very hands of people like Donald Trump. I believe the solution must be peaceful protest and more importantly, directing our energy toward shifting our voter-registration efforts into high gear.”

In Burlingame, five protesters were arrested and a sheriff’s deputy was injured during the Trump protest there.