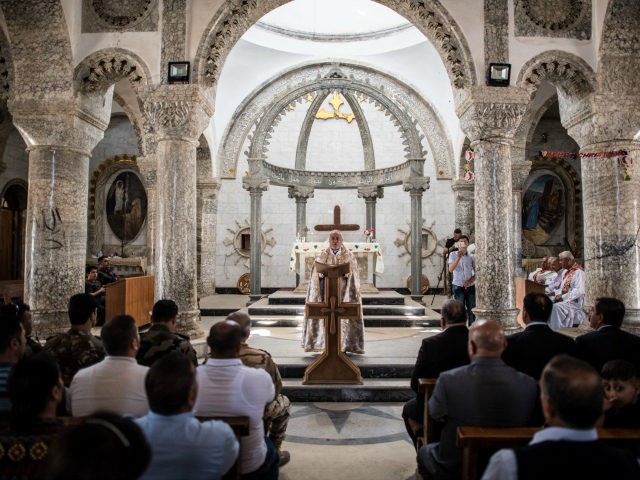 U.S. President Donald Trump’s administration is helping bring Christians and Yazidis in Iraq back from the brink of extinction fomented by a genocidal campaign at the hands of the Islamic State (ISIS/ISIL), religious minority representatives declared this week at the second Ministerial to Advance Religious Freedom convened by the Department of State.

The U.S. government has officially determined that ISIS committed genocide against Christians, Yazidis, and other religious minorities during its reign of terror in the Middle East that began in 2014, prompting the Trump administration to launch a multi-million-dollar program to help the victims. Several religious leaders and organizations warned that the two groups were facing extinction in the wake of the ISIS genocide.

Echoing Yazidis activists and a U.S.-based Syriac Catholic Iraqi priest who spoke to Breitbart News, a Chaldean Catholic priest from a parish in a Christian Iraqi town indicated that hope for the future along with security improvements have returned to religious minority communities devastated by ISIS, courtesy of the Trump administration efforts.

Their comments came during the three-day ministerial summit launched by the State Department on Tuesday.

While delivering a speech during the event on Wednesday, Fr. Thabet Habib Youssef, a Chaldean Catholic priest from the town of Karamles in Iraq’s Nineveh province, thanked the Trump administration for its assistance.

I wish to give thanks to the government of the United States for including us in this important conference and a special thanks to the administration of President Trump for his concern and commitment to the persecuted minority communities in Iraq.

I can say this conference gives us hope. Our greatest fear in the early years was that the world would forget us. This conference tells us we are not forgotten.

Nearly half of the Christian families who fled Karamles, liberated by U.S. and local forces in November 2016, have returned and Fr. Thabet expects many more to come back in the coming year.

Although ISIS burned down the homes and churches in the Christian town, “We are determined to return and rebuild,” he proclaimed.

“Today we have 45 percent of our families returned and we hope in this next year we will see many more,” he added.

He went on to say that the Iraqi government needs to do more to bring about “real change and support for the protection, safety, and equal rights for the minority communities of Iraq.”

The U.S.-funded nation-building efforts, coupled with assistance from the Catholic group Knights of Columbus and the government of Hungary, have rendered the town of Karamles a “story of success and we are optimistic it will survive,” Thabet also said.

Northern Iraq’s Nineveh province is the historical homeland of Iraqi Christians and home to the largest concentration of religious minorities in the country. Sinjar, the ancestral home of Yazidis, is also located in Nineveh province.

Yazidis bore the brunt of ISIS’s genocidal campaign. 350,000 of them remain displaced in Iraqi Kurdistan and 3,000 of their women, many sold into sexual slavery, remain missing, Nadia Murad, a Nobel Peace Prize recipient who survived the jihadis group’s atrocities noted during the ministerial summit Tuesday.

Haider Elias – the president of Yazda, a U.S.-based global Yazidi non-governmental organization (NGO) – told Breitbart News that the situation for Yazidis is starting to change under the Trump administration, noting that the U.S. government is trying to bring them back to Sinjar.

“These things are going to potentially change the lives of Yazidis and their view that it’s going to be a good place for them to live,” he added.

Elias noted that security has improved in Sinjar, a town decimated by ISIS jihadists when they captured large swaths of Iraq and Syria in 2014.

“The security situation has changed for the better in the Sinjar area. ISIS has been defeated thankfully. … Half of Yazidi lands used to be under ISIS control before the [Trump] administration took over and what has happened recently is every single Yazidi village has been liberated from ISIS,” he told Breitbart News.

Although the U.S. completely annihilated the ISIS territorial caliphate in March, the jihadi group remains an insurgency menace, the Pentagon’s inspector general has warned.

“Yazidis are still facing the threat of genocide. ISIS has been defeated militarily, but they have not lost their ideology, manpower, and support,” Hadi Pir, the vice-president of the Yazda NGO, acknowledged.

Yazda is benefiting from the Trump administration’s decision to directly assist religious minorities through U.S. Agency for International Development’s (USAID) and faith-based partners instead of paying for U.N. programs that can divert money to other projects, a move praised by the Christians and Yazidis alike.

“The U.S. has always been a symbol of freedom for persecuted people around the world. If minorities like Yazidis and Christians would have vanished from the Middle East, it would show the world the United States is not invested in promoting its values and a lot of people would lose hope,” Pir told Breitbart News.

“But now that this administration has intervened, the hope is back,” he added.

Echoing the Yazidi activist, Fr. Muntaser Haddad from the U.S.-based St. Ephrem Syriac Catholic Church said that the Christian community in Iraq is also optimistic about their future.

The priest, originally from the Christian Iraqi town of Qaraqosh in Nineveh province, told Breitbart News, “There is hope among the Christians in the Middle East now that the United States is helping them.”

The future of Christianity and other religious minorities in the Middle East is contingent upon the continued assistance of the United States, the priest indicated.

During the ministerial summit, however, Fr. Thabet warned against “the problem of the culture of dependency,” adding:

There is a time and place for humanitarian aid and assistance as displaced minorities of Iraq have needed in these past years. However, as Christians, we believe that every person is called to a life of dignity, including the dignity of work and responsibility for themselves as human beings.

Much of the Middle East has already been made to be a place of permanent beggars. We all know the result, and it’s not good.

The American taxpayer funds have been used for nation-building efforts of areas devastated by ISIS.