Almost 24,000 people have now been infected with the deadly coronavirus and China says 65 more people have died overnight.

According to official figures, almost 24,000 people have now been infected with the deadly coronavirus which has now led to 492 deaths.

There was 65 more fatalities reported overnight from China’s Hubei province — the epicentre of the infectious disease’s outbreak — marking a daily record for deaths from the disease.

The total number of infections stands at 23,858 and the virus is now spreading so fast that cases are “doubling every five days”, Britain’s Health Secretary Matt Hancock said.

He said dealing with the fallout would be a “marathon, not a sprint”,

Mr Hancock told the UK House of Commons the virus will be “with us for at least some months to come” as the country warned all Brits in China to leave “if they can”.

Two people have died outside of China – in Hong Kong and the Philippines.

It comes as Wuhan converts three venues including a gym and exhibition centre known as “Wuhan Livingroom” into hospitals for the virus. 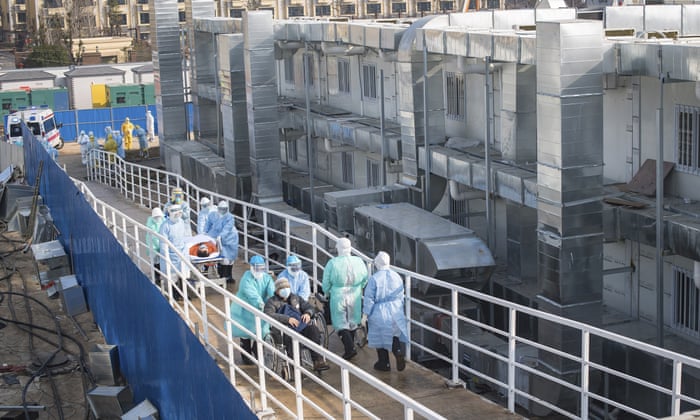 Medical workers in protective suits help transfer the first group of coronavirus patients into the newly completed Huoshenshan temporary field hospital in Wuhan, China. Photograph: Xiao Yijiu/AP
[Editor’s Comment]
They have just completed construction on the first of two hospitals allowing for 1000 new beds per hospital, and now they needing to open up a Gymnasium giving them an additional 3400 beds?? This is out of control.

More than 3400 beds will be made available in addition to the extra 2600 beds that will be provided in two brand new hospitals, one of which is finished and one remains under construction.

Beds are set up in the Hongshan Gymnasium in Wuhan in central China’s Hubei Province to help provide extra beds for those afflicted with the virus. Picture: Xiong Qi/Xinhua via AP.Source:AP

1918 Spanish Flu: Can anyone see the similarities?

Pedestrians wear face masks as they prepare to cross a road in Hong Kong, which became the second place outside mainland China to report a death from the disease. Picture: Anthony Wallace / AFP.Source:AFP

NO PEAK YET, DOCTOR WARNS

Dr David Heyman – who led the World Health Organisation’s (WHO) response to the 2002-03 SARS outbreak – said it’s too early to tell when the new coronavirus will peak, but that it appears the disease is still on the increase.

He said the increase in Chinese cases recently can be partly attributed to the fact that Chinese officials expanded their search to include milder cases, not only people with pneumonia.

Dr Heymann declined to predict whether the virus would ultimately cause a pandemic, or worldwide outbreak. According to WHO, a pandemic requires sustained transmission of a disease in at least two world regions.

Almost 24,000 people have been infected by the virus. Picture: AP PhotoSource:AP

He said as the new virus starts to spread beyond China, scientists will gain a much better understanding of the disease.

“What we will see is the clearer natural history of the disease,” he said.

“That will occur because all the contacts of people who have come into contact into these countries (where the virus has been exported) are being traced and watched very closely.” SARS, or severe acute respiratory syndrome, is an illness from the same virus family as the current outbreak.

Many countries are evacuating citizens from China and have stopped airlines flying there. Pictured above, a pilot wears a protective suit on a cargo plane in Wuhan. Picture: Cheng Min/Xinhua via AP, File.Source:AP

Even a pilot realises how serious the situation is….

The WHO said the virus does not yet constitute a pandemic, but rather “an epidemic with multiple foci,” according to Sylvie Briand, head of WHO’s Global Infectious Hazard Preparedness division.

She said outside of Hubei, the world is seeing “spillover cases” and wants to make sure we don’t have a “second Hubei type of scenario.”

“To stop transmission of this virus, it is very important that sick people wear masks” to avoid infecting others, she said, adding though the benefits of healthy people wearing masks as a precautionary measure were less clear.

The respiratory disease spreads through droplets, for instance when people sneeze or cough, or likely through direct contact with infected people or with objects they have touched.

“Masks alone are not enough. It is a package of measures that you have to put in place,” she said.